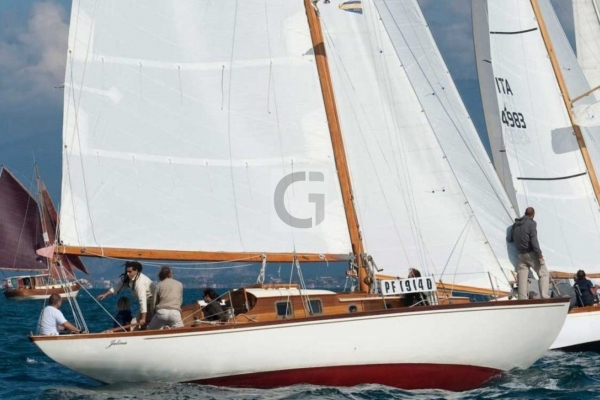 “Un magnifique animal de course” this is how, in 1953, the French magazine Le Yacht described JALINA, born from the pencil of the established French designer Eugène Cornu.

At the time the boat had already shown how much it was worth, winning in 1947 the Cowes-Dinard and the Cannes-Portoferraio.

In 1953 he won the first Giraglia, repeated in the two following years in his own class. Other victories were won by Porto Azzurro-Anzio in 1955 and at Ajaccio-Monaco in 1957.

The originals designs from Mr. Cornu are now held in the Musee National de La Marine in Paris as JALINA was one of the first sailing boat to gain victory in some of the most ambitious regattas against the English boats.

JALINA was bought by her current owner in 2007 and she has been completely restore in Elba Island from Bonacina brothers between 2007 and 2010. Her highlights include:-

JALINA is now for sale as her owner already embark on a new project and wish to find a passionate sailor who would like to take care of this beautiful boat.