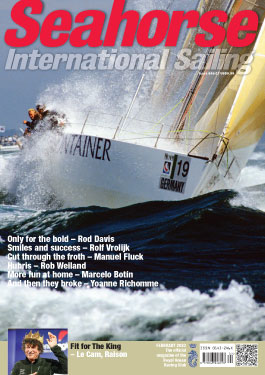 When men were men
GUY GURNEY

Mr Scow
DAVID RAISON’S impact on yacht design has been a game-changer of the highest magnitude. But for his first Imoca he is doing something different yet again. JEAN LE CAM, PATRICE CARPENTIER, IAN LIPINSKI

Nuts and bolts
There is constant noise about improvements in design tools of every type, from hull lines to appendages to hull and rig aerodynamics… and much else in between. But how much of that noise is just froth and how much is actually of any use? MANUEL FLUCK looks behind the marketing

If it’s good enough for the Cup...

For all the right reasons
FREDERIC BOUVIER

Update
A setback for the Poms while Team NZ gets out the glue (again) and American Magic racks up the (full-scale) miles, of burning rags and flaming Minis, the World Match Racing Tour remains front and centre when it comes to offering the opportunities. Plus remembering the brilliant MERVYN COOK. TERRY HUTCHINSON, JACK GRIFFIN, JAMES PLEASANCE, DAVE HOLLOM, MAGNUS WHEATLEY

World News
Record breakers all… GLENN ASHBY gets his dry lake, YOANN RICHOMME keeps it all in one piece, as does THOMAS RUYANT, Ocean 50s upside down (again), MARCELO BOTIN is just happy to be working close to home again, Mister 18-footer is pretty handy with his Maxi too. Plus time to get the USA offshore again? DOBBS DAVIS, PATRICE CARPENTIER, IVOR WILKINS, BLUE ROBINSON, CARLOS PICH

Rod Davis - Not for the faint-hearted
Who’d be an Olympic selector… in fact, who’d ever want to put their name to the process at all?

IRC – Finessing the product
An eye to development, cost and safety. And the existing fleet. JASON SMITHWICK

And so it begins…

Seahorse build table – Standout
There are now superb choices out there if you are looking for a modern, fast, large cruising catamaran. It’s a smaller offering when it comes to big cruising trimarans but designer MARC LOMBARD has absolutely nailed it…

Sailor of the Month
Champion racer vs champion match racer