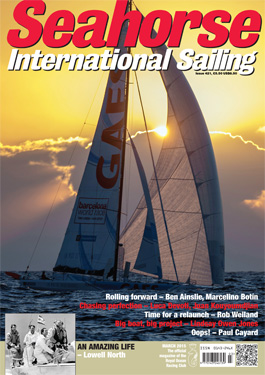 Why not now?
The time and market situation are now right for a relaunched Admiral’s Cup, says ROB WEILAND

The (other) Pope
DOBBS DAVIS was fortunate enough to count LOWELL NORTH among his early skippers. He reflects on a quite extraordinary journey…

Fantastica!!!
There was never going to be any shortage of enthusiasm when LUCA DEVOTI sat down with designer JUAN KOUYOUMDJIAN to create an all-new Finn

World news
LOÏCK PEYRON is France’s Sailor of the Year, the new Tour Voile is an instant sell-out, the Vendée Globe is in rude health, the boys are having (foiling) fun on Auckland harbour, the Wild Oats holds off the Comanche to Hobart (as ‘HICKO’ wins again), and a new sailing initiative finds its way into the USA. BLUE ROBINSON, IVOR WILKINS, PATRICE CARPENTIER, DOBBS DAVIS

RORC news
How fast was the Fastnet entry filled up… 300 boats in 24 minutes! EDDIE WARDEN-OWEN

Sailor of the Month
Champion sailor vs champion yacht designer