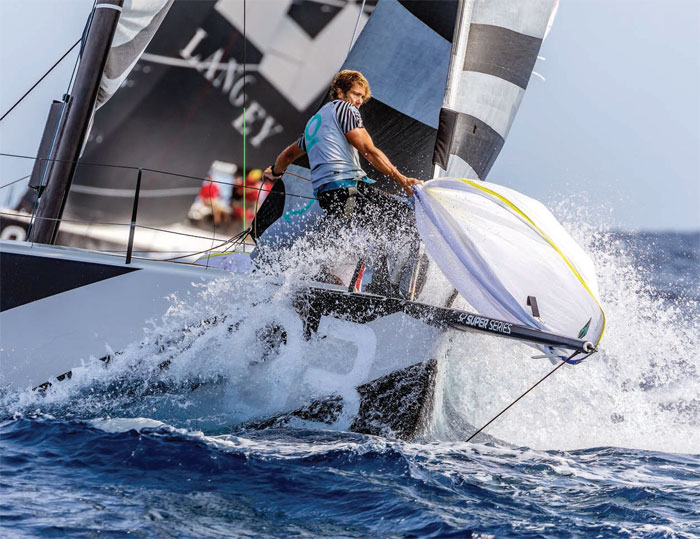 On the threshold of the 52 Super Series’s 10th year of competition it is pleasing to see this season shaping up with so much promise. Things seem to change in a heartbeat in this world but it seems shore teams are now busy finessing the off-season optimisations in preparation for another demanding and close-fought season. New appendages are perhaps not as numerous as some originally mooted but the word in the yards is that two boats at least have gone for this option, although the future of one – Bronenosec – is not clear at the moment.

When you consider that the circuit’s first event in May 2012 saw just five boats on the dock in Barcelona, and only four raced the full series, it is especially gratifying for owners, key stakeholders and supporters to consider that we are going into 2022 with 10 boats expected at each of the five regattas. Of these six or seven will start the first race of the year with genuine hopes of winning a regatta and finishing on the championship podium in Barcelona at the end of the season. Even more remarkable perhaps, there really is no predicting who the 2022 champions will be.

But success is not just measured by the healthy number of teams but by how polished and aspirational the circuit is. And here all the hard work and commitment continue to pay off… the TP52 Super Series remains the pinnacle of grand prix monohull racing.

Since that first year the media output has also evolved to create a unique brand that is recognised throughout the grand prix sailing world. Even if the 2021 season was curtailed the cliffhanger finale in Palma enthralled a considerable global audience, the perfect launching point for 2022.

Main picture: Greg Gendell earns his keep last year on the bow of Quantum Racing at Menorca Sailing Week where the US team finished runners-up behind tuning partners Platoon. Quantum are four-time Super Series champions but have not taken an overall title since 2018 – their run of success inevitably impacted by the heavy involvement of many of their team members in the American Magic Cup programme

The 52 Super Series was very early in its focus on sustainability and ocean and environmental responsibility and has been at the forefront of the movement in the racing arena. Again we have sought to keep the messages relevant and pragmatic; not preaching or browbeating, rather always trying to hold a positive mood. We are proud to have led from the front on single-use plastics, recycling and providing a high-quality drinking water source (thanks to Blue Water). Now it is about further educating and supporting venues, marinas and clubs and leaving a positive legacy to return to. We are especially proud to be donating unused food to local groups at all of our venues and have directly fed many hundreds of individuals in recent seasons.

But for 2022 the series will expand and diversify these messages, taking a broader view and interfacing with ambassadors from other interesting initiatives elsewhere The objective is to reach out to a wider audience beyond sailing, which right now is being saturated with well-meaning but often intangible messages. The circuit will also act as a beacon for change under the Kick Out Plastic banner, interacting with ambassadors from a range of different sports.

With four or five of our TP52s all sail testing in Valencia prior to race 1, it will be exciting to have three premium sailmakers in the arena this year with Doyle joining the fray against Quantum and North, the incomers powering Interlodge and Platoon.

Sail designer and Platoon strategist Jordi Calafat was in Key West to sail with the first-generation Doyle TP52 sails on Interlodge. As ever he plays his cards very close to his chest. With four years using the same generation of platform, sail designs are so well refined that the differences now are tiny between the different brands’ thinking. Calafat’s move from Quantum is thought to stem more from his time with American Magic than being particularly unhappy with the 52 sail programme, but it gives him opportunities to broaden his experience getting more involved with the Superyacht regattas where Doyle Sails are of course hugely successful.

Calafat explains his TP design thoughts for 2022: ‘We have been happy with the flying shapes we had last year so we have very much stuck to the same concepts and panel layouts.

‘Every year there are little tricks regardless of where you work or what you are building. So you do what has to be done. But I don’t expect any change of flying shapes or anything major. Instead we have been working more than anything on the structures.’

He highlights, ‘In such a refined class as the TP52 it becomes about relying on your boat then focusing on how the trimmers work together more than the brand of sails. It is about understanding what the boat needs and what the trimmers need. But obviously there is still the line where there is a difference between the Botín and the Vrolijk designs, they are different animals.

‘We have been discussing things and trying to improve the uprange performance of our Vrolijk design, but we don’t want to lose our excellent light-airs performance… so really we have ended up not doing very much at all! We updated a few little bits of the rigging but nothing major.’

Quantum should be pleased to have three teams using their sails this season, Tony Langley’s Gladiator returning to the green and black and the Whitcraft family from Thailand setting out on their first full season with the support of the Quantum three-boat programme. Without doubt their set-up is now well proven, even if latterly the flow of information between Platoon and Quantum is said to have flowed mainly in one direction!

Nevertheless the Quantum squad’s level of data collection and analysis under James Lyne is a proven fast track to reach the best performance as quickly as possible. Both these Quantum boats will have their own designers – Andy Estcourt on Gladiator and Mário Trindade with Vayu who will also take on a coaching role.

Ed Reynolds, Quantum Racing’s programme director, contends, ‘The whole thing about sail development is about understanding your base line and from that base line it is about listening to the sailors. We brought Andy [Estcourt] up through the process. I believe he will bring a lot of that expertise to the Gladiator programme.

‘Then we have a really smart guy who has come out of South - ampton, Mário Trindade, who is a J/70 World Champion and very strong technically; it was us who also pushed for his dual coaching role.’ James Lyne will of course oversee each of the three teams

‘Our focus as a company is always to give the best possible support. We make sails and of course the “triangles” are important, but it is the data that is input to use them most effectively – where you are strong, where you are weak – that wins regattas.’

Reynolds continues, ‘We are in a unique position with the Quantum Racing team as we own all of our IP. Platoon really did not share very much information with other teams, even though we worked together. But they used everything we gave them… And that has been one of our promises to clients: that we will share every second of data from Quantum Racing that we can because we own it all!

‘We feel very confident. We have proof of concept. Tony Langley has encouraged the team to come back to Quantum because he says it was the best year he’s ever had, they had the best results, largely because of the process we had put together for them.

‘As a sailmaker I have to say sails are important but the most important thing is the documentation, the data that drives you to make good decisions on the race course and decisions on your set up. I am pretty sure that no one outside an America’s Cup programme has yet taken it to this level.’

Coaching and technical support have increased significantly over 10 years. Looking at it from a unique position is Sled’s evergreen Rod Davis, who has been in the coach boat for three of the series’s outstanding championship-winning TP52 teams, Emirates Team New Zealand, Azzurra and then in 2021 Sled.

Davis’s experience and respect are key. He is big on quiet observation and defining key priorities but he too notes how things have changed: ‘It has evolved each year so that there is more help and support for the sailors. When we started with Sled we had a rented chase boat loaded with sails and two of us on it, the boat captain and me... Now we own a big chase boat with all the race boat information coming to us all the time. Now there are four of us, driver, rigger, coach, performance analyst. We always bet… what time will we actually start? Which team will be fourth… Maybe we have a betting problem!

Below: The Super Series fleet lined up in Menorca last year looking every inch the premier grand prix class it continues to represent. In terms of inshore competition the sailing standard in the fleet and closeness of the racing are as good as it gets outside the America’s Cup. Development has levelled off, tweaks to sails and foils now being the norm rather than bigger changes. The boats themselves also remain fiercely competitive in their second lives in IRC and ORC events 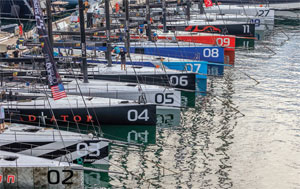 ‘My biggest focus is [team owner and helmsman] Mr Okura, helping him steer the boat better, crunch the numbers better and to adapt better across different conditions. That is my number one priority.

‘If Mr Okura is not there then I try to make sure the rest of the afterguard are all singing from the same playbook.

‘We will have Francesco Bruni again this year. The two of us have sailed together for 20 years, I have coached him and crewed with him and we get along really nicely. It is a nice mix.

‘Sled is a very easy team to try to coach because there are no egos and they are happy to work together and really share the information, each one putting their cards on the table.

‘My job is to make sure we come to conclusions and everybody has input. Collectively we have all the correct answers within this group, we have the experience and skills here, we just have to get them out.

‘My strengths are knowing what the high priorities are for winning regattas, what the most important things are that we need to execute and making sure that we get the most out of our players, both individually and as a team. I spend a lot of time setting up the right environment to get the best out of them.

‘I think a lot of coaches do what I would call overcoaching, too much data, too much information, and sometimes the sailors close down because there is such a bombardment of videos, pictures… and meetings! It is like an onion, you are trying to peel back the layers, not trying to add layers and make it more complicated!!

‘And the TP52s are a real point-and-shoot scenario. We get to the regatta and there are three days of practice and not a lot of development time. So we talk about development and, sure, it goes on in the background, but when we are at the regatta it is in the background. Now it is all about starting, boat positioning and sailing technique for all the different conditions.’
Andi Robertson