Push each other on 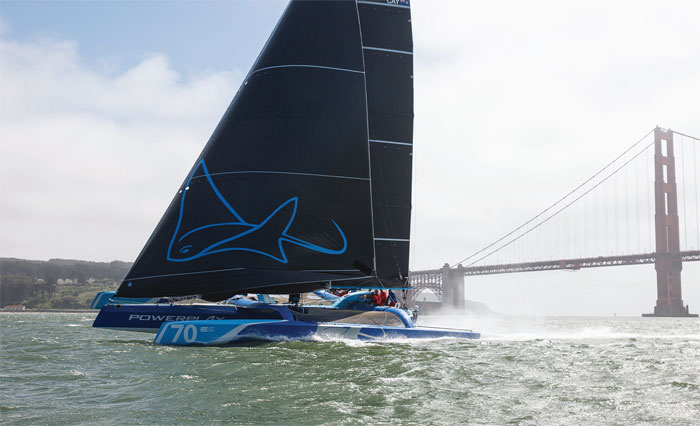 The MOD 70 trimaran class has history and form, plenty of both. In total, seven boats have been built, all are still sailing and some are still setting records. Peter Cunningham’s distinctive blue PowerPlay (formerly Concise), and now actively for sale as a turnkey package, is among those that continue to lead the charge, having recently set new records over the Fastnet racecourse and the classic Cowes to St Malo route.

But in a clear indication of just how competitive this unique fleet of oceangoing trimarans continues to be, it took little time for a sistership to up the ante. In the case of the Cowes-St Malo route, it was just minutes before Maserati had broken PowerPlay’s new record after the pair had set out on the same morning from the Solent in a cross-Channel duel.

Cunningham and his crew, led by longtime MOD70 skipper Ned Collier- Wakefield, set an extraordinary pace around the traditional Fastnet racecourse. A month later Maserati did the double and raised the bar even further, beating PowerPlay’s time by over an hour, completing the 605nm-course in a staggering 23 hours, 51 minutes and 16 seconds at an average speed of 24.94kts.

Main picture: the MOD70 PowerPlay recently broke two ocean racing records.
Below: PowerPlay’s owner Peter Cunningham is not giving up until he hits at least 40 knots on the helm 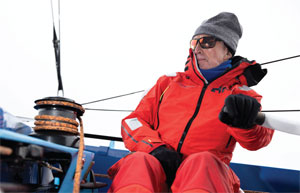 To have held an impressive record across an internationally famous offshore route for such a short period of time was doubtless frustrating for the PowerPlay crew, yet the ongoing rivalry is another reminder as to why the MOD70 continues to be an appealing and reliable inshore and offshore machine. Unlike other designs, the MOD70 hasn’t just kept pace with current developments, but in many cases has led the way.

The world of performance sailing has advanced rapidly over the last decade with speeds accelerating both inshore and offshore. The development of foil technology, driven initially by the big changes in the build-up to the 2013 America’s Cup in San Francisco, saw the 72ft foiling leviathans raise the racing above the water’s surface taking the top speeds with them. Then, the following season, the wing-masted AC45s were up on foils as the Cup looked ahead to another high-speed foiling event.

The technology triggered responses throughout the racing world with foiling finding its way into offshore racing aboard the Ultime class of 32m multihulls as well as the Imoca 60 monohulls. Everyone it seemed wanted to fly.

Meanwhile, the MOD70s appeared to be still operating in displacement mode yet in reality their C-section daggerboards had already been quietly providing foiling assistance, generating vertical lift that was not only increasing the power through additional righting moment but also helping to prevent the bows from burying at speed. While they may not have been seen primarily as foiling boats, the lessons learned aboard the MOD70s, especially in offshore conditions, were being fed back into the system helping to fuel the highspeed revolution.

The original concept of the MOD70 started back in 2009 as a one-design oceanic racer. The aim was to build a boat which would be the standard for the next 10 years. The development of the MOD70 was a collaboration between the VPLP design firm (Vincent Lauriot-Prévost and Marc Van Peteghem) and the Lausanne-based founding company Multi One Design S.A.

The original 10-year goal has clearly been achieved, albeit in a slightly different way as the one-design element has changed and various boats have been modified and tweaked. Yet despite the range of modifications that have taken place aboard some of these boats, the racing remains impressively close when MOD70s line up against each other. 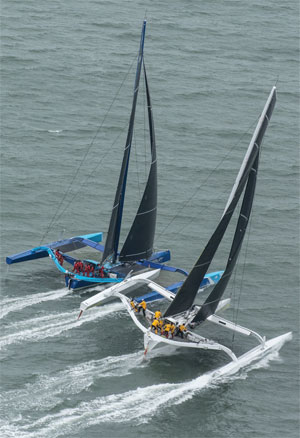 Above: The intense rivalry between PowerPlay and Argo has resulted in some thrillingly close racing.

So, what is it that has made these trimarans so enduring while also remaining so quick?

‘I think VPLP, got it right with the original design as they put more emphasis into building a stronger boat compared with the Orma days,’ says skipper Ned Collier-Wakefield. ‘These boats are bulletproof. We can push them hard and they just lap it up. You can set out on a record attempt and smash it across the Atlantic and you tie the boat up at the dock at the end of the day, wash it down and it's pretty much done.

‘Plus, I think they're pretty safe. You can push them really, really hard and yet they're still quick, amazingly quick. And while we’re all doing little upgrades, they’re generally pretty small ones aside from Maserati’s fully foiling package and even then, there are positives and negatives depending on what kind of racing you’re doing.’

Another interesting feature of the class is that unlike many other grand prix machines, especially ones that are capable of similar speeds, the MOD70s don’t require a large shoreside team to maintain them.

‘Martin Watts has run the boat since we took her on in 2015,’ continues Collier-Wakefield. ‘Essentially it's been him by himself, plus a couple of young guys helping him occasionally. But there’s not much to it. They're simple boats and don’t require much in the way of staffing. We deliver with five crew, race offshore with six or seven and inshore we might take a few more big guys to help on the handles,’

Watts is quick to confirm this while describing the maintenance of the big blue beast in even simpler terms. ‘I think of the MOD70 as a TP52 with some bits strapped to the sides,’ he says. ‘When you look at it, the winches are not huge and there's not masses to service. The winches are the main focus as we do push them pretty hard, especially with the modern high-performance ropes which mean that the loads are up to their maximum. We also service the hydraulics every six months. These rams allow us to cant the rig and so we do change them from time to time but apart from that the maintenance programme is the same as any other boat and simply about managing wear and tear.’ 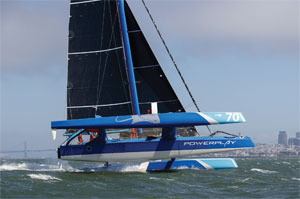 Above: in breezy conditions MOD70 crews sometimes lift the leeward daggerboard to control the angle of heel rather than playing the sheets or feathering the helm. When a gust hits, the whole boat can skip sideways

But behind the scenes, PowerPlay has something that sets her apart from her sisterships, and that is her owner. Peter Cunningham is a lifelong racer, having raced a wide variety of craft in a number of different locations around the world. But after he sold his business in California he decided that he wanted to take part in some offshore racing and started looking at the MOD70. There is nothing particularly unusual in that, other than he was already in his mid-seventies when he decided to buy PowerPlay. Now, having raced across the Atlantic, competed in the Middle Sea Race and many other events, he was on board for both of the most recent record-breaking runs around the Fastnet and to St Malo. A few weeks later he would celebrate his 80th birthday.

‘It’s a physical boat and you’ve got to be careful when you’re down below, especially at speed,’ he says. ‘Plus, there are some unusual motions especially in breezy conditions when you might lift the leeward daggerboard. This means that rather than heeling over when a gusts hits, you skip sideways which can catch you off guard. So, my rule is always having three points of contact!’

Having come from monohulls, albeit with some quick ones such as a TP52 and a J70, how had he found the experience?

‘It’s exciting, probably more exciting than I thought and at times it makes you afraid, but you do get used to it after a while and when you’re steering from 20ft above the water’s surface at speed it’s just magical.

‘Experiencing flat-out sailing for five or six days non-stop is pretty special too,’ he continues. ‘It’s pretty stressful on all of the crew and while this boat is actually very forgiving, it still highlights the need to really know what you’re doing at a level that is very different to monohull racing. That in itself is very rewarding as you learn a lot about yourself and the importance of how a team needs to work together at this level. Sometimes there are decisions to be made intuitively in a split second that involve everyone, teamwork is crucial, without it you can be in trouble.

‘Seeing this, understanding it and being a part of it has definitely benefitted my sailing in other areas, it helps you put things into perspective, understand how people deal with issues and has improved my manner on other boats. I have learned a great deal.

‘I treat my sailing as a project and after you’ve experienced something like this it’s difficult to think of what kind of project you could move onto, but I do still have at least one goal. ‘My top speed at the helm is 38.9kts, I want to hit 40 and I can’t sell her until I do.’