When two brothers changed everything 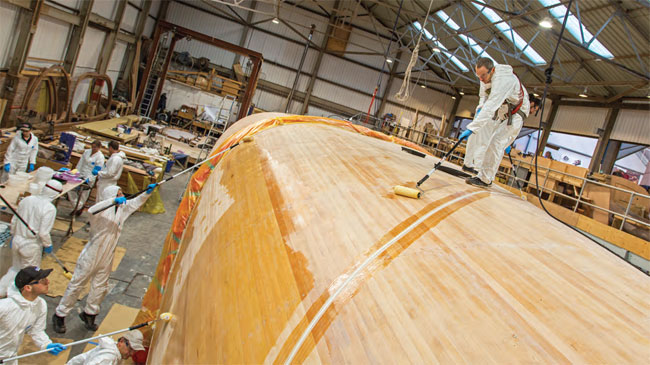 Faster, Higher, Tougher, Stronger is best known as the motto of Olympic achievement but it could equally apply to the spirit of innovation that the founding Gougeon brothers brought to the West System brand which endures more than half a century later. Dave Johnson, sales director of Wessex Resins and Adhesives, licensed manufacturers of West System products within Europe, has seen an explosion of that pioneering spirit over the past year. ‘It’s wonderful to see our products being used across such a diverse range of waterborne craft, from standup paddleboards to some of the AC75s in the recent America’s Cup.

‘We’re proud of the fact that we can trace the heritage of our products directly back to the Gougeon brothers in America, who back in the Sixties were the first people to start using epoxy for boatbuilding. These days, any Seahorse reader knows that building lighter, stronger, durable performance-optimised structures is definitely the way to go with any sailing boat where boatspeed = horsepower/weight, but it wasn’t so obvious back then.’

It was Meade Gougeon’s obsession with that formula that helped him become a multiple championship winner in the DN class iceboat. ‘Meade and his brothers looked at that small highly-stressed plywood one-design fuselage, and started using epoxy bonding and coating techniques that took the DN to a new level of performance,’ says Johnson. ‘It’s incredible to think that on the ice these small craft, even many decades ago, were matching or beating the performance of a modern AC75 on water. Both “runner” (skates) design and rig power/drag are prime design considerations with speeds of 40kts upwind and 65+ kts downwind. There are a surprising number of parallels, in terms of the pursuit of marginal gains in reducing surface and aero drag whilst increasing power to weight ratio with no loss of durability.’

Main picture: West System epoxy plays a crucial role in the construction process of many of the finest strip-planked modern classics, including the beautiful boats built by Spirit Yachts.
Below: at the other end of the spectrum, Pro-Set epoxy is used to build AC75s! 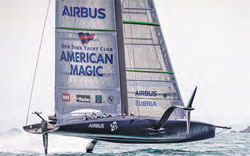 From those humble beginnings, West System has developed a range of battle-hardened, marine-proof products that work across the whole range of water craft, from wooden classics to the latest carbon composite extreme machines. ‘Here in the UK we see a number of people building dinghies and small race yachts in plywood. We see plenty of activity in the classic keelboat classes like the XODs, the Royal Burnham and Royal Corinthian One Designs, where our products are being used on numerous classic restoration projects.

‘At the other end of the speed range our product, Pro-Set epoxy, a sister brand to West System but for composite construction, is being used in projects where performance is the priority, where minimising weight and maximising strength is critical.’ One of the best examples of that is the Exocet, the International Moth design built by Simon Maguire, which has won most of the recent World Championships. ‘In the Worlds before last I think Simon’s boats occupied 19 of the top 22 places in the overall results. And all but one of every Exocet that has been built is still out there sailing. The only one that isn’t currently sailing is Simon’s own, which is hanging up in the ceiling of his workshop waiting to be finished!’

Additions to the current supply list include Ovington Boats in the north of England, builder of a wide range of epoxy composite dinghies and small keelboats including 49ers, Flying Fifteens, 505s and the Musto Skiff. Johnson recalls when Wessex supplied Ovington with Pro-Set laminating epoxy for building a run of more than 120 Mumm 30s, the iconic 30ft sports boat which these days is better known as the Farr 30. ‘Even more than a quarter of a century later most of these boats are still going as strong as ever,’ he says, ‘and some of them are doing extremely well on IRC handicap.’

With that heritage in mind, Johnson is particularly pleased to have earned the epoxy business at Ovington Boats. We strive hard to provide a technical advantage in terms of what we're prepared to do with testing and evaluation for any of our customers. Ovington Boats know that they will receive unparalleled technical support, whether it’s in providing advice on production related issues, or technical support on testing and development within our laboratory.

We’ve been doing this for 50 years but we’re never standing still. We're constantly evolving our epoxy formulations year by year, to make them safer to use and to explore anything that gives our products better physical qualities. We’re also making our epoxy easier to use, making sure that it's usable in a typical boat building workshop, which may not be a painted floor and a clean room type of environment.’ 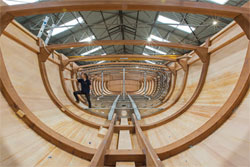 Above: West System epoxy is here used to laminate the timber hull frames and stringers inside this Spirit yacht. Even when working in a controlled environment, one of the major benefits of West System epoxy products is ease of use.
Below: back in the 1960s it was Meade Gougeon’s passion for competitive ice yachting that drove him and his brother Jan to develop the West System epoxies that revolutionised the way boats are built

For the explosion in “garage boatbuilding” during the past year of lockdown, Wessex Resins has seen a similar explosion in sales of West System epoxy. ‘It’s one of the only epoxies out there that will cure at low temperatures. So if you’re working in your shed at home, you would have supreme confidence in getting good results from our products.’

Ease of use is not just for the garage band though, it’s a relevant issue at every level of the sport. ‘Even in the America’s Cup you want something that’s relatively easy to work with. Even in a controlled environment you don’t want to be working with materials that are too fussy. Everything we create is designed to be usable in a boatbuilding scenario: the viscosities are perfect, the cure times are easy to achieve, the workshop conditions are relatively easy to achieve because you don’t need to generate high temperatures to get really, really good results.’

The qualities of West System and Pro-Set epoxy have caught the eye of manufacturers outside of the marine industry, such as in wind turbine production where the epoxy was used for development work and creating high-precision tooling. Increasingly Pro-Set epoxy is being adopted by parts of the high-performance motor racing industry as a viable and much more affordable alternative to some of the specialist epoxies that have dominated that market. I’d love to be able to tell you the name of the motor racing company we’re working with now but they were purchasing an aerospace-certificated epoxy that was costing five times more than something we could supply that had actually been used in the America's Cup. This was considered an unnecessary expense as the components they were manufacturing didn't fly.’ So they are now using the same Super Toughened product that was used n elements of the AC75s built by American Magic and Team Ineos UK for the America’s Cup at the start of the year.

If anything sums up the way West System and Pro-Set products serve the very top to the grassroots of the whole marine market, it’s probably best embodied in the Vampire foiling catamaran. ‘There’s a guy in Brightlingsea on the east coast of England called Graham Eeles who’s been building all the rudders for Spirit Yachts for the last five years. Graham has been working in conjunction with a couple of sailors - Will Sunnucks and Kyle Stoneham - on the Vampire foiling project. It’s an amazing machine, a converted 20ft two-person multihull that can foil quite happily at 28 to 30 kts. Graham had a few of the Ineos Team visit his workshop before they’d built any of their own prototypes. So I asked Graham, ‘Why didn’t you join the team!’ and Graham said, ‘Because I like doing my own thing.’ That’s what a lot of our customers are like, making incredible boats like the Vampire but getting on with it quietly, doing it because that’s simply what they love doing.’

West System and Pro-Set are proud to provide the products and the know-how to support passionate boatbuilders like Graham Eeles and many other magnificent men and women in their flying and floating machines. It’s a continuation of that “can do” pioneering spirit embodied by Jan and Meade Gougeon more than 50 years ago, and it’s exactly the legacy those innovative brothers would have wanted.