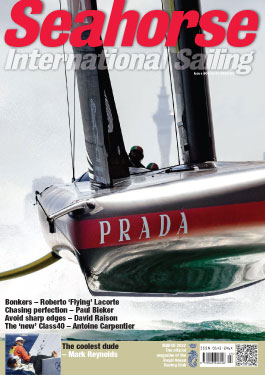 After the storm
BILLY BLACK

It’s the people (stupid)
Having filled the top six places at the last Moth Worlds it’s fair to call PAUL BIEKER’s first Moth design a success. But he did not get there alone

Leaving the world behind

Update
Don Corleone, Thomas Moy and the America’s Cup… so how come we never thought of that, BURLING and TUKE put down their weapons, Germany rising and an international boost for the Vendée Globe, all change but no change at SailGP. JACK GRIFFIN, BLUE ROBINSON, NATHAN OUTTERIDGE and JORG RIECHERS

World news
It’s onto the Generation 2 scows with SAM MANUARD and DAVID RAISON… but foils are a dead-end, a green Class40, a packed Rhum, LUKE BERRY gets his prize, FINOT-CONQ are back in the game, Kiwi bitch-fest continues, a bumpy ride down to Hobart and JOE HARRIS is officially our latest Captain Persistent. CARLOS PICH, PATRICE CARPENTIER, BLUE ROBINSON, IVOR WILKINS, DOBBS DAVIS

ORC – No broke no fix
Fingers crossed, it all seems to be going rather well! ANDY CLAUGHTON

Seahorse build table – No limits
This one will go the distance. PAOLO DINERO