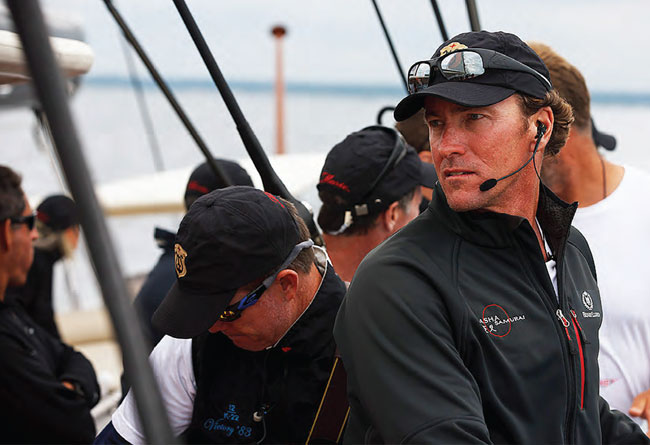 Doyle Sails’s high speed journey to the top of the sailmaking industry continues unabated. No wonder one of the most successful yachtsmen of the modern era renounced his agnostic stance to join them for the ride.

Doyle Sails has become a global leader in sailmaking by working with some of the most successful sailors in the industry. So when CEO Mike Sanderson was deciding what the next phase might be with Doyle Sails’ US presence, he called Tony Rey. For most of his career, Tony had been “agnostic” about sailmaking brands, but coaching and racing with Doyle programmes had impressed him with their sailors-first approach.

‘Owners decide what sails to buy. What they're actually buying is the people who are going to help them,’ Rey says. ‘I love that we're a small entrepreneurial company. Very much owner-operated, and all the partners have a little skin in the game.’ As a Rhode Island local, Newport made sense for him and Rey set up an office at Newport Shipyard just in time for the 2019 summer season.

‘It's the obvious place to be in the US for Grand Prix and Superyachts,’ Rey points out. ‘The sailing's great, you can jump off from a European crossing or from the Caribbean. And why wouldn't we start with an office at the Newport Shipyard? It’s where the big boats come in. We're taking care of Doyle boats that come to town — or any of the big yachts. Because as soon as you do a nice job with service, you’re part of that captain’s inner circle. It's all about building that trust.’

Early in 2020, three more Rhode Island natives came aboard as partners in Doyle Sails Newport: Rob MacMillan and his brother Dave, as well as Alex Clegg. ‘These guys all have a really solid handle on the local market,’ Rey says. (He’s “only” lived in Rhode Island since 1990.)

Main picture: Tony Rey is one of the worldʼs most talented and successful sailors. Since the start of 2019 heʼs been the head of the Doyle Sails Newport loft in Rhode Island, USA. Doyleʼs stellar success on the grand prix and superyacht racing circuits in recent years has been founded on a strategy of recruiting pro sailors of the highest calibre. Owners who choose Doyle are buying a lot more than just sails

Rob MacMillan, who’s been a Newport sailmaker for more decades than he cares to admit, says the Doyle opportunity came at the perfect time. ‘It's a group of people I really enjoy sailing and working with, and a really good fit locally. We’re not selling razors; buying sails is an emotional investment. People want to have security that they're buying whoever's working with them as well and that they’ll become part of their team. And that's what we've always tried to do.’

Local service and manufacturing
With an office at Newport Shipyard and a new 23,000 sq ft full-service loft five minutes from the harbour, the new partners are excited to offer real customer convenience. ‘Now we're five minutes away, which is great, because most captains are super hands-on.’ He smiles. ‘And we have a nice coffee machine.’ The ability to service large sails locally is a huge deal, MacMillan adds. ‘It's not an insignificant task to take a 500kg triangle off a boat.’

They can also build sails locally and the partners plan to hire 12 to 15 people to cover both service and production. ‘The Doyle Sails group is set up very well with interloft agreements so we can flex on the most efficient place to build,’ MacMillan says. ‘If the boat's here, we'll build it here. We've got more than enough floor space to do multiple projects at the same time.’ Owners and their representatives will be able to watch a sail being manufactured, which he believes leads to a better product. ‘Rey will probably be the first to admit that operating a sewing machine is not necessarily his forte, but he'll be able to oversee the sails for his projects being made,’ MacMillan says. ‘A lot of US production has shifted offshore. But you actually get cost efficiency building locally, because every boat’s a little bit different. And that little bit is what clients notice, that orientation towards detail. If you’re shipping sails all over, that gets lost’.

MacMillan still really enjoys sailmaking—even as he jokes that his knees are already hurting, just thinking about more hours crawling around the loft floor. ‘That's really satisfying; “We made that sail today”. And customers love that. It’s nice to be able to say, “let's meet for lunch and then we can go see your sail.”’

Doyle Newport: full circle
The Doyle name has been part of the Newport sailing scene since Robbie Doyle started his company in 1982. Rey says, ‘Robbie Doyle was with Courageous for two America's Cup wins and he is a big part of the sailing heritage here in Newport. Committing to a physical presence here is like finally closing the circle.’

Both Rey and MacMillan are impressed with how quickly Doyle has become a worldwide industry leader — because the technology continues to prove itself. ‘There are four superyachts in design/build phase now, all 150ft or bigger,’ Rey says. ‘And all four are going with Doyle. That’s because the naval architects, engineers, project managers and captains are all sold on our product. They're not going to buy disposable anything; it needs to last five-plus years and 100,000-plus miles of ocean sailing, which scales down to the rest of the market because the product has to be both robust and performance-oriented.’

It’s the people Doyle has hired who make that happen, Rey insists. ‘The team developing adhesives in our Stratis product, for example, it never stops. The engineering is ongoing. We’ve invested heavily in really, really good engineers, good designers — and good sailors.’

The Structured Luff and Cableless sails are a perfect example, he says. ‘When a sail hangs on a headstay it wants to fall to leeward. You need the shape, but you wish they would pull their own weight, so to speak. With the vertical lens of the structured luff, the sail itself supports a large part of the rig loads ‘It is no longer entirely parasitic. And it can work on almost any boat, dinghy to superyacht.’

‘Structured Luff technology isn’t just a small iteration in materials or design, Rey continues. ‘It's a big step forward. You're rethinking the way you do your rig tune. We’re rewriting how we engineer the structure of the boat itself, the rig and rigging.’

‘Everything!’ MacMillan agrees. ‘An 85-footer that was just launched is designed for a rig load of 22 tons. Thanks to Structured Luff technology, we can get it down to 16 tons— a huge percentage change—with less headstay sag. That's extraordinary. And the people behind this product are constantly trying to make it better. Personally, it's exciting to be with such a performance-focused group.’

Above: the Doyle Sails Newport HQ is in the iconic Newport Shipyard where many grand prix racers and superyachts are berthed. The loftʼs main manufacturing site is just five minutes away
Below: the Doyle Sails Newport team includes Rhode Island natives Alex Clegg, Rob MacMillan and Dave MacMillan, alongside Tony Rey. All four are partners in the new loft and regulars on the local sailing scene 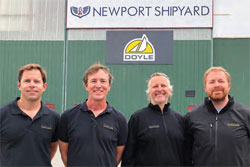 Helping the sport
All four Doyle Newport partners are regulars on the local sailing scene, where there is fleet racing almost every weeknight. MacMillan says that doesn't feel like working at all; ‘it’s just what I do on a Tuesday, Wednesday or Thursday.’ He’s excited to support a community that’s so into sailing. ‘Having the loft gives us the ability to say, “we actually make sails here. We're here and growing. We're in this all the way.”’

Rey is on US Sailing’s board of directors and a big part of his focus is getting more people excited about racing. ‘At Doyle we want to be a leader in those conversations: “How do we keep the costs down? How do we be part of the solution to grow our sport?” Which is another big reason why it's important to invest in a presence here, because this is where a lot of those conversations happen.’

Sailors first, salesmen second: that’s how the partners of Doyle’s Newport loft think of themselves, an ethos that is throughout the network. As Rey puts it, ‘my sailing arc has been a variety: inshore one-design, grand prix keelboats, superyachts. I’m able to provide value in different segments and I quite enjoy that. We’re bullish about our opportunities here and we are confident that our product is materially superior to what anybody else can do in Structured Luff and Cableless sails. Small sailmaker, big sailmaker, doesn't matter; we know we're ahead on product.

‘And we believe that good guys finish first,’ he continues. ‘Our partners in New Zealand continue to invest in the right people to support the Doyle group, continually making the product better and promoting it well in the racing and cruising arenas. It's not a get-rich-quick scheme, that’s for sure, but we can continue to do what we love and grow the sport. The end result is this great resurgence of the Doyle name internationally. And we're proud of that’.

‘We’re also proud of our sustainability efforts,’ MacMillan adds. ‘There are materials in sails that could have a second life and we’re working to make that part of our business strategy. I want my kids to be able to say that this company worked toward a sustainable future; that's really important to me and I know it's important to my partners. We can’t talk about it quite yet but it’s coming. And it’s really, really exciting to be starting something new.’