The biggest and the best 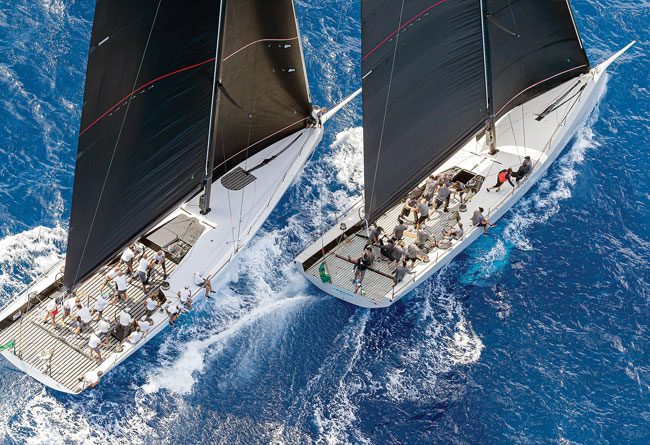 Just back from the biggest and best Maxi event in the world, the Maxi Yacht Rolex Cup, with many thoughts about how it could be made even better.

This was already a special year, it being the 40th anniversary of the International Maxi Association and the 30th edition of the Maxi Yacht Rolex Cup, held as usual in the idyllic waters of northeast Sardinia under the aegis of our longterm partners the Yacht Club Costa Smeralda and Rolex. We had a record entry of just over 50 Maxis to contend with and a very wide variety of beautiful yachts to try to organise into classes where the priority was their getting enjoyable boat-on-boat competition.

As I described in my last article, we have been working on better systems to correlate Maxi performance not by length or rating alone. This way class splits can be defined objectively avoiding undefinable subjective (aka contentious) factors such as ‘cruising potential’. So far our formula has been working reasonably well within the Mini Maxis (60-80ft LH); but more work needs to be done to devise a fairer system for the larger Maxis themselves.

With only three Supermaxis entered this year, we had to combine their start with the Maxi Racer Cruiser start and race both groups in IRC. At the superyacht level, however, ORCsy is working well and our aim for next year is to get the required minimum of four superyachts to come to Porto Cervo for a dedicated ORCsy class start.

We are frequently in a dilemma with class division, unable to please everyone, confusing to those in the know and probably completely impenetrable to everybody on the outside. In the early days the fleet was much more equivalent and it was easy to have one class and one world champion. The current spread in terms of both size and performance across the Maxi fleet makes it almost impossible to define an overall winner.

For example, in Porto Cervo we had numerous 60-footers, the minimum size required by International Maxi Association definitions to be a ‘Maxi’. At this size alone the yachts ranged from the highperformance DSS-equipped Wild Joe to classic heavy cruisers and modern racer-cruisers.

There was a competitive spread from the Swan 601s to the slowest and most vintage of this group, the 40-year-old Swan 65 Six Jaguar. At the opposite end of the spectrum were the two largest and ‘oldest’ boats, the J Class Velsheda and Topaz, while the Wally class included the two match-racing WallyCentos. 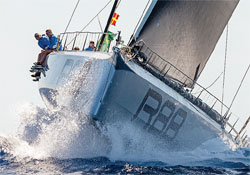 Main picture: the America’s Cup that never was as Cannonball does what she has to do at the start of the final race of this year’s Maxi worlds to lock out Jim Schwartz’s Vesper and secure the title. Post the 2007 event an America’s Cup in Maxi72-type yachts was one of the more serious options floated before all hell then broke loose in the courts. The new Bella Mente could only finish 3rd in Porto Cervo, but watch out in 12-months or so – Cannonball was nothing special (except to look at) when she appeared in 2017, such big boats take time. Juan K’s light 88-footer Rambler (above) continues to amass silver but fell short in Sardinia behind Irvine Laidlaw’s Reichel/Pugh 82 Highland Fling. An expensive line of carbon fibre and talent (below) as Cannonball leads in... again 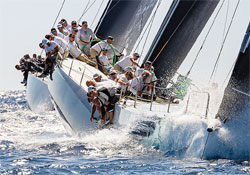 Then there were of course the pure grand prix racers, the Maxi72s, and what could be the beginnings of a new trend of racing Maxis in the 70-90ft range, led, as ever, by Rambler 88 but on this occasion with Highland Fling XI prevailing.

Given this huge diversity of ages, types and performance we will have to come up with some innovative ideas if we are ever once again to create one overall winner. But if they can find an overall winner in Cowes Week, where there are more classes with even greater disparity, then it is something for which we can still aim. For those watching from afar, for the media and for the sponsors, an overall winner would be most welcome.

This year we had eight classes and originally we had intended nine – had more modern classics entered. We still need class divisions to make the racing close and interesting and this year with many classes only being decided on the last day – and then having to use tie-breakers – we seem to have achieved our objective.

At the IMA dinner, held as always at the Yacht Club Costa Smeralda, two of our newly-introduced vintage silver perpetual challenge trophies were awarded. Our Yacht of the Year for 2018 went to Carlo Puri Negri’s Atalanta II. The 2018/19 IMA Mediterranean Maxi Offshore Challenge was a very close call between George David’s much garlanded Rambler 88 and Miguel Galuccio’s Vera. The latter just made it on tie-break, some consolation after having had to abandon their winning position on day 4 of the Porto Cervo championships when their rudder broke.

Our IMA Mediterranean Maxi Inshore Challenge still has one more event to run and the trophy will be awarded at Les Voiles de Saint-Tropez in October. I am looking forward to that event where the maxis will have their own separate race area round the corner off Pampelonne, supported by the IMA.

Our new ‘recruits’, the classic schooners of the International Schooner Association, will continue their series with Monaco Classic Week and then Les Voiles de Saint-Tropez. Next year there are plans for them to join the Spetses Classic Yacht Regatta (Greece) to help celebrate their 10th anniversary. A return to Porto Cervo in September is already being planned.

We are currently looking at a number of unique possibilities for next year. The J Class will join both the Antigua Superyacht Challenge and the St Barths Bucket next March. Most will then find their way to Auckland for a second IMA-endorsed World Championship in March 2021 to mesh with the next America’s Cup. It is hard to think of two more different types of boat but they will have sailed for the same trophy, separated by 90-odd years.

Potential new events in the calendar for next year include the 300th anniversary of the Royal Cork Yacht Club in July and a proposed new offshore race based on the model of the RORC Caribbean 600 but in June in the Aegean going around many of the Greek islands – the Aegean 600.

A new concept Maxi race is also proposed starting on the Sunday after the Maxi Yacht Rolex Cup which will depart from Porto Cervo and run for exactly 24 hours. The first yacht to Monaco, or the nearest at noon the next day, wins. This format aims to reduce the frequent problem of getting becalmed off Monte Carlo… as well as allowing the opportunity of a gala dinner for all competitors that evening in the Yacht Club de Monaco. Most important.

Back to our usual programme and we need to maintain or better accelerate the progress we have made this year with our core events. Our influence on consistency of notices of race, sailing instructions, race management and class splits has been designed to improve the quality of racing for Maxis. All our efforts are aimed at encouraging participation, since at present worldwide there is a worrying decrease in numbers in many forms of yacht racing – with the notable exception of the ‘big name’ offshore events.

The reasons are many, making it difficult to know how to reverse the wider trend. But given the turnout of Maxis in Porto Cervo we do seem to be slowly succeeding...