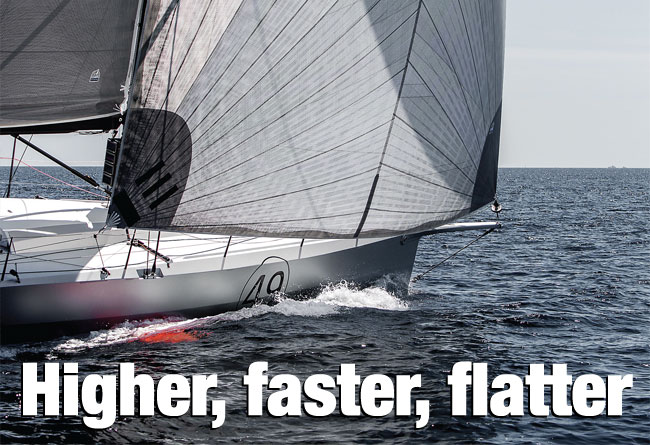 Deploying a lateral foil to leeward that generates lift and piles on righting moment when it is needed, as a single entity DSS represents one of the biggest performance enhancements you can make to a modern yacht. The point is finally coming home, having recently passed from fringe eccentricity to head-slapping ‘why didn’t we think of that years ago?’ 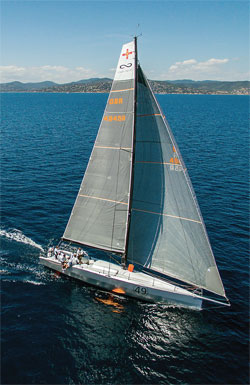 The first Infiniti 46R is now sailing in the Med with a full offshore programme ahead of it taking in all of the classic races. The first boat was built in Turkey but production boats will be supplied by McConaghy. With most of the big offshore races bar the Newport-Bermuda (ORR) now run under IRC James Dadd and his rule managers will be watching closely…

Following on from the DSS-equipped Infiniti 36 fast daysailer, the first Infiniti 46R has just completed sea trials in the south of France. The Infiniti 46R has been developed as an offshore/coastal race yacht for the classic 600-miler races such as the Sydney Hobart, Fastnet Race, Middle Sea Race and the Newport-Bermuda. Hull no1, Maverick, will debut shortly at the 2016 Giraglia. Designed by DSS creator Hugh Welbourn and engineered by Gurit, it is also built using Gurit carbon pre-preg with an M-Foam core.

In line with today’s market, the Infiniti 46R can be sailed relatively shorthanded with a crew of just six and is fitted with a canting keel (a fixed-keel option is also available). The keel is canted by a single Cariboni hydraulic ram while a single canard forward resists leeway.

Fitting DSS requires a reappraisal of where a yacht can get righting moment (RM). If a larger proportion of RM comes from the DSS foil, then a smaller bulb can be fitted and there is less requirement for form stability through large beam and full sections. This leads to considerable gains in all-round performance – the faster the DSS foil passes through the water the more stability it provides, while in light airs the foil retracts completely, leaving a light, easily driven hull.

The Infiniti 46R also features a chine running the length of the hull plus a pleasing hull-deck chamfer to reduce weight and windage.

In terms of rig and deck layout, the 46R has undergone an exhaustive refinement process and is equipped with light and simple solutions throughout. The mast is built in ultra-high modulus carbon by Axxon Composites with composite standing rigging and topmast backstays, all lashed to the rig in the style of the latest Imoca designs. Harken Grand Prix systems are fitted as standard, including a single Carbon Air pedestal.

Nice work if you can get it
– Stu Bannatyne
As a consultant for Doyle Sails I was asked to join the sea trials for the first Infiniti 46 in France. Having raced extensively on both Wild Oats and Rambler – which have tried a variety of DSS foils – I was interested to see how the system performed on a yacht designed around DSS foils as opposed to them being a retrofit.

Over a range of conditions the boat performed well overall with no obvious weak spots and at times it showed glimpses of exceptional performance. The foils certainly add a new dimension to the sailing experience and even the best crews will find that they have much to learn.

Aside from the additional performance which was a given from my experiences, the boat trimmed and balanced nicely; especially at high speeds and in rough conditions the foils clearly also helped smooth out the boat’s motion.

To get the best out of DSS you do have to rethink how you sail and understand how best to use the extra gears that the DSS gives you.

Certainly the speed potential, beyond what we have seen to date, is another step on from what this size of boat has hitherto represented. Exciting times.

A Cariboni hydraulic package drives the canting keel and other functions. All rams are in titanium, along with most of the fastenings as well as the propeller shaft (a retractable propulsion system is fitted as standard).

McConaghy Boats are building the Infiniti 46 and Infiniti 53, which is designed by Farr Yacht Design. McConaghy’s Mark Evans adds: ‘What I particularly like about DSS is that it is quite simple, because with complexity comes a bit of fear from clients.

‘And from a builder’s perspective, it is easy to put in the boat and to maintain. So given this, along with the performance gains, it is both a great thing to be offering and also a big opportunity for McConaghy. We believe that putting foils into boats will become quite common moving forwards.

‘We made all the new J-foils for the AC45F fleet here – the DSS foils are relatively straightforward in comparison.’

So what does this mean for the owner and what does the Infiniti 46R or Infiniti 53 deliver? Simply speaking, these designs are considerably quicker than a comparable offshore-capable monohull over today’s typical offshore/coastal courses.

The entire motion of the yacht changes with the DSS foil, with reduced pitching and heel angles of around 10° when high-speed reaching… The general sensation is of being on a larger yacht and a noticeably more stable platform.

Other key elements of DSS are the ability to reduce sail changes. Typically we see, particularly when reaching, that as the wind increases, so does the speed and righting moment, which means the yacht can carry the same sails even as the wind increases; so increased efficiency when racing, or indeed cruising.

Even in lighter airs, particularly when flying a code sail or gennaker into a mark, a late header which could have the crew scrabbling to hold a lane, can be dealt with by simply deploying the DSS foil. The boat might not be going fast enough for a performance benefit but the base stability from the foil can be enough to enable the header to be managed without a sail change, gaining valuable lengths.

The DSS foils in the Infiniti 46 and 53 effectively give the crew another set of gears to play with; trimming becomes ever more interesting as using the foil any speed gains the crew can extract from the yacht are rewarded exponentially by the increased efficiency of the foil; good trimming and driving mean much bigger gains than on a non foil-equipped boat. Sailing just got more interesting.

Can we win? We have worked closely with ORC and IRC and all Infiniti yachts are rated under both systems. Final ratings have yet to be confirmed but the boats will be competitive… and it has to be better to be fast and competitive than slow and competitive.

This is simply a smarter way to go sailing.