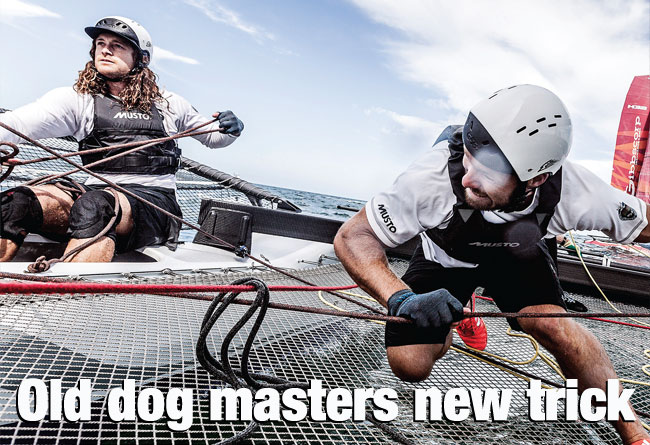 Switching from heavy monohulls to light M32 cats has so far done little (or nothing) to slow down six-time World Match Racing champion Ian Williams as ANDY RICE reveals...

Fremantle was the last place we ever witnessed the great 12-Metres racing for the America’s Cup. It’s almost 30 years since Dennis Conner wreaked his revenge on the Australians, seizing back the Auld Mug from the Aussie upstarts aboard his unstoppable blue boat, Stars&Stripes. The winged wonder that started the revolution down under, Australia II, resides in a museum not far from the water’s edge here. She would have been proud to see the Boxing Kangaroo emblazoned across one of the M32 catamarans shipped in for World Match Racing Tour Fremantle, the first event of this year’s Tour.

Some of the young home-grown talent had been training hard, aiming for a shot at competing on the Tour for the first time by taking part in one of the qualifying regattas during the build-up to the main event. For the likes of up-and-comers like Sam Gilmour (son of 12-Metre Peter), Matt Jerwood and Steve Thomas, this would be a rare opportunity to go up against the big guns – world champions such as Ian Williams and Taylor Canfield.

Just as Fremantle 1987 marked the end of the 12-Metre era, Fremantle 2016 would mark the start of a new era in the Tour, with the M32s replacing the keelboats that have been the traditional choice of the match-racing world. The aim is to realign the Tour more closely with the modern America’s Cup, both in terms of the boats and also the course configuration, which is now pretty much identical to the Cup, including the high-speed reaching starts.

With the new format, this season has been billed as a game-changer. That’s certainly what Canfield and US One have been banking on, having invested a full season’s racing on the M32 during 2015.

The young US Virgin Islander quickly rose to prominence in 2013 when he won the Tour at his first attempt, narrowly beating Ian Williams to the world title that year. However, Williams upped his game to win the next two seasons, making him a record-breaking six-time world champion. But surely not this year, in a new style of boat and a new format, in a compressed season that concludes in Sweden this July. Surely the old dog – well, 38 years old – couldn’t learn new cat tricks that quickly.

Certainly there were some names less familiar to the Tour hoping to take advantage of this game-changing moment, looking to apply their experience from other parts of the sport. Sally Barkow, for example, experienced match-racer though she is, has most recently been racing around the world aboard Team SCA in the Volvo race.

Yann Guichard who, when he arrived in Fremantle, was only a month back from his 47-day lap of the planet, his not-quitesuccessful assault on the Jules Verne Trophy but a triumph of high speed, longdistance navigation nevertheless.

As you’ll see if you watch YouTube replays of the racing, Fremantle proved to be fabulous spectator sport (as it did in 1987). Watching the M32 bear away at the top mark in big breeze is always a heart-in-mouth experience, no matter how many times you see it. The bow goes down, so far down, it’s hard to believe that a pitchpole isn’t coming next. But even when the breeze tipped over 25kt no one ever tipped over the handlebars.

However, there were capsizes, even for Guichard, one of the most experienced multihull sailors on the planet. You name it, he’s done it, in Olympic Tornados, AC45s, GC32s and of course most recently on the giant 140ft Spindrift 2 around the globe. It came while the Frenchman was jostling for position in the pre-start against one of the Aussie young guns, Murray Jones. ‘We were going really fast downwind, and I tried to gybe on the foil…’ smiled Guichard afterwards.

‘We capsized, but no damage, everyone was OK. Five minutes later we’re back upright and ready again. I’ve never seen this before on this size of boat. You always break something when you capsize…’

For someone with very little multihull background, Danish match-racer Nicolai Sehested was particularly impressive. Sehested was pulling involuntary wheelies on his M32 with the Boxing Kangaroo logo.

With both of the curved foils fully down, the Danish M32 would charge out of the water for a spectator-friendly ‘moment’ before crashing back into the water and charging forwards and on to the next wheelie. The leaping looked out of control, yet somehow the young Dane managed to get his kangaroo safely to the bottom of the course while others decided to sail more conventionally with just one foil down – not quite as fast but much more stable and predictable.

Sehested made no apologies for his fast and loose style. ‘I don’t think we hold back, we keep pushing, it’s the only way to learn how to sail these boats,’ he said.

‘Really I’m just trying to keep up with my crew, I don’t want to let them down by holding back.’ The Dane’s all-guns-blazing approach was good enough to see him comfortably past a stunned Taylor Canfield, who had come here with high hopes of victory. ‘You make some small mistakes and you pay big for them,’ shrugged an unusually downbeat US One skipper. 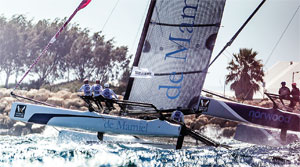 Match racing today is not quite the same as it was in the days of Dick Deaver and Bill Ficker and the early Congressional Cups. However, as a multihull tool, the choice of the M32 cat was inspired, the upwind una-rig allowing

fast manoeuvres while downwind the big A-Sail demands a whole new level of commitment. Star… of the show in Freo was 1996 silver medallist Hans Wallén (above) who was back in style

The vanquished Canfield went on to predict that his Viking victor would go all the way and win the whole darn shooting match. In his semi-final against Williams, Sehested did indeed look set to dispatch the reigning world champion with relative ease but succumbed to some unforced errors, not least a capsize while leading at the leeward gate. ‘I did a normal turn but I hadn’t noticed that our boards weren’t in the right position…’ said Sehested.

On the other side of the draw, Swedish wild-card entry Hans Wallén had sailed an incredible series. Wallén is an Olympic silver medallist in the Star, but that was 20 years ago, and the 55-year-old wasn’t expected to make it very far against all the young professionals. But for the final it turned out the 38-year-old Williams was a young gun again… and the young gun won, Williams beating Wallén 3-0.

Asked to reveal the secret to his success, well, even Williams was a little stunned to have done so well so soon. ‘But if there’s one thing I think I’ve always been good at, throughout my career, something I’ve been very focused on, is looking at ways of improving the different parts of what we do, always trying to learn and move things on.’

Williams was then asked how his team of day one in Fremantle, just five days earlier, would have performed in the final. ‘No chance. You can see how much the quality of the sailing has moved on with each day here. We’re so much better than we were, and of course we’re going to need to keep on improving throughout this year. We can’t afford to stand still.’

The World Match Racing Tour couldn’t afford to stand still either, and it hasn’t. Fremantle was a first glimpse into a brave new world. We’ve seen the future – and it works.