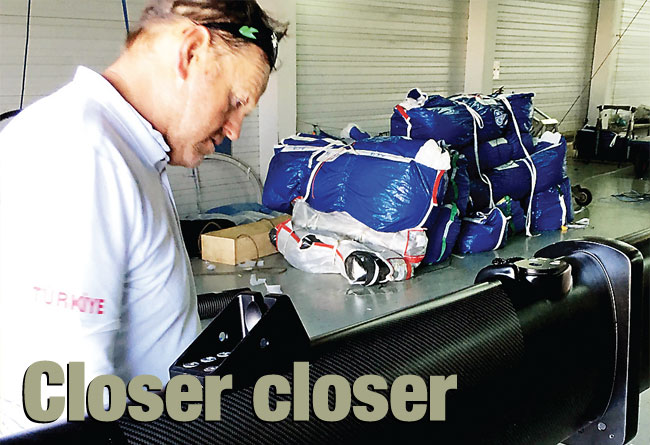 Rob Weiland says, Don’t be afraid to share to get ahead

Going through the 52 Super Series 2016 scheduling and entry list one might think that not much has changed from the spectacular 2015 series in which we saw nine new builds join the fleet. However, there are two new venues: Scarlino in Tuscany and Mahón in Menorca. Scarlino opens the series in May. The modern Marina di Scarlino provides ample space to get a fleet of this size and standard properly measured and prepared.

Scarlino is followed in late June by the testing conditions on the emerald coast of Porto Cervo. A fine combination of scenic but nerve-racking coastal races and a couple of windward-leeward days will decide the winner of the highly valued Settimana delle Bocche trophy. From Sardinia to the Bay of Palma and Puerto Portals in July provides another contrast in sailing conditions, requiring remoding to both your boat and to your tactician’s mindset.

This year we choose not to race during August as many of our officials and umpires are involved with the Olympics, but the TP52 worlds in September will see 12 TP52s battling it out in beautiful Mahón. One of the largest natural harbours in the world, Mahón has been claimed by many seafaring nations and has seen some epic sea battles. We hope to add one more, albeit more peaceful.

Finally, on 15 October we will know the identity of the 2016 52 Super Series champion… after five final days of racing on the challenging waters of Cascais and a total 45-odd races sailed with no discard allowed. No doubt another worthy winner.

One of 12 strong teams will share the experience this year, with Sorcha owner Peter Harrison and his sailing team directed by Campbell Field as the only newcomer in the fleet. They will join us at Porto Cervo and the TP52 worlds.

A few weeks ago five of our 2016 teams engaged in six days of sailing from the Valencia base of the St Petersburg Yacht Club, an initiative by the owner of Bronenosec, Vladimir Liubomirov. As can be expected after a full season of racing, I witnessed a different level of boat preparation than what we started with last year.

All five had used the long winter recess to evaluate and modify their boats. As a consequence it is equally as exciting to line up for the first time now as it was last year.

This year the TP52s for the first time in the history of the class race below seven tonnes displacement (6,950kg) but, as things go, the loads still go up by popular demand of the trimmers. Most rigs have consequently been beefed up by adding extra laminate to the outside of the tube. But as each team has different ideas on tube stiffness it surely was not the same mod for all.

Many have changed their standing rigging to fine-tune in this department in terms of both strength and drag. Provezza bit the bullet and the owner combined his wish to have a spare mast with a new rig incorporating significant changes in stiffness… as well as fibre optics laminated into the tube to record mast bend.

Retrieving quality data is the basis for proper performance evaluation, the only basis really. The majority of the Vrolijk-designed boats will sport new or re-profiled keel fins, some in combination with a new rudder. Rudders are moving forward as well, in search of higher modes upwind.

The majority of the Botín-designed boats are also on a new rudder track. Sails are never the same; I am not qualified to say anything sensible there. I just make sure we end up within the class limits with the right logos and sail numbers…

The human mind’s appetite for change is hard to contain. In combination with a lack of appetite for reading the rules, we sometimes end up on the wrong side of the fence. But once again I have Pablo Ferrer, now in his 11th year of measuring and checking TP52s. He has not seen it all, but more than most for sure.

So what did we see on the water in Valencia? Guillermo Parada, helmsman on Azzurra, noted, ‘All of the boats had improved and every day it is getting harder to gain a speed edge, so this season will be super-tight. Now it’s time to download all the data from this week and make the final choices about equipment and settings for the Super Series itself.’

Talking to Tony Langley and Tom Wilson, owner and manager of Gladiator, there was cautious optimism that with recent improvements the team have now found the legs to be on a par with the others; this was backed up by observations from the other teams. It hardly ever gets more detailed than ‘Gladiator is fast’ but they were not joking. With Mr Ian ‘Abu Dhabi’ Walker, double Olympic medallist, on tactics for the season I feel the orange-red hull shall be visible in quite a few photos of the leading pack. Once they’re confident and up to speed the next goal is consistency, maybe even harder to achieve.

Simon Fry, trimmer on the Vrolijk-designed Provezza, confirmed their search for more improvements upwind and the trade-off that demands: ‘In general now we can live in skinnier [tighter, higher] lanes upwind than we could before and I don’t think we have given away much downwind… So it’s hopeful.’

Amazingly, it is the fifth year already since the demise of the MedCup. Time flies. Also in 2016 the Super Series fleet will be predominantly owner-driver and the outlook for 2017 is no different. Teams joining (like Interlodge) or showing interest in joining in 2017 are so far all owner-driver.

If there ever was any overlap with pro-driver commercial sailing events like the AC, Extreme Sailing Series or the Volvo in the MedCup days, whether in reality or in ambition, I feel this is no longer the case. This is important as it will produce a clearer picture, a clearer product, whether one is looking to join, to enjoy, to work, to support, to sponsor, to watch or to follow online.

As for the boats, they suit that model perfectly. Cutting-edge technology, fast and sometimes even furious without getting into the extreme sport arena, certainly not one-trick ponies and well sought-after secondhand all over the world.

The space for evolution has narrowed after the large steps taken between 2011 and 2014, at least without a major rewrite of the TP52 Rule. Right now present and interested future owners all appreciate and expect rule stability. They will get just that till they indicate otherwise.

With class president Niklas Zennström back on the tiller of Rán Racing for the full series after a semi-sabbatical from racing in 2015, the 52 Super Series and the TP52 Class are ready for 2016. We wish all sailors, wherever their competition takes them, good times, nice winds… and fair competition.