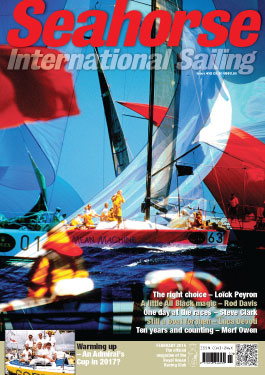 A driver of innovation
Maritime chess... JOHN ROUSMANIERE looks ahead to the 50th Anniversary Bermuda Race

Kite strings
It will soon be 10 years since we first experienced the ‘boosted’ string-drop. MARK WISS

Shock and awe – Part 2
A day at the races... that was pretty much all of the on the water action for STEVE CLARK at the Little Cup. But there were compensations...

A sport of idiosyncracies –Part 2
Who would have guessed that foiling superstar BORA GULARI is also a very handy guy to have along when you go Scow racing. DOBBS DAVIS

Best of both worlds
JESPER BANK keeps his focus upon usage

Busy guy
One man continues to fight to bring the different offshore cultures together... ROB WEILAND talks with a hyperactive ANDREW MCIRVINE

Closing the gap
How well does CFD simulation really stack up against high quality empirical testing? JIM TEETERS and DOBBS DAVIS try to find out

Shine a light
Will solar power taken from your sails get you around the world? ALAIN JANET believes so

Welcome to M32 World
Why one small corner of Sweden will never be quite the same again. ANDY RICE