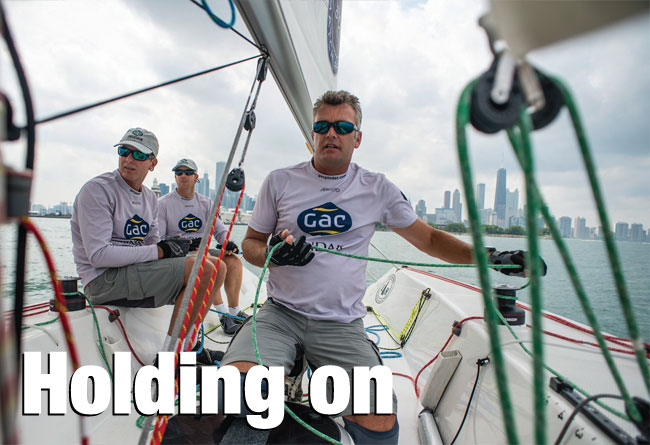 Why the latest Dyneema® products are better than ever...

Dyneema® is a HMPE (High Modulus Polyethylene), also known as UHMWPE or Ultra High Molecular Weight Polyethylene and is available in a number of different grades. All grades of Dyneema® have excellent fatigue resistance (cyclic bending) and UV, chemical and abrasion resistance, but all have poor heat resistance due to a relatively low melting point (150°C).

Dyneema® offers the best strength-to-weight ratio of any material used in rope manufacture, rivalled only by PBO, and is now the material of choice for high-performance cores. Marlow offer a range of Dyneema® cores to suit application preferences as well as budget. However, with new grades of Dyneema® being introduced and different treatments available, the decision as to which core is best can often be confusing. 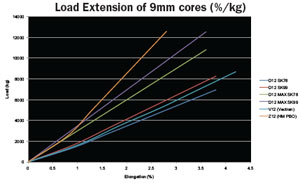 Another area of confusion can be heat-setting and prestretching. Every Marlow D12 Dyneema® core is pre-stretched to reduce ‘bedding-in’ elongation, limit the amount of elastic elongation and improve rope strength. Pre-stretching involves the application of heat during the process and is sometimes known as heat-setting, although simply applying heat does not have the same effect. Marlow have now been pre-stretching Dyneema® cores for over 25 years and that experience means we know exactly how to improve a rope’s performance without compromising flexibility or damaging the fibre.

Marlow’s MAX Technology takes pre-stretching to a new level by using a precisely controlled process to take Dyneema® to the limits of heat and load during the Pre- Stretching process – it could be called ‘Super Pre-Stretching’. D12 MAX ropes were introduced to offer the ultimate in strength realisation from Dyneema® and to virtually eliminate elastic and ‘bedding-in’ elongation. 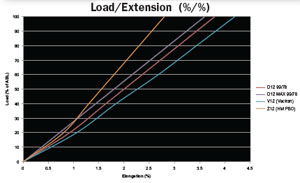 The graphs (opposite) show the relative elongation of Dyneema® SK78 and SK99 to Vectran and Zylon.

When elongation is measured as a % of break load (Fig. 2, middle), it is shown that while PBO offers the lowest elongation followed by Dyneema® in D12 MAX and then D12, there is no differential between SK78 and SK99.

However, when elongation is measured at a given load (for example, 4,000kg), which is more relevant to specifying rope for onboard applications (Fig. 1, top), the advantages of SK99 over SK78 in terms of elongation are clear. This is because the rope is working at a lower percentage of its break load. 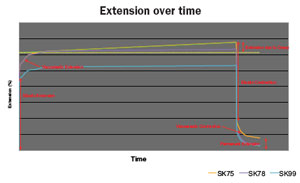 Dyneema® exhibits creep, and it is important to understand how this affects a rope’s elongation characteristics. Creep can often have a negative effect on a rope’s performance and strength, when ropes are subjected to high loads for extended periods. The extension over time graph (Fig. 3, bottom) shows how Dyneema® ropes behave over a period of time.