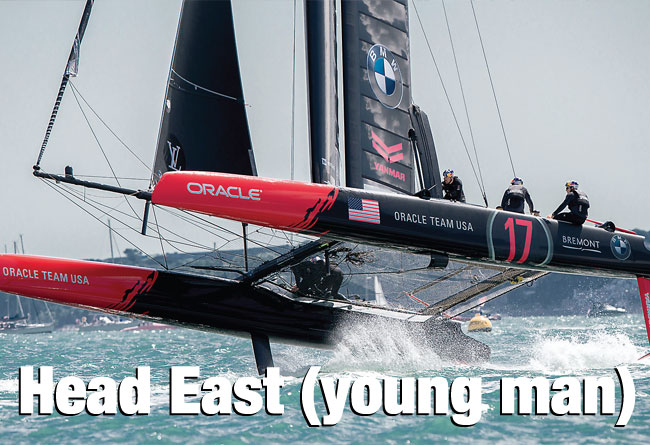 A return to Sanya… and with plenty to discuss

The 2015 ISAF annual conference will take place in Sanya, China from 6 to 14 November where we will be joined by our MNAs, class associations, sailors, event organisers, boat manufacturers and many others. Sanya expects to receive more than 500 delegates.

Submissions
Over 200 submissions have been sent by numerous committees, MNAs and class associations proposing changes to existing policies or rules, as well as looking to introduce new ones. All submissions and topics will be discussed at committee, sub-committee and commission meetings.

The Equipment Rules of Sailing (ERS)
This is the rulebook of equipment definitions commonly used in sailing and is updated every four years. This is the last year that modifications can be made before the 2017-2020 version is published. There are a number of submissions to the ISAF conference that include additional definitions for offshore sailing and yacht rating systems. Also there are new definitions for equipment that is commonly used in kiteboarding. If the submissions are passed by ISAF council in November they will generally widen the scope of use for the ISAF Equipment Rules of Sailing.

The Racing Rules of Sailing (RRS)
At conference ISAF will consider a large number of proposals to amend the Racing Rules of Sailing for 2017-2020. This is the last opportunity to put forward proposals for the next book, with the final text available from July 2016. Proposals being considered include the simplification of rules for rounding marks, standardising the use of discretionary penalties (rather than automatic disqualifications) and important proposals to widen the scope of rule 69 to include support persons… and parents. ISAF will also consider a large number of proposals affecting the specialist disciplines of windsurfing, kiteboarding, match and team racing.

Top: 2014 Rolex World Sailor of the Year Jimmy Spithill (AUS) and Oracle crew press buttons wildly as they try to keep the team’s AC45F flying fast and level during the first Louis Vuitton AC World Series round in the UK. Ben Ainslie Racing won this first event, with only two races held due to the British weather…

Training and development seminar
This seminar welcomes delegates from MNAs who wish to focus on increasing participation and performance sailing. The seminar has previously featured guest speakers including Connect to Sailing Partners, plus presentations on key subjects including women in sport, the Sail Africa project, regional development programmes and potential links between schools and sailing venues. We encourage interactive discussion between MNAs and ISAF and welcome questions and suggestions in a bid to encourage the growth of sailing worldwide.

MNA forum
ISAF is enhancing this year’s MNA forum and is providing a platform where key personalities from the sport will present on a variety of subjects; for example, the ISAF Emerging Nations Programme, Evolution of Sailing, Paralympic Sailing. This will be followed by an opportunity for our MNAs to meet various stakeholders within the ISAF family and learn more about regional games, training and development as well as the Sailing World Cup.

ISAF Rolex World Sailor of the Year
ISAF Rolex World Sailor of the Year is the highest award a sailor can receive off the water, in recognition of outstanding sailing achievement… and voted on by their peers. Two awards are presented each year, the most outstanding female sailor or crew and the most outstanding male sailor or crew. Past winners have been drawn from most of the many diverse disciplines within the sport.

The 2015 awards presentation will be attended by the best sailors, regatta organisers and other eminent guests, while this year’s awards will see the introduction of live voting on the night to decide the final winners. This year also marks Rolex’s 15th year as title sponsor and one again the winners will also receive a prestigious Rolex timepiece.

Induction to the ISAF Hall of Fame
Sailing has a long history of men and women who over the years have made our sport what it is today. They push boundaries, achieve incredible feats, show passion and resilience and above all share a desire to succeed and move the sport forward. The Hall of Fame is an opportunity for the International Sailing Federation to recognise those who have made a particularly significant impact on our sport and there will be a further inauguration in Sanya…