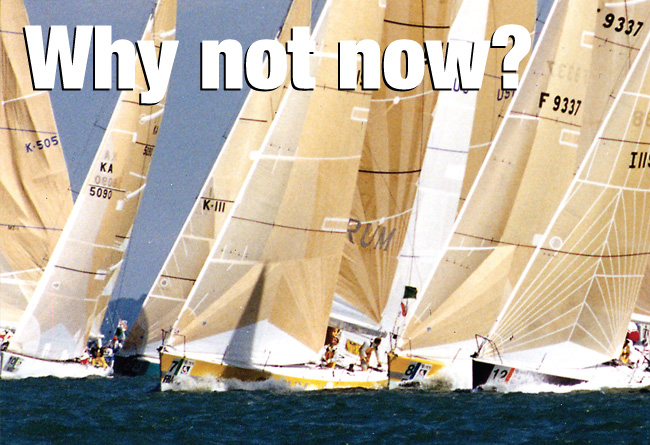 Christmas is the time for reflecting and dreaming and here comes the editor of this fine magazine asking me to consider some words on how to revive the Admiral’s Cup. He knows that from a young age I have never dreamt beyond that trophy. Finally, in 1999, there was the moment when I could hold the Admiral’s Cup as a member of the victorious Dutch team. The whole episode got me close to a burn-out, but now 15 years later the good memories have won as well.

It was a memorable moment. As with the America’s Cup and its defender, the Admiral’s Cup was set up to give the home team a bit of an advantage. Racing in home waters and having so many rules and requirements that bringing at least one rules specialist was never a luxury.

The biggest variation through time was in the choice of boats, mainly driven by availability. The traditional Admiral’s Cup had three main complications: a) team event, b) very long event (nearly two weeks of racing including entry and lay days) and c) unique but not that great location, certainly not for marina and parking faci lities, housing and logistics. Never mind the weather.

To cut my ponderings short I wrote a possible introduction of the 2017 Admiral’s Cup Notice of Race: ‘The Admiral’s Cup from 2017 is a three-boat national team event based on a mix of windward-leeward (WL) and coastal or offshore races, to be raced every two years within a maximum of seven consecutive racing days in a location decided by the RORC within the geographic area chosen by the previous winning team from a shortlist (that might be adapted over time). The boat selection will be made by the RORC, principally for a minimum number of two events, after consultation with the teams competing in the previous event and with class, level rating or rating rule representatives.