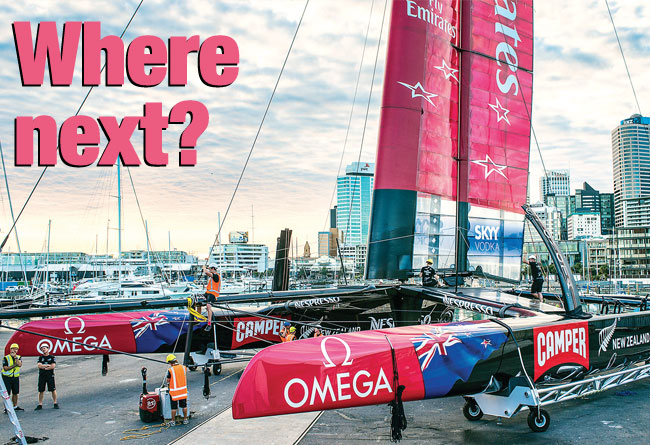 We shouldn’t speculate on the next America’s Cup class… Oh, why not? (By Rod Davis)

Depending on who you ask, and their vested interest, the America’s Cup has never been in better shape or is heading for a train wreck. The truth, as usually happens, is stuck somewhere in between the two. In fact, the America’s Cup as an event has been both – in a better state and in a worse state – and all within the past 10 years!

So how did we end up here? By way of a little refresher, let’s flick back the calendar for a moment, to 2007 when the America’s Cup was successfully defended by Alinghi in the closest contest in 30 years. That same afternoon the Alinghi lawyers proceeded to set up the conditions for the next Cup with their chosen Challenger of Record, frequently referred to as Puppet of Record.

Unfortunately their nominated challenging club wasn’t a yacht club at all and so was invalid under the America’s Cup Deed of Gift. Oracle seized on this and submitted a ‘hostile challenge’, relying upon the Deed of Gift which demands the Cup winner acknowledges and accepts the first challenge received from a yacht club… that would be from Uncle Larry and Sir Russell. The law courts went with Oracle’s position. How Alinghi could have messed up on this very basic requirement astonishes me to this very day.

And so the fight went on, back and forth in the courts for years until they finally ordered the races to be sailed in Valencia – both sides dropping serious coin in legal fees along the way. Everybody knows that on the water Oracle won, after which and in spite of what was said leading up to the event about ‘achieving consensus’, Ellison and Coutts immediately set about implementing their personal new vision for the America’s Cup, some might say hallucination. Their sights were set on television and the Facebook generation. Out with the old, in with the new to attract a new and bigger fan base for racing sailboats.