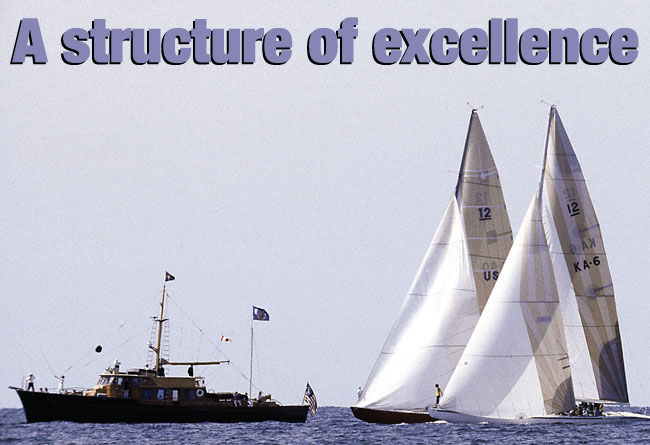 A timely moment for Blue Robinson to speak to 1983 America’s Cup winner John Bertrand about Newport 30 years ago, the pressure and the smell of gunpowder…

I n 1983, with excellence running throughout his entire organisation, John Bertrand knew he would have to travel to Rhode Island to give his crew a chance to lift the America’s Cup. In 2005, after a poor showing in Athens, Bertrand was involved in establishing this same philosophy among the Australian Sailing Team. A year on from London 2012 and Bertrand has just been appointed President of Swimming Australia – tasked with delivering these principles to another underperforming Olympic sport.

Seahorse: Leading up to the 1983 America’s Cup you made it clear to Alan Bond and Ben Lexcen you were simply looking for a fast conventional 12 Metre to race in Rhode Island.

John Bertrand: I didn’t want to go extreme. We’d gone there before with Southern Cross with some radical ideas in terms of length and underwater shape and that made for a long summer in Newport…

SH: How long did it take to convince you that Australia II was worth pursuing?

JB: I first saw the design in the ship basin in Holland but the computer printouts, which were very crude in those days, suggested we were going to be 15-20 minutes faster around the track! I was back in Melbourne when the crew first sailed Australia II in Fremantle and I got a call from John ‘Chink’ Longley who said, ‘We’ve got a problem, we’re just slow…’

I flew to Fremantle and we sailed the boat against Challenge 12 in perfect conditions, 10-12kt of breeze. Upwind we stayed locked together for about 10km then both peeled off downwind and Challenge 12 with its conventional keel just sailed away from us… We got annihilated! It took us quite a long time to develop the right sails around our boat with its lower centre of gravity – one consequence being the smaller spinnakers we developed. But actually right through the Louis Vuitton series in Newport square running remained our weak point.