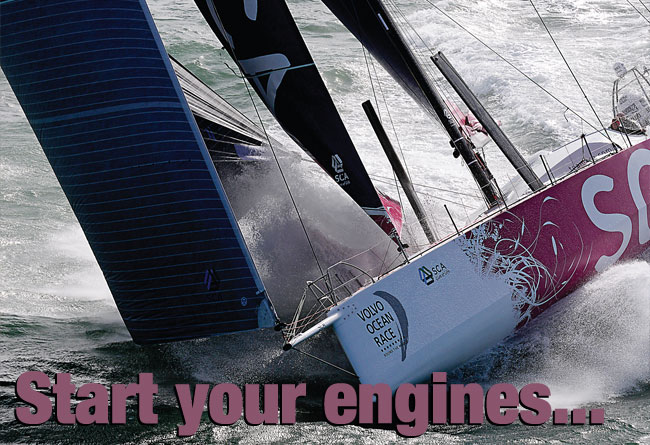 SCA – the ‘women’s boat’ for the next Volvo Ocean Race – was resplendent in her pink livery at the dock in Ocean Village, the first of the one-design 65-footers to be launched (although officially number two from the builders). She was an inviting prospect for a sail on a mild October morning, but one could have wished for rather more wind – it’s an old cry: ‘You should have been here Friday’ when the breeze was up and photographer Rick Tomlinson had a field day (above).

Comparisons are odious but 40 years ago the first Whitbread Round the World Race was won by a very different 65-footer, the Swan 65 Sayula II, which had suffered a capsize in the Southern Ocean and still won that second leg into Sydney on corrected time. The Volvo Ocean 65, externally, looked capable of being able to repeat that performance, but with less possibility of its occurrence!

The idea of a one-design for the race had been long in the mind of Knut Frostad, the CEO of the Volvo Ocean Race, a man with his own experience of skippering a pink boat, Djuice, in an earlier edition. That had been a 60-footer designed and built to a restricted rule, but in his current role Knut began thoughts of a one-design in 2008.

These, however, he didn’t progress, but by the start of the last race, in 2011, they had begun to take shape in his mind.

At this time, according to James Dadd, the class project manager, Knut was approached by several groups including a consortium syndicate of Green Marine, Multiplast, Persico and Décision SA, along with Farr Yacht Design, concerning the idea. It was really this group’s work and their constant pushing, plus providing a sound proposal, that made the idea viable. There had been concerns that one yard doing all the work was not the best solution, but with the consortium there would be the capacity to get a fleet built in the short timescale that was needed.

It was when the last race was at the Miami stopover, in May 2012, that the final decision was made to go ahead with the project and, 17 months later, one boat was in the water, preparing to head to her training base in Lanzarote; another was being painted and a third was weighed during the second week of October. The fourth boat was having its systems installed and number five had arrived at Green Marine for finishing, while the sixth boat’s deck was at Multiplast and the hull was out of the mould at Persico. The rest will follow.

There are tremendous advantages in having a one-design class for this event, particularly for the competitors. In the past it was important to get a team up and running at an early stage so that they could get their funding in place and the boat designed and built. Teams do not have to do all that now – they can start much later, which saves a lot of money. But it also means that they are effectively relying on Volvo for more of the interim funding prior to actual purchase. Then there are the prolific cost savings that are being made possible for the next event through collective, race-supplied shore services.

The Volvo Ocean 65 itself is very obviously a derivative of the 70-footer used in the previous race, except that this time around all the boats will be precisely the same shape and weight. One of the main obvious differences is that the chine now continues the whole way forward, right the way to the bow, but also the bow is very different – largely resembling the bluff bow of the Abu Dhabi boat in the last race. However, by taking that wider profile at deck level and then pulling out the ‘chin’ the overall impression is much more elegant.

The result is more freeboard in the middle of the boat, a slight reverse sheer and ultimately a slightly lighter boat than the 70s. The new class is, in fact, around 1.5 tonnes lighter than a Volvo 70, scaling in at 12.5 tonnes.

Bearing in mind that the producers of the Volvo Ocean 65 were aware that the boats were likely to be sailed like ‘rental cars’ and did not want the damage issues that had occurred with the 70s, there is close to 800kg more carbon-fibre in the boat than in its immediate predecessors. The designers had also learnt from the last race that there were likely to be structural issues from hitting solid objects in the sea and that these issues were unavoidable, so the structure is beefed up accordingly.

Immediately apparent is the small angle of cant of the daggerboards – they angle inwards at the deck – and the reason for this is simple and logical. The Volvo office wanted to make sure that the boards could be lifted using the rig, in an effort to keep complexity under control.

Having lifting towers for the daggerboards is both costly and complex while lifting from the rig keeps both these factors under control. Their position and cant angle are dictated by that. The ease of operation on the test sail bore testament to the foil mechanism’s straightforward design and engineering.

Also eye-catching is the large coachroof. In the past teams have eschewed the luxury of greater protection from the elements – shades of Paul Cayard complaining about the ‘firehosing’ of the bow wave – because of a possible cost to performance from the added windage. But with a one-design comes the opportunity to provide the added protection to the crew.

Behind the coachroof are the sailing systems – the pit area – where everything but the sheets are trimmed in the one location. Batteries of roller fairleads and lever jamb-cleats are in profusion and every line is colour-coded. There is one central winch and the system is ergonomically well thought out, as are all the other systems onboard that allow the majority of the crew work to be accomplished from safely within the cockpit.

My immediate reaction was that the rig was on the conservative side – the mainsail is 146sqm compared to that of a Volvo 70, which was 175; however, the boat is lighter and much more easily driven. The jibs are also considerably smaller – for the Volvo Ocean 65 the LP is 9.2m (non-overlapping) against the 70’s 13m. The A3 is 400sqm (its clew comes aft as far as the clew of the mainsail on the boom), compared to 500sqm on the bigger boat.

All headsails, with the exception of the J1, are on furlers. The J1 is hanked on the forestay, and a great deal of discussion went into this decision. As these raceboats are fully crewed, there is no reason why it has to be left hoisted when not in use, like those of an Open 60.

The rig is by Southern Spars and is well tried and tested – it is standard in its approach and the design team have avoided anything that might go wrong. One thing that is noteworthy is that since it is intended that these boats should do two races, there is a 70,000nm warranty on them and the masts and a 35,000-mile warranty on the standing rigging – sounds bomb-proof! The premise being that teams might either want to do a second race or sell on their boat for another team to race.

One cannot but hope that the onedesign ethos is being preserved in the building, and enquiries revealed that the boats produced so far are extremely close. The chief measurer, James Dadd, said that after checking the first three boats with a laser, the biggest variation was 1mm, and he added that he was ‘not 100 per cent happy with the laser on that one’. When weighing the third boat he found it was 6.5kg lighter than number two. The empty weight of the new boat is approximately 12,500kg – the difference is in the order of 0.05%. All boats will be corrector weighted to the same figure.

The same is true for the spars. Each mast is corrected to the same weight and centre of gravity. The canting keels (40° either side of vertical) are all balanced to the same weight and the object has been to produce the closest possible one-design fleet. Dadd pointed out that the weight range to which they were working was tighter than that for the RC44, a boat of around a quarter of the all-up weight of the Volvo Ocean 65.

The introduction of the Volvo Ocean 65 should have turned the race into a much more commercial event than ever before. Bringing in a one-design boat, with its lower cost commitment, should obviously attract more companies to enter the race. In addition, the leg finishes should be closer than in any other previous race, and so guaranteed to attract greater media attention. Boats of the Volvo Ocean 65 class appear to have everything going for them.