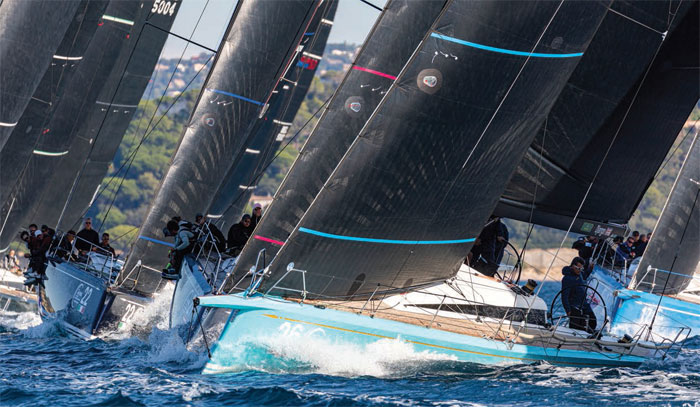 A beautiful fleet of fast modern offshore one designs, a glorious venue, close racing and one of the friendliest groups of competitive sailors you will find anywhere... Oh yes, and the weather was good too

Gifted amateurs rub shoulders with some of the biggest names in sailing on the ClubSwan circuit, creating a uniquely sporting atmosphere. And what better venue to stage the grand finale of the ClubSwan 2021 racing year than the stunning Mediterranean town of St Tropez, on the French Riviera.

A record turnout of 41 yachts from 18 different nations assembled for this year’s Swan One Design Worlds, from 13 to 17 October. The fleet comprised 10 ClubSwan36s, seven CS42s, eight Swan 45s and 16 ClubSwan 50s.

The lure of being crowned World Champion in St Tropez drew several new boats into the fleet, including the CS50, Django. Well-known on the IRC/ORC circuit, owner Giovanni Lombardi was keen to have a go at the big prize. Looking to defend their 2020 titles were Marcus Brennecke’s CS50 Hatari, Lennard van Oeveren’s 45 Motions, and Andrea Lacorte’s CS36 Vitamina. There were also three new entrants in the Swan 45 class, Ex Officio, From Now On and Blue Sky.

Main picture: the Swan One Design World Championships were blessed with a high turnout of talented crews, fierce but friendly competition in all four classes and a wide range of weather conditions that tested the teams’ tactical skills as well as their boathandling prowess

After four successful events already this year the top boats were: G-Spot, the CS36 sailed by Giangiacomo Serena di Lapigio; Natalia Brailoiu’s CS42 Natalia; Stefano Masi’s Swan 45 Ulika; and Brennecke’s CS50 Hatari. Nautor Group Chairman Leonardo Ferragamo, who sails the ClubSwan 50 Cuordileone, spoke emotionally about bringing the Swan One Design Worlds to St Tropez. ‘Sometimes it is very exciting when you reach your dreams. But when you reach dreams that were not in your mind, that means you have gone beyond the dreams.’

Day 1 - light airs delay start
Unfortunately, light airs limited the first day’s sailing to just one race. Although the tension as the crews prepared was palpable, with just the slightest breath of a SE breeze over the gulf, a delay was inevitable. Being the final event of the season, and a World Championship to boot, teams were still tinkering with their setups right up to the last minute.

Finally, at 1330 the yachts streamed out to begin pacing the start line. With their powerful sail plans and relatively light displacement all the Swan onedesign classes can sail in winds from a mere five knots, although it makes for some tricky, technical sailing.

In the CS36 class the helmsman of ThirtySix, Edoardo Ferragamo summed it up, ‘You have to be very patient when the wind is unstable. Maybe some moment you have a strong gust, then five minutes later no wind at all.’ The winning CS36 was Giangiacomo Serena di Lapigio’s G-Spot, closely followed by the Loro Piana brothers’ yacht Sease. ‘The race was tough because of the wind switching a lot,’ said Franco Loro Piana. ‘It was all about following the big shifts and chasing for pressure.’

In the CS42 class, Natalia crossed the line first after winning the start. ‘It was tricky deciding where to start,’ said tactician Federico Martin Armenanzas Quiroz, ‘It was shifting to the left but the pressure was on the right.’

In the eight-strong Swan 45 class it was Lennard van Oeveren’s Motions that took first, followed by class debutants From Now On and Blue Sky. In the CS50s, Hatari won the race. ‘We tried to stay relaxed,’ said owner Marcus Brennecke, ‘and were lucky to be the second boat at the pin end. With a left shift it looked good, then we tacked immediately and crossed the field.’

Day 2 - perfect conditions
Thankfully, day two provided a much needed 12-15kt westerly breeze. Crews assembled early for an 1100 start while the race committee set the twin courses. Although wind shifts of 20-30 degrees kept them guessing, there was time to schedule two starts for the full fleet.

First away, the CS36s favoured the right-hand side of the course, tacking NW until just off Sainte Maxime. Then came the 42s, where a more southerly course led them closer to St Tropez. Whereas on day one, the yacht that won the start often led to the finish, there were more tactical decisions to make today as yachts hunted the pressure and called the shifts.

In the 36s, G-Spot maintained their unblemished scoresheet with two bullets adding to yesterday’s one. ‘Though it seemed we were ahead of everybody, in reality we have been fighting, especially in the second race,’ said Serena di Lapigio. Perennial sparring partner, Vitamina was close on their heels in second place, but the battle for third, between Sixth Sense, Sease and Fra Martina, proved much closer.

In the 42s, the top two remained unchanged after three races. The impressively consistent Natalia led, adding a bullet and a second, while her closest rival was Jerome Stubler’s Raving Swan who later commented, ‘The wind was moving 20-30 degrees and from 10 to 20kts, so you needed to trim quickly and steer to the angle in the shifts.’

A duel developed in the 45s. Though Motions was still the clear leader with two firsts and a second, Fernando Chain’s From Now On mounted a spirited challenge with just two points separating the two.

‘It was a great day for sailing with nice winds,’ said Chain. ‘There were big wind shifts, but we have a very fast boat and are learning how to move on it. Whatever the result it was worth it just to come here.’

The big 50s loved the extra breeze, surging upwind and flying back down at around 15kts. With a first, second and fourth, Hatari topped the leaderboard again after three races. However, compatriot Hendrik Brandis’ Earlybird leapt up the rankings with a near faultless first and third, putting him in second place overall.

August Schram’s CS50, Stella Maris also scored a well-earned bullet in the last race, propelling them into third overall and delighting the owner who said, ‘It reminded me a lot of our lakes in Austria – very little waves, many wind shifts and lots of gusts. ’

Day 3 - dying breeze limits racing
An early breeze quickly died away on day three, allowing just one race for all classes. It proved a day for upsets, with leaders in every class putting in mid-order finishes.

Unsurprisingly, G-Spot remained top of the CS36 class, but was nevertheless outperformed by Ferragamo’s ThirtySix, which took first, followed very closely by Italians Fra Martina and Sixth Sense. ‘We gave more importance to speed than angle,’ said Ferragamo, ‘Overall the team did a great job.’

In the 42s, serial winner Natalia could only manage fourth, allowing Raving Swan to chip her lead down to two points and Barry Sampson’s Long Echo scored a welcome first. According to Sampson, ‘Everybody started at the committee boat but we chose the pin end. It was tricky on port tack because the waves were slowing us down. We just crossed the fleet, although they very nearly got back to us.’ Furthermore, Motions only managed sixth place, allowing the Argentinean newcomer, From Now On to leapfrog into first place overall.

Jan de Kraker’s K-Force stayed left and took a well-earned win to move up to third place overall. Although later he said, ‘In shifty weather it’s not all about the sailing, you need also to have some luck.’ 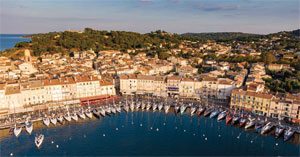 Above: the old harbour of St Tropez was a glamorous venue for the Swan OD fleets which gathered en masse for the grand finale of their racing season.
Below: there were 16 ClubSwan 50s, many of which had world class professional sailing talent onboard, in addition to 10 CS36s, seven CS42s and eight Swan 45s 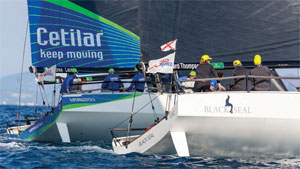 The biggest upset came in the CS50s, where leader Hatari finished in 11th place, thereby reducing her overall lead over Earlybird to a single point. Cuordileone’s win moved her up to third overall.

Day 4 – tactical sailing rules
Fluky easterly winds again affected the final day’s racing, allowing two races for the two smaller classes ut only one for larger yachts. In the CS36s G-Spot clung onto a commanding lead. Three bullets at the start of the regatta had set them up and some excellent tactical sailing allowed them to fend off a late challenge from Fra Martina.

Stubler’s CS42, Raving Swan gave a masterclass in consistent performance and were level-pegging with Natalia after the first race, but in second place overall as they hadn’t won a race that week.

In the Swan 45s, last year’s World Champion Motions made it two in a row, although there was an element of match racing with From Now On. Finishing third, van Oeveren said afterwards, ‘We were two points behind after day three but sailed as well as we could.’

Finally, despite the slip-up the previous day, CS50 Hatari closed out the regatta to win a second consecutive World Championship after an almost flawless second place, seeing off stiff challenges from Earlybird and Cuordileone.

Prizegiving
After the daily prizes were jointly presented by hosts, the Société Nautique de St Tropez and the town of St Tropez, the winners were given a beautiful piece of modern art featuring the famous red and blue swirl of ClubSwan Racing.

Nautor Group’s chief executive Giovanni Pomati paid tribute saying, ‘We are at the end of this fantastic season. Thank you to the city of St Tropez for hosting us and giving us the opportunity to see this incredible event, which will remain in our hearts for a long time.’