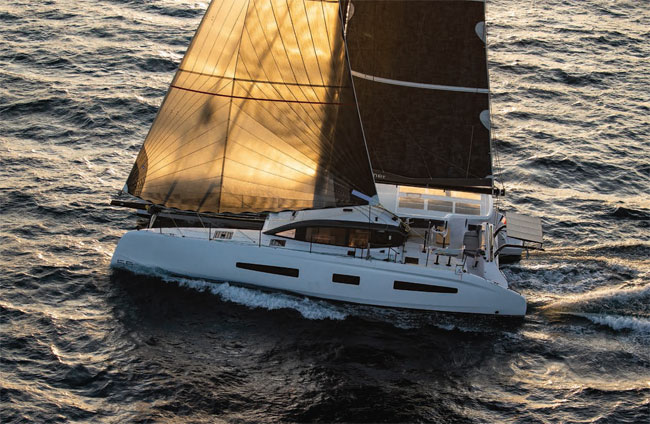 A brand new model from Outremer is a major event in the multihull world due to the French ocean cruising cat brand’s well-earned reputation for all-round excellence. And it’s been a very long time since the last one. An elongated, performance-optimised version of the stalwart Outremer 45 was launched five years ago as the 4X, and promptly won a clutch of awards, but the Outremer 55 is the first totally new boat added to the range in almost 10 years. Hull number one was launched and seatrialed in the Mediterranean shortly before Christmas and first impressions quite strongly suggest that once again, they’ve nailed it.

The design brief for the 55, which plugs a rather large hole in the range between the well-proven 51 and the racy 5X (which is actually 60ft long with her new reverse bows), was given to VPLP and their frequent collaborator, the former automotive design guru Patrick Le Quément, who is responsible for the cockpit and exterior design, ergonomics and styling. VPLP and le Quément designed the 5X back in 2011 but the new 55’s closest relative in terms of naval architecture, structural engineering and design is arguably the Gunboat 68, which relaunched that brand as a sister to Outremer a couple of years ago. Both companies are part of Grand Large Yachting.

In both cases the challenge for the design team was, as VPLP’s Marc Van Peteghem explains, to start again from scratch without betraying the brand’s DNA, which in Outremer’s case is a unique, carefully calibrated blend of excellent seakeeping, easy handling and high performance. ‘To get where we wanted to be, we had to do I don’t know how many workshops and meetings with copious to-ings and fro-ings on approaches and parameters between the builder, exterior and interior designers,’ Van Peteghem says.

‘Our remit was to undertake a comprehensive review of possible usages,’ Van Peteghem says. ‘In other words, we had to find answers to questions such as “Who are we designing this boat for?” and “What do people do on board?” The study involved all the stakeholders in open-minded discussions where we unpacked all the problems. Everyone at VPLP was seduced by this innovative approach. We work on other projects with Grand Large Yachting, such as the Gunboats, and every time they amaze us with their mental agility and receptiveness.’

Main picture: the first all-new design from Outremer since 2011 features bold, contemporary exterior styling by Patrick le Quément. One of its key hallmarks is improved light-wind performance.
Below: the new dreadnought bows are slightly fuller to reduce pitching – which also makes the boat faster as well as more comfortable

The stand-out feature of the 55 is almost invisible unless you know what you’re looking for, but will soon become obvious to any experienced multihull skipper who sails her. It’s her load-carrying capacity, which significantly exceeds the previous generation of Outremers without affecting performance. Her payload of 4.6 tonnes almost equals that of the 60ft 5X, which is a real boon for blue water cruising. She’s still a light-displacement cruising cat, weighing in at 13.9 tonnes unloaded – about half the displacement of the 55ft models from most other builders – and after a vast amount of number crunching and CFD modelling by VPLP, her hulls slip through the water with less drag than other Outremers despite being slightly fuller. Slightly blunting the (very slender) bows actually makes her faster, as the resulting reduction in pitching motion has a greater effect on her speed than the small increase in wetted area.

What else has changed? The 2.5 metre draught of the 55’s daggerboards allows her to point about 15° higher on the wind than a typical 55ft cat with fixed keels, which makes a huge difference to upwind VMG and thus means spending a lot less time uncomfortably beating to windward on passage. The platform length to overall length ratio – a key parameter of seaworthiness in multihulls – hasn’t changed at all and remains a sensibly conservative 1:2 like any other Outremer. With a beam of 8.3m she’s wider than her sisters relative to overall length, but only slightly.

The 55’s sailplan has evolved along with the hull design to put greater emphasis on light-wind performance and in sea trials her boatspeed kept pace with true wind speed from 4kts to 12. The goal here, according to Outremer sales manager Matthieu Rougevin-Baville, is to ensure the boat can be sailed rather than motored at least 95 per cent of the time. One Outremer cat has already cruised all the way around the world on just three tanks of fuel and this boat should in theory be able to beat that. The rig has roughly the same (high but not extreme) aspect ratio as other Outremers but with the mast stepped a bit further back, on the coachroof rather than in front of it, with a compression post underneath.

The addition of a genoa, which was absent on previous models, gives an upwind sail area : displacement ratio (SA:D) of 12.4 unloaded or 9.3 with a full blue water cruising payload, which compares very favorably with the cruising cat industry standard SA:D of around 5 to 6 unloaded and 4 to 4.5 with full payload. With a selftacking jib the 55 still scores an SA:D of 10.9, or 8.2 with full load. Off the wind, a gennaker takes her SA:D up to 17.6, or 13.2 with full load. With a big asymmetric kite and full mainsail the SA:D ramps up to 23.3, or 17.5 when loaded. In other words, with the right skipper and crew on board, the ARC record could well be within her grasp.

Another significant sailplan change is the position of the headsail sheet leads. Both jib and genoa are sheeted to the coachroof rather than the forward crossbeam, the former to a track just in front of the mast step and the latter to fixed pulley blocks further aft. This has allowed the design team to put a sixseater sunbed in front of the bridgedeck accommodation without the risk of whiplash from flogging sheets.

Back in the cockpit, several innovations are bound to boost the quality of life on board. The canting twin wheels can be fixed in four positions so the helmsman can steer either standing up on the sidedeck with a cushioned backrest, further outboard on a comfortable twoseater swivel chair, fully sheltered and lower down in the cockpit in nastier weather or in-between to allow access to the wheel both on deck and in the cockpit.

As with the other Outremers, Franck Darnet designed the interior. The glass doors between bridgedeck and cockpit open almost full beam, massively improving ventilation in the saloon which is also boosted by much bigger opening sections in the forward-facing windows. The idea here is to provide enough airflow for comfort in the tropics so that heavy, fuel-hungry air conditioning becomes unnecessary. The wide-opening doors and the absence of a step or threshold help to unify the cockpit and saloon as a single, larger space. Headroom is 2.05m minimum throughout the boat, and vision height has been improved as well.

Above: the Outremer 55ʼs daggerboards are one of the boatʼs defining features. They allow it to point as much as 15° higher on the wind than a conventional cruising cat with fixed keels, which in the real world means far less time is spent beating to windward on passage. All Outremer cats feature daggerboards which means an ability to sail clear of a lee shore in almost any combination of wind and sea conditions. Few other cruising cats can achieve that without relying on their engines.
Below: hull number one was launched at La Grande Motte for sea trials in December. The first two boats will be extensively tested all the way around the world over the next three years during the Grand Large Yachting World Odyssey Rally

The cockpit table converts into a king-size bed, under protection of the bimini, which can be fully enclosed.

Just inside the saloon, an island galley unit makes it easier for the cook to socialise with crew in the cockpit and a foldable extension to the island galley gives the ability to have lunch facing forward.

Another nice feature of the saloon layout is the huge nav station on the centreline with a very clear view forward under the high-cut genoa or jib – a perfect place to stand your watch at night, or at any time in higher latitudes from the comfortable swivel chair with an almost perfect 360° view of the horizon.

The four double cabins in the hulls are cleanly styled and commendably simple with a queen-size bed in each. One of these can be converted into a dressing room, a workshop, an office or a bunkroom for a professional crew.

Sustainability has been given greater emphasis in the 55’s design, construction materials and process, systems and fit-out, with extensive research carried out to minimise the boat’s environmental footprint and to optimise energy management on board. With 1.4 kW of solar panels on the coachroof and another 800W panel on the davits, in normal use she should be electrically selfsufficient even with a watermaker and dishwasher running regularly.

The construction process has been refined with trickle-down technology from Gunboat improving the already high quality of hull lamination and making the coachroof notably stiffer and lighter despite having more and larger openings. A special formulation of NPG gelcoat is used, and reusable silicone sheets replace the usual disposable plastic for vacuum infusion.

As always with blue water cruisers, the true merit and mettle of the Outremer 55 will only be properly tested and proven by the folks who sail it around the world, but it is clearly the distillation of huge amounts of ocean cruising knowhow, boatbuilding expertise and performance sailing experience. The first two boats will be extensively tested around the world during the upcoming GLYWO Rally for the next three years. What better test?