Coming to a store near you ... the best of all worlds 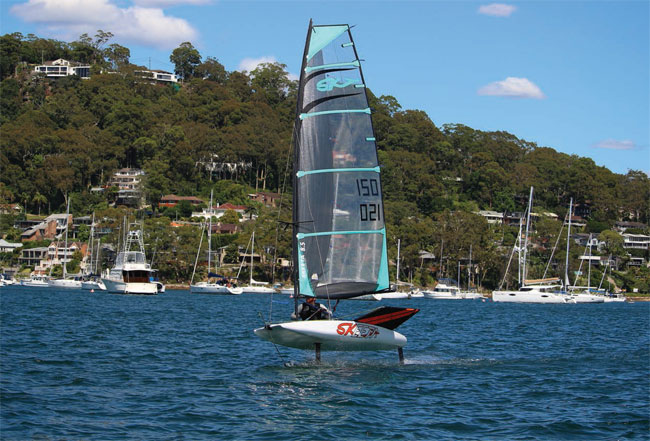 We have long been huge fans of the Skeeta production foiler, fast, light and... user friendly! Now Skeeta and their builders Cobra International have something for those (lucky) kids too

Since 1999, when Dr Ian Ward and John Ilett independently put centreline foils on International Moths and revolutionised the sport of dinghy sailing, some of the greatest innovators in small craft design have been chasing the Holy Grail. The challenge was to develop a foiling dinghy that delivers the same levels of performance and exhilaration while also being less fragile and complex than a Moth, much less difficult to sail and affordable enough to suit the average sailor’s budget. Jim and David French, a father-andson team from Melbourne, Australia realised they’d cracked it in 2016 with their Skeeta design, a beautifully simple flying scow. The next step was to find a manufacturer for large-scale production and the best candidate was Cobra International.

Unless you’re into board sports, Cobra International could well be the biggest boatbuilder you’ve never heard of. Based in Thailand with about 100,000 square metres of hi-tech production facilities and a highly skilled workforce of 2,500, they currently produce about 80 per cent of the world’s windsurfers, large numbers of surf and SUP boards, and carbon composite components for larger craft. On a tour of the Cobra site you would easily come across boards and parts for Hobie, Phantom, NSP, Starboard and more. Outside the marine industry they’re a major supplier of prepreg carbon parts for premium automotive and motorcycle brands and are also active in various other sectors including electric boards, civil engineering, UST drones and even robotics.

Main picture: the Skeeta foiling scow is designed to offer all the thrills of an International Moth without the violent spills, thanks to its unique fully articulating centreboard foil which makes the boat easier for average sailors to master. With Cobra’s efficient production, the Skeeta is also a lot more affordable than most other foiling dinghies

While other designs have addressed some of the Moth’s inherent drawbacks, Jim French says the Skeeta ‘has gone further to solving most of them'. He and David have also created a scaleddown version designed for kids, the Nikki. Thanks to their relative simplicity, both boats can easily be rigged and launched in 15 minutes, but the most obvious difference between these and most other foiling dinghies is that they have a scow hull form, rather than a narrow skiff shape. That makes them inherently more stable and forgiving.

In displacement sailing mode with the foils unclipped from its centreboard and rudder, the Skeeta is suitable for novices, almost as easy to sail as a Topper or Laser and yet remarkably quick. In foiling mode it’s nearly as fast as a cutting-edge Moth – you can expect around 18kts of boatspeed in 8kts of breeze and up to 30kts in optimum conditions – but it’s much easier to handle. Its unique, fully articulating and freely pivoting foil on the centreboard gives a gentler ride than other foiling systems while greatly reducing the risk of violent crashes and pitchpoling. It also avoids the need to adjust the rudder foil’s angle of attack while sailing.

‘It’s still relatively unknown that the flap on a foil causes lots of problems,’ Jim French explains. ‘With a flap, the front part of the foil is always in laminar flow but if it’s angled downwards as the boat’s crashing, it will keep pulling the boat downwards until the bow goes underwater and the boat does a somersault. With the whole foil moving instead, it can save itself from a crash. With our system, as soon as the wand senses the bow going down it flips the foil up and the whole foil is lifting. If the foil becomes ventilated or breaches the surface, the hull will just touch the water and skip back up again.’ A further benefit is the ability for sailors to easily adjust their ride height on the fly, partially retracting the wand to reduce their elevation and stay in control in very strong or gusty winds.

Another benefit of the Skeeta and Nikki designs is their weight-carrying ability. ‘A stayed mast with adjustable spreaders is the only way you can manipulate the rig to suit your crew weight,’ David French says. ‘With an unstayed mast you just can’t do it, which is why people who sail most types of singlehanded dinghy are all the same size. We also have three different sail sizes for the Skeeta and Nikki to encompass as many different crew weights as we can.’

The boom vang track is also a key innovation, which greatly reduces the forces acting on the mast. ‘The rig for a foiling boat has to be completely different,’ Jim French says. You need triple the amount of leech tension.

An OK dinghy has up to 25kg of tension in the leech, for the Skeeta it’s around 80kg. In a foiler if you don’t have a controlled mast and a very tight leech, you’ll end up falling in to windward all the time. As soon as you get the apparent wind up, the top of the sail being fanned out acts as a windward lever and just pushes the mast to windward.’ 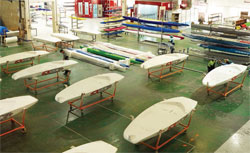 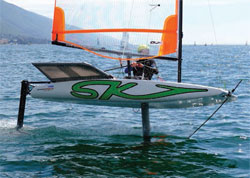 Top: Skeeta production at Cobra’s huge factory in Chonburi, Thailand. The boats are built with an EPS foam core and a single shot, closed mould epoxy lamination process.
Above: the Skeeta’s little sister Nikki now brings the fun of foiling to the kids too.
Below: Cobra also builds the electric foiling Fliteboard and other watersports products featuring integrated electronics 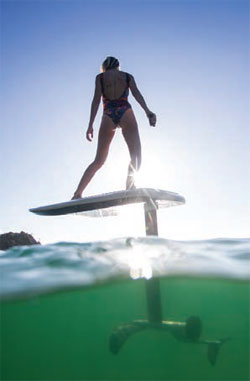 With their design now proven, one problem remained. ‘After building prototypes with carbon frames and stringers like I used to in the Moth days, I realised there was no way I could make this into a production boat,’ Jim says. ‘Just like a Moth, it would be way too expensive.’ But he had a solution. Earlier in his career, Jim had spent a while developing custom-made windsurfing race boards for Olympic Gold Medalists Bruce Kendal and Bruce Wylie, who is now head of Watersports at Cobra. He knew that the EPS-cored epoxy construction of sailboards would work just as well for a scow and it’s ideal for large production runs.

‘Jim and I first worked together in the mid-1980s,’ Wylie recalls. ‘It is great to be collaborating again, combining Jim and David’s decades of expertise with the unique craftsmanship and volume manufacturing capabilities at Cobra.’

‘It was great to reconnect with Bruce after all these years,’ Jim says. ‘They have been great at giving us exactly what we need. I already had a fair idea of what was needed strength wise and torsional stiffness wise, so I worked with the Cobra team and we came up with a specification.’

‘It’s got stringers, high-density foam areas, unidirectionals, you name it,’ David says. ‘There’s a lot of structure in there and the build recipe is quite involved, but it uses the same methods as the sailboards and we’re very pleased with the results.’ Cobra uses a moulded EPS foam core blank, assembled with a mixture of woven and biaxial glassfibre, localised carbon fibre reinforcements and G-10 inserts, all wet laminated into closed vacuum female moulds. With hull weights of just 32kg (Skeeta) and 23kg (Nikki), the boats are impressively light but also extremely strong and stiff.

‘Because they build so many different brands of the world’s best sailboards, Cobra are very good at keeping secrets,’ Jim says. ‘Their CEO, Danu Chotikapanich, said to me ‘we will never tell anyone how your boats are built. If someone wants us to make a similar one, they will have to design it.’

Jim and David built the plugs in Australia and sent them to Thailand, where the moulds were made and the boats went into production – first a limited run of twenty 11ft Skeeta prototypes in 2018, which were all snapped up by Quant Boats, and then full production of a refined 12ft design at a rate of around 50 per month. ‘It’s really good to be in a situation where we can expand production as the market grows and potentially scale up to building thousands of boats per year,’ he says. With efficient production the Skeeta’s current retail price is less than half the cost of a Moth, with high-spec hardware and top-quality sails from Doyle.

The future’s looking bright for the Skeeta Foiling Craft and Cobra International partnership with strong demand for both models. Melges is marketing the boats in the US, Quant Boats in Europe and GP Watercraft in the UK. ‘Other distributors will be appointed in due course,’ Jim French says.

Cobra, meanwhile, also continues to push the boundaries of composite engineering with encapsulated electronics in groundbreaking products such as the Flite electricpowered foiling surfboard, and was recently involved in building the prototype for the Seabubble electric foiling water taxi. They’re also renewing their focus on the OEM market for composite structures, foils and components in marine applications. With their technology, marine experience, production expertise and economy of scale, it makes a lot of sense.