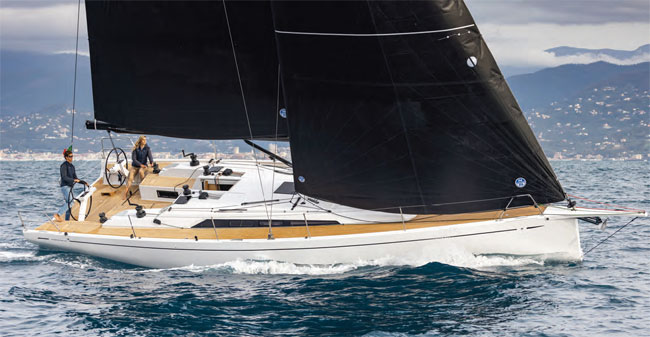 The confident and very successful Grand Soleil shipyard gave the brilliant design talent (and regular Seahorse contributor) Matteo Polli free rein with their first collaboration. The result is exceptional... in every sense

The proof of the pudding is in the eating. And the old saying holds true for yacht designers and builders too. No matter how much CFD modelling has been done, the first sea trial of a new model is always a nervous occasion. Can it match its polars? Could it even beat them? Whatever the numbers say, when you take the helm does the boat behave, respond and feel like a thoroughbred? When the brand new Grand Soleil 44 Performance set sail for the first time off Portofino, it had a lot to live up to.

The boat’s designer Matteo Polli gave his own verdict. ‘With the helm in my hands, I was able to judge the characteristics of the boat in various different wind conditions,’ he says. ‘The GS44 sailed well at all speeds, both upwind and downwind, confirming my expectations as a pleasant and fun hull to be at sea with, especially thanks to the ability to make careful and precise adjustments to the sails and the well-designed deck layout.

‘Even in windier conditions, pointing high on the wind and at a steep angle of heel, the helm responds well,’ he says. ‘You can even afford some handling errors: her stability allows you to carry full sail even in strong winds, an interesting aspect for a boat that does not necessarily rely on having the weight of a full crew on the gunwale.’

The GS 44 is a particularly important boat for the builder and the designer. Polli is the most successful ORC designer in recent years – his boats have won three world championships since 2015 – but this is his first design for Cantiere Del Pardo and it had to be even faster – but with a higher-volume hull, too. Likewise for the shipyard, this is the most race-focused boat they’ve built in a long time but it still has to work equally well as a cruiser. Easy handling for a shorthanded crew is crucial.

‘We had a range of conditions between 6kts and 14kts with sea state from calm to 0.5m waves with a pretty long wavelength,’ Polli says. ‘The boat was equipped with a cruising fully battened mainsail and furling jib plus a furling Code 0 and sailed in double handed mode. Unfortunately the instruments were not calibrated so we had the chance to check the speed but not the angles.’

That said, even with cruising sails the boatspeed read-outs were promising. Top speed close-hauled was 8.2kts and 15.5kts was achieved on a beam reach with a Code 0, which is remarkable for a production cruiser-racer. There wasn’t a gennaker or spinnaker on board so the boat’s downwind potential is yet to be confirmed.

So how is this boat different to Polli’s previous designs? ‘The GS44 being larger and with a more cruiserracer soul compared to more racing oriented designs I did in the past, needed a diverse approach on the hull shape,’ he explains. ‘Extensive use of CFD allowed me to find the best compromise between rating and performance while trying to maximise real performance, which is always important even when racing on handicap. More attention was paid to the low wind range where boats with such a high level of comfort tend to lack speed and fun factor.’

‘The most important feature of the hull is the ability to change the shape characteristics as the heel angle varies, passing from a relatively narrow, dry and low prismatic shape when upright to a wide, powerful and longer shape at higher heel angles. It is particularly challenging trying to achieve this goal while maintaining the correct longitudinal trim balance and of course the volume for the interiors. The result can be easily seen looking at the boat from the stern and when entering in the saloon… hopefully soon we will also see it on the scoreboards!’

The GS 44 is very much an all-rounder. ‘From the design perspective, I have tried to achieve an all-round performance profile without preferring one range of points of sail to another, looking for a balance that could be enjoyed both when racing and when cruising,’ he says. ‘Of course particular attention has been paid to VMG performance since it often represents the largest percentage of sailing, not only during inshore racing.’

Why the pinhead mainsail and fixed backstay? ‘A square top mainsail can be a big performance booster in some conditions but running backstays are not really a feature that most of the cruising market would accept,’ Polli explains. ‘Nevertheless, the rig has been designed with quite a long crane to allow a pretty wide mainsail head. And it is still possible to convert to running backstays and square top mainsail.’

Two things worth noting are the single rudder and lack of chines in the boat’s aft quarters. ‘That decision has many reasons behind it,’ Polli says. ‘And it’s not really true that a single rudder blade configuration makes a boat more difficult to steer provided it is designed correctly.’ The twin rudders and chined hull combination works well at high heel angles and high speeds, he says, but that only happens when power reaching in strong winds. ’On all other points of sail and also when mooring, a well-designed single rudder can be more efficient. For the GS44 I have designed a fairly big rudder blade and positioned it quite far forward to avoid ventilation at high heel angles. This created some problems with the boat’s interiors, which the yard staff solved brilliantly and the result when sailing is remarkable. Pushing the boat hard at true wind angles of even less than 90° under a big Code 0 in 12-14kts and with 25° to 30° of heel, I never managed to lose control at the helm which is surely reassuring.’

The GS44’s big foretriangle is another key design feature. ‘Large headsails help in acceleration not only out of tacks but also during starts, and it is particularly evident in light wind situations,’ Polli says. ‘This is due to the aerodynamics of this kind of sailplan and not about boat handling.’ With a non-overlapping headsail the amount of sheet to be pulled when tacking is very small, he explains. ‘And the Race deck layout, having jib tracks on the coachroof, allows really narrow sheeting angles and in most cases just two metres of rope is sufficient to tack the jib.’ By contrast, the Cruising deck layout has a self-tacking jib as standard. 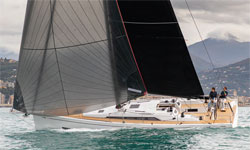 Above: the Grand Soleil 44 Performance logging 15.5 knots on a beam reach with a cruising Code 0 and its designer Matteo Polli at the helm. Not bad at all for a boat with teak decks and a full cruising interior, and in just 12-14 knots of wind. The fully optimised race version will go even faster – and that’s before you add a square-top mainsail and runners.
Below: one of the go-faster options on this boat is a pair of transverse jib tracks mounted on the coachroof just aft of the mast, which enable the boat to point very high on the wind and allow precise trimming adjustments 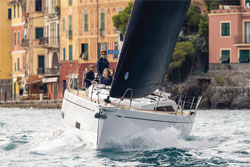 Naval architecture is clearly crucial but there’s more to the GS44’s design than that. To win regattas – and to work well as a cruiser – the deck plan and cockpit design must be as efficient as possible with perfect ergonomics. This is a pivotal part of Grand Soleil’s design DNA and that’s largely down to Nauta Design. While the GS44 shares many key features with the rest of the Grand Soleil fleet, the emphasis on racing has produced some new ones, as Nauta founding partner Massimo Gino explains: ‘It has a modern deck layout that racing sailors will appreciate for features that keep it very clean and functional,’ he says. ‘For example, the genoa sheet is concealed in a lead that runs under the coachroof all the way up to its winch.’

‘Racers will also appreciate the fact that on request, the longitudinal genoa tracks can be replaced by two transverse tracks placed just aft and at the side of the mast base on the coachroof,’ he says. ‘This innovative layout is typical of pure racers and allows for finer genoa tuning and very close-hauled sailing for better upwind performance. Better boat performance and better sailing sensations are the result of this race-friendly deck layout.’

One of Nauta’s key strengths is their ability to work collaboratively with naval architects. ‘Early in the project we received a project brief that included a long J dimension,’ Gino says. ‘We managed to do an excellent job of reconciling the elements imposed by the powerful sailplan with the interior design and arrangement. We met the J length requirements and also designed a saloon that feels large and is comfortable, bright, luxurious and perfect for a yacht this size. We also managed to lengthen the cockpit a bit and to widen it so that it’s almost as large as the one on the Grand Soleil 48.’

‘Thanks to this increased size, the two halyard winches beside the companionway, the two primary winches on the coamings and the winches for the mainsheet further aft are far enough away from each other. This is a big advantage for racing because an increase in distance between crew makes for better efficiency and safety while manoeuvring. This is one of the most innovative aspects of the GS44 Race cockpit layout.’ The cruiser-racer version has a four-winch layout.

Also at Portofino to test the new model was Enrico Zennaro, a highly regarded professional sailor, who also gave it a double thumbs-up. ‘The hull with its narrow waterline performs very well in light airs, a feature also confirmed by the upwind angles and acceleration coming out of tacks,’ he says ‘After the first few manoeuvres, you realise that everything is very well balanced.’