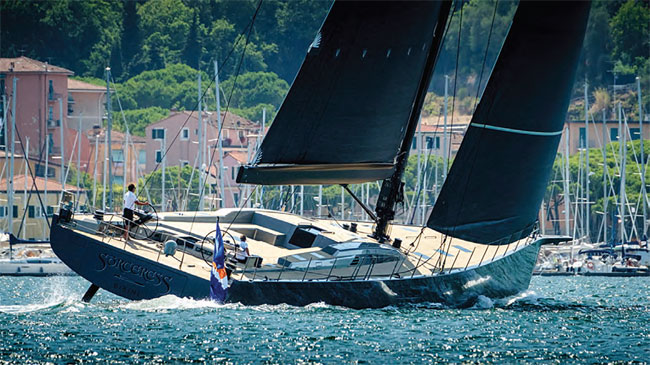 Reckmann have long been acknowledged as producers of the Porsche of sail furlers in terms of engineering and reliability. But maintaining this hard-won reputation means never standing still

Nearly all sailors know that the Reckmann brand is a guarantee of superlative build quality and rocksolid reliability. But to keep its enviable position at the top of a fiercely competitive market for four generations, this family-owned company has maintained a brisk pace of constant innovation, incrementally improving and evolving its product lines to stay ahead of the game in quality, functionality and long-term value for money.

That’s why so many of the world’s finest yachts have Reckmann furlers on their bows and in their booms. Strong, collaborative partnerships have been forged over the years with many shipyards. One of these is with Southern Wind Shipyard (SWS), the builder of high-performance, carbon composite superyachts.

Like Reckmann, SWS enjoys a stellar reputation for build quality and reliability, which its location in Cape Town, South Africa has helped to foster. Almost every yacht they build must withstand a maiden voyage of at least 7,000 miles to the Med or Caribbean (and frequently further), inevitably sailing through some seriously heavy weather en route to owners who expect their brand new yacht to arrive in perfect condition. It’s a heck of a shakedown and SWS has a very strong incentive to fit the strongest sail-handling systems. ‘We have worked with a variety of furler suppliers over the years and most of our recent boats have Reckmann furlers because they are among the most reliable,’ says SWS technical manager Yann Dabbadie.

Main picture: semi-custom yachts need semi-custom sail furling systems and Reckmann is the default choice for many of the worldʼs top builders. The German furler makerʼs solid reputation for reliability is founded on engineering excellence and rigorous testing of individual products before they are delivered. Thatʼs why Southern Wind likes to fit Reckmann kit – with a 7,000-mile delivery trip for every new boat, the appeal is obvious

Another thing the two companies have in common is a semi-custom build philosophy and an ability to maximise its advantages. Reckmann’s superyacht and large racing yacht furlers are comprehensively engineered to standard designs to ensure maximum reliability but they’re hand built to order and individually, rigorously tested. While the core technology has been proven over hundreds of thousands of sea miles, the furlers are often customised to precisely fit an individual yacht and its owner’s sailing programme.

Likewise, SWS builds yachts on standard hull platforms to achieve a higher degree of reliability than a full custom shipyard can deliver, but apart from the underwater shape and the position of the mast, everything – deck, superstructure, freeboard, keel and rudder types, accommodation and more – can be completely (or partially) customised. Down below, there is little that cannot be moved. Each SWS yacht has its own look and individual character but the semi-custom approach makes them more versatile and cost-effective as well as more reliable.

‘We work with design studios and naval architects at the top of their game such as Nauta, Farr and Reichel/Pugh to develop and engineer the basic design package,’ says SWS commercial director Andrea Micheli. ‘Over the past quarter of a century we have continuously upgraded and finetuned these platforms, as well as our own construction processes, to ensure they remain at the forefront of technology. But semi-custom does not mean less choice. It means customising all that is visible on the yacht while relying on tried-andtested solutions for the elements that are invisible. Robust reliability is a by-product of the series methodology we have perfected, based on smart repeatability.’

This extends to rig design, too. ‘Our approach is to use a semicustom rig as a starting point, offering a customised sailplan, mast modulus and standing rigging based on the programme of the boat,’ Dabbadie explains. ‘The project becomes even more customised after the captain and owner provide their input and preferences for locks, trysails and other features so in the end each rig is quite customised.’

Occasionally, a disruptive technology comes along and requires a semi-custom builder’s finely tuned platforms to be reengineered and that’s when it pays to have strong partnerships with key external suppliers – a smart design loop can be created and a solution developed collaboratively. A good example of this is the recent advances in sail technology such as Doyle’s Cableless code sails and Structured Luff headsails, and North Sails’ Helix. These innovations are real game-changers not just in terms of performance, dramatically reducing luff sag and cutting weight aloft while improving the luff’s projection to windward; they also make the sails easier for the crew to handle on deck. However, they also change the way tack, halyard and forestay loads are transferred. Both of the yachts currently in build at Southern Wind – SW96 hull number three and SW105 number four – will be using structured luff headsails and cableless staysails.

‘The owner loves his racing and the choice was obvious to us,’ says, Riccardo Benoni, captain of SW9603. ‘The advantages are to reduce the sag of the headsails, broaden the true wind angle usage of code sails and lastly but more important to reduce the load, hence the weight of the mast.’

Different solutions were required for upwind and downwind sails. ‘A cableless gennaker will have less combined load on the tack line,’ Dabbadie explains. ‘We could engineer the bow or bowsprit to be lighter but we prefer to give full flexibility to the owner, making it possible to retrofit a conventional sail. Therefore the engineering will be made to consider a higher load.’

For the headsails it was a bit more complex. ‘On a structured luff jib the combined load of stay and tack also comes down but we differentiate between the forestay and jib tack,’ Dabbadie says. ‘The forestay load decreases but for safety reasons and to allow the possibility to fit a normal sail, we keep the engineering and construction for a normal stay load. The tack load of a structured luff jib actually increases a lot, so we are upsizing the engineering and hydraulic cylinders. Our philosophy is to allow full flexibility and safety instead of chasing the couple of kilos that could be gained there.’

The massive increase in tack load required major changes to the Reckmann furlers used in SWS’s standard rig packages, which spurred Reckmann to develop a new model for structured luff sails: the UD-4sctc. ‘The load on the standard tack slider is around two to three tonnes with a conventional sail,’ says Reckmann chief executive Marcus Schuldt. ‘The cableless genoa transfers nine tonnes of load from the forestay to the furler’s tack swivel.’ With many other clients expected to start using the new sail technology in the near future, Reckmann had to figure out how to build furlers that were more than three times stronger – and fast. 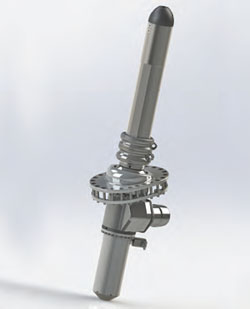 Above: launched in response to the growing popularity of cableless headsails, Reckmannʼs new UD-4sctc furling gear is made of high grade duplex stainless steel and engineered to cope with three-times more tack load than a regular Reckmann UD-4 furler without being significantly heavier than the standard model. Using a cableless genoa on a Southern Wind 96 transfers nine tonnes of load from the forestay to the furlerʼs tack swivel 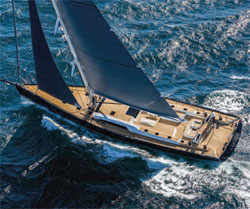 The standard tack slider was duly redesigned and beefed up, but further refinements were needed. ‘We have used high-grade duplex stainless steel for maximum strength with the lowest weight,’ Schuldt explains. ‘The special torque tube on which the slider travels and all other above-deck parts are made out of duplex.’ Despite the massive increase in strength, these new furlers are only slightly heavier than the equivalent standard models, he says, because duplex steel has a superior strengthto- weight ratio. Thus the weight reduction performance advantage of the lighter cableless sails is mostly preserved. The Reckmann furlers’ unique Real Time Adjuster, which allows a crew to adjust stay tension under sail, has also been preserved.

Two other Reckmann furlers complete the set for SW9603. The CZ-8 code zero furler is a below deckmounted, hydraulic turning padeye. ‘Its compact design and light weight makes it ideal for all code zero and light-wind furling purposes,’ Schuldt says. ‘And because of its high furling speed even extremely large sails can be furled very fast.’ Excellent corrosion resistance allows it to be mounted in a yacht’s anchor locker and Reckmann supplies a very wide range of stay connectors.

The staysail, meanwhile, is set on a Reckmann SF-15s furler – a combination of a turning padeye and a hydraulic stay tensioner. ‘The selfaligning deck suspension allows a flush deck installation and avoids bending loads on the extended piston,’ Schuldt explains. A strong hydraulic brake stops the sail from unfurling on its own and a removable stay connector with a quick release pin enables faster sail changes. ‘I’m excited to see the efficiency of the cableless staysail in strong wind,’ says the captain of 9603. ‘Often on a conventional rig this sail has high sag ratio but with the cableless technology we should have a nice blade-shaped sail.’

SW9603 will soon be delivered through the Roaring Forties to Sydney, then on to New Zealand where her owner, captain and crew are due to defend their title in the Millennium Cup. After that, it’s either a tour of the South East Asian regattas and some cruising on the way, or a cold-water cruise to Alaska and the Transpacific Race in 2022. Meanwhile, the Reckmann team is working up a larger version of their new structured luff headsail furler for the next SWS yacht in build, the fourth Southern Wind 105.

‘Reckmann furlers are not the cheapest but they offer the best value for money,’ Schuldt says. ‘Most superyachts trust in their reliability, performance and durability. The gears are rock solid, long lasting and require very little maintenance.