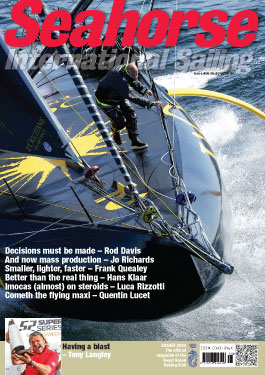 What’s next?
Take advantage of this unplanned opportunity for a re-boot. But please think before you speak. ROB WEILAND

Go your own way
HANS KLAAR is not the sort of seafarer you bump into every day of the week, but then neither is our long-distance interviewer ØYVIND BJORDAL

Elevating Imoca
For some months the VPLP office has been running a discreet study of future Imoca foiling options for the class. And now LUCA RIZZOTTI has seen the results

Master of the dark arts – Part II
JO RICHARDS walks JAMES BOYD through the twists and turns of a career that now takes in rotomoulding, dinghy design and Olympic gold

World news
Masters of the Vendée Globe (or so they hope), how it all began for MICH DESJ, of TONY RAE and kangaroos… facing up to Cup defeat. Plus some clever (and overdue) race directing. ALEX THOMSON, KY HURST, JEREMIE BEYOU, PATRICE CARPENTIER, IVOR WILKINS, BLUE ROBINSON, DOBBS DAVIS

Rod Davis – Decisions decisions
Yes, they will shortly have to be made. But how?

ORC – Passing the hours
Lockdown has allowed time for dedicated fans of rating mathematics to really crank up their game. But is that exactly a good thing… DOBBS DAVIS

52 Super Series – Focused passion
ANDI ROBERTSON gets to know one of the loyallest of all Super Series supporters, ‘multiple’ TP52 enthusiast and skipper TONY LANGLEY

Seahorse build table – Back in the game?
Their man in Adelaide BRET PERRY has got Farr Yacht Design back into one-designs again

Sailor of the Month
Not what you’re expecting…