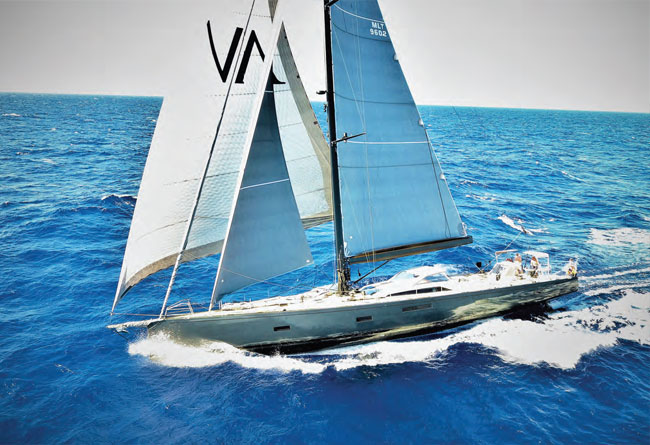 Win/wins are rare in any walk of life yet every now and then a change of approach, a new concept or a breakthrough in technology triggers a step change in thinking. In the Grand Prix and superyacht world Doyle’s Structured Luff sails have delivered one of those key moments in design.

Doyle Sails’ innovative approach has not only provided a new generation of higher performance sails, but triggered a revolution that looks set to have a far greater knock- on effect. Indeed, so significant are the benefits that there are many who believe that Structured Luff technology has the potential to transform how yachts are designed and built from here on out. Furthermore, the breakthrough is now considered to be equally as important for cruisers as it is for the racers for which it was originally developed.

At the heart of this exciting new development is in changing the manner in which the load in the luff of a sail is distributed – and the gains are big. ‘In some instances, we are reducing loads by up to 50 per cent,’ explains Doyle Sails International’s chief operating officer Emma Hendy. ‘Reducing luff sag is one of the biggest factors in allowing our sails to achieve more driving force. On some of the bigger boats we’re seeing a reduction in sag at the middle of the forestay of up to a metre, which in turn means that the sail can be projecting a metre further to windward. So there are some serious benefits for racing superyachts. But from a cruising standpoint there are massive advantages too, where the reliability of the furl, the reduction in weight and the fact that these new sails are easier to store are all important factors in this area.’

So, what are Structured Luff sails?
‘This technology came out of the free-flying code sails we were building a few years ago where we took the cable away and put a band of carbon up the front of the sail to replace the traditional job of a cable,’ says Doyle’s superyacht sail coordinator Matt Bridge. ‘As part of that and to distribute some of the straight-line load, we put a lens structure in behind and into the sail. These are continuous fibres that run from the head to the tack in the front of the sail that give us the possibility to shape the front of the sail and distribute what used to be a straight- line load back into the sail. Now we've taken that thinking from the Cableless Code sails and applied it to our upwind designs.

Main picture: the Southern Wind 96 Seatius is one of many high performance ocean cruising superyachts that are now realising the huge benefits of Doyleʼs innovative Structured Luff load distribution technology. After revolu- tionising grand prix racing and superyacht sails, this technology is now set to transform the way yachts of all sizes are designed and built

‘Take a staysail as an example,’ he continues. ‘Let’s say you’ve got a sail with a 50m luff that has 1.5 per cent stay sag, that’s 750mm of sag. Over 50m, that’s a lot of sail area that is at the front of the sail where you are generating driving force.’

Among the many yachts that have already benefitted from Structured Luff sails is the 39m Tripp-designed G2. Built by Vitters in 2009 and refitted by Pendennis in 2018, her Structured Luff sail carries greater luff projection, making the sail more powerful and efficient without increasing any loads. Indeed there has actually been a significant load reduction.

But the benefits for the owner and crew of G2 go further with a big increase in the range of conditions in which the sail can be used.

‘The owner of G2 is always very keen on sailing the boat and so the sail handling was a priority for the crew,’ says Hendy. ‘With the new technology they are not only able to use the sail in a much wider range of wind angles and speeds, but the sail furls more reliably and is much easier to handle on deck. It’s also that much easier to get in and out of the sail locker and it is used a great deal more as a result. In fact, they use this sail so much now that they have had a UV strip fitted so that they can leave it hoisted for longer periods and it has become their cruising sail of choice.’

It is this increased range that is further driving the interest in Structured Luff sails but it is also a benefit that doesn’t just apply to the bigger boats.

Of the many case studies and clients that Doyle Sails now have using this type of sail, the 24m André Hoek-designed Drumfire provides a good example of the wide range that is now possible. Her code zero has an impressive operating range that extends from a true wind angle of 75° in just 8 kts of breeze, to sailing as deep as 175° in 30kts.

Another significant benefit of the new technology that is helping to fuel the popularity of these sails is that they are significantly lighter and as such they are changing the way that crews tend to handle their sails while out sailing.

‘Aboard Elfje the code zero is light enough that they can now leave it in the air as they head upwind,’ explains Hendy. ‘So for cruising boats there are the combined advantages of having a sail that furls reliably and that also requires fewer crew to handle it, along with a sail that is lighter and easier to store. The argument for Structured Luff sails is a compelling one.’

This change of approach and the significant reduction in loads has also had a big knock-on effect in the overall design of yachts. Indeed there is a school of thought that points to a possible change in the regulations that govern design and construction.

‘The fact that we can take weight out of the sail and reduce loads in the rig means that we can now work backwards down the design spiral,’ says Scott Zebny, who coordinates Doyle’s global superyacht loft network. ‘This means weight can be reduced elsewhere in the yacht which in turn takes more load out of the systems. The longer-term implications of this suggest that the codes and regulations that boats are being built to may need to be re-evaluated to take this new technology into account.

Below: one big advantage of Doyleʼs Structured Luff is that it allows code sails to be built much lighter, which means that yachts can keep them hoisted and furled while sailing upwind, ready for instant deployment, rather than having to drop and stow them. And when the code zero does come down, itʼs a lot easier to handle on deck and stow than a heavier sail with a luff cable 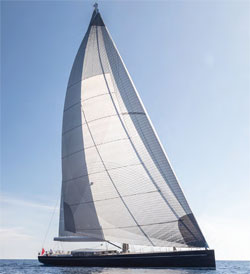 ‘While we are starting to see the true benefits of these sails, it is clear that a future where full sail wardrobes no longer have cables is not that far away,’ Zebny says. ‘It might take a few years, but it’s on its way for sure.’

Based in Palma, Zebny knows the superyacht market well, particularly in the Mediterranean. But he also knows what it takes in practical terms to manage this fleet on or off the water. He is quick to point out how big an issue the physical handling of sails is aboard superyachts, especially those that are set up more for cruising than racing where there are generally fewer crew. Having lighter sails that can be handled more easily when under way is an obvious advantage. But he also stresses that the issues of handling are just as valid when the yacht is at the dock, especially when it comes to service or repair.

‘In the superyacht world it’s not uncommon for skippers to book in months ahead simply to get the right team involved to take the sails on and off the boat,’ he explains.

‘Servicing large sails is a big part of our work here in Palma and something our global superyacht loft network specialises in – it is my job to help coordinate our team of experts around the world. There is always a big rush in September as those that are heading to the Caribbean for the winter get their sail wardrobe prepared. After that, our winter work gets fully under way for those that are staying in the Med.

‘Most people will want a full service ahead of the next season and that requires a team of experienced people that know what they’re doing. Getting sails up and down in the dock without damaging the boat or the sails can be tricky, especially in a harbour that is full of similarly sized yachts. And when they’re off the boat these large sails require some ingenious ways of dealing with them, such as using fork lift trucks to roll a mainsail around the mandrel.

‘But it’s also about dealing with some of the seemingly smaller issues. Take an in-boom furling mainsail as an example. The loads at the clew can be up to around 18 tonnes in some cases which means that clew lashings are critical. Getting these wrong not only makes furling very difficult, but can cause serious damage to the sail and trigger major knock-on effects.’

Accuracy and experience are clearly two essential ingredients in the superyacht world and when it comes to the next generation of sails, be they for racing or cruising, the combination of Doyle’s latest technology and their considerable experience in this field provides one of those rare win/win moments.