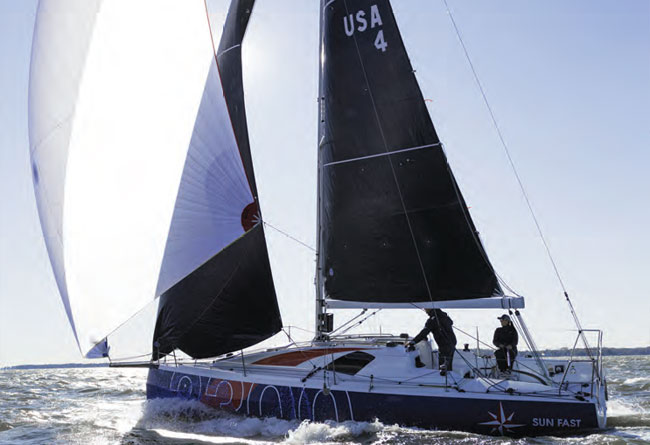 Dramatic looking, precisely tailored to its target market, well executed and winning as soon as it hit the water...

There can be few tougher tests for a new 33-footer than being thrown into the fiercely competitive Rolex Fastnet Race. To pile on the pressure, Fastrak XII, one of the new Jeanneau Sun Fast 3300s, had only been launched 10 days before the start.

While Fastrak XII was in the capable hands of experienced offshore sailors Henry Bomby and Hannah Diamond, they were as new a partnership as the boat. And yet 80 hours later Bomby and Diamond had delivered an impressive performance finishing second overall in the 61-boat doublehanded fleet. But that was just the start. They were also second overall out of 84 boats in IRC3, a fleet that included fully crewed and doublehanded entries.

Their results had been a success all round. Bomby and Diamond had proved themselves as an impressive offshore duo, while for Jeanneau, success in the world’s biggest offshore race provided further validation of a new design that had shown serious potential straight out of the box earlier in the season in the doublehanded division at Spi Ouest.

For UK’s Jeanneau distributors Sea Ventures, who set up the project, the result was not only deeply satisfying but validated what they already suspected about the potency of this new Verdier/Andrieu design.

‘When you look at the performance of the top two boats in the doublehanded fleet, the success of the JPK10.30 and the Jeanneau Sun Fast 3300 says a great deal about how far the game has moved on with this latest generation of offshore pocket rockets,’ says Sea Ventures’ Nigel Colley, himself a keen shorthanded and solo racer.

Jeanneau’s latest Sun Fast 3300 has already proven itself to be an even more potent performer than its notably quick predecessor. With offwind speeds of 15 knots easily achieved in sea trials and well above 20 knots logged during last summer’s Fastnet Race, the 3300 is a big step on from the last generation of Sun Fasts – proving quite a bit quicker than the bigger, higher rating Sun Fast 3600 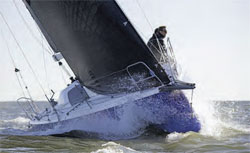 ‘These are both new generation designs that beat all of the previous generation boats, including larger and higher rating boats such as the Sun Fast 3600 and JPK 10.80 on the water as well as on handicap. There can be no doubt at all that these new boats are a big step forward.’

A glance back at some of the boat data aboard Fastrak XII from the race provides even further evidence with speeds well into 20kts on the fast reach back from the rock.

‘We know just from the demo sails we’ve been doing that she will sit easily at 15kts in 20-25kts of breeze. This alone is a step up from the previous generation,’ continues Colley. ‘But what has surprised us even more for a boat that weighs the same as the Sun Fast 3200 is how she doesn’t need a wave to surf down to get up onto the plane, she just seems to climb there herself on flat water. Her new hull shape is just that much more efficient.

‘Initially, I had some concerns over whether the twin topmast backstays would make life harder when sailing shorthanded, but this is simply not the case. The swept-back spreaders provide tremendous security during tacks and gybes, which means that you don’t have to worry about them until after the manoeuvre.

But while the 3300 is enjoying early success, the Sun Fast 3600 is also proving that she is a long-term player. In the RORC overall results for last season, the top two boats were both Sun Fast 3600s. Trevor Middleton’s Black Sheep was fully crewed and Rob Craigie’s Bellino was sailed doublehanded all season.

‘We were delighted to see these two boats leading the field,’ says Colley, ‘but there were plenty more impressive results elsewhere on the final score sheet. In IRC3 the 3600s took 1st, 2nd and 4th while in the doublehanded fleet Jeanneau Sun Fasts took four of the top five places.’ All of which bodes well for the coming season which starts with Spi Ouest in La Trinité, France, where the largest fleet at the event is the doublehanded class.

Among the other key events, the RORC season will play a big part as will the ever popular and highly competitive Transquadra race across the Atlantic for singlehanded and doublehanded entries.

Beyond 2020 the exciting news is of Olympic offshore sailing where mixed gender, doublehanded crews will be racing one-design boats of around 30ft. And while the specific class will not be announced for some time, it is clear that the 3300 is already showing good reasons as to why it should be considered as a serious contender.