When you’ve got to do a lot more than (just) make stuff... 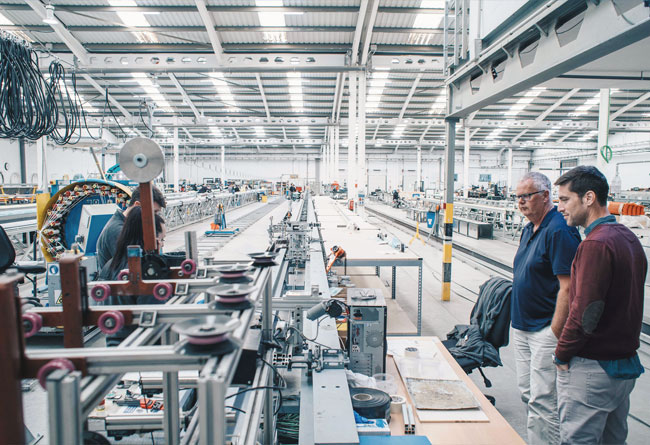 Size matters… at least it does when you are in the business of manufacturing and servicing hightech rigging for a large percentage of the of the world’s grand prix race boats and superyachts. That’s why, after facing increased demand yearon- year from new and existing clients, Future Fibres – a part of the North Technology Group since 2015 – have upgraded their service function to a much larger new facility.

At 60,000 square feet the new premises located on the outskirts of Valencia, Spain is three times the size of the company’s previous service centre in the city’s 2007 America’s Cup village.

According to Future Fibres’ new general manager James Austin, the move to the bigger building was driven primarily by the company’s sales success in the grand prix and superyacht markets, increasing demand for highly proficient service work, and the need to expand its research and development capability.

‘All of this meant we simply outgrew our old facility,’ Austin says. ‘On the racing front Future Fibres has maintained a leading position in high-profile professional classes like the TP52s, J Class and Super Maxis, and the company was also recently awarded a contract to supply rigging to all the teams competing at the 36th America’s Cup.

‘The innovative product that earned Future Fibres that contract is AEROrazr – an advanced aerofoil solution that was created by the Valencia-based team of engineers led by R&D manager Jonathan Duval’, concludes Austin.

Duval’s team has grown from three people in 2016 to 20 now working out of the new Valencia premises.

‘The expansion has allowed us to focus more on innovation and to ramp up the speed at which we can bring new products to market,’ Duval explains, evidencing this statement by citing AEROsix and AEROrazr – two cutting-edge new products his team has recently brought to market.

‘The drive towards faster and faster speeds has led our clients to look closer at rigging aerodynamics,’ Duval says. ‘Future Fibres has been able to lead the move from cylindrical to extended elliptical cable shapes.’

AEROsix is made by bundling carbon rods around a solid carbon plate inside a chafe resistant sheath to create an extended ellipse shape, while AEROrazr is an aerofoil solid carbon cable.

According to Austin, ‘the coilability, lower windage and reduced vibration of AEROsix have made it the next go-to product in the superyacht market and at the same time AEROrazr has quickly become the rigging of choice on the high-performance grand prix racing circuit.

Austin joined Future Fibres at the end of 2018 after a successful tenure as CEO at North Thin Ply Technology, a specialist company that produces ultra-thin carbon laminates used by North Sails, and in the manufacture of high-end golf clubs, bike frames, and skis, as well as in the world of Formula 1.

In addition to his leadership role at Future Fibres, Austin is also chief operating officer of the NTG Mast Group. Along with Future Fibres, this group comprises Southern Spars, which services the high-end racing and superyacht markets; Hall Spars, which focuses on mid-market racing and cruising boats; and RigPro, the group’s service division.

One of the Valencia facility’s key roles in this fully-integrated operation is as the rigging service centre for RigPro, which has other service centres located in Palma, Newport and Auckland.

‘The other service centres are responsible for customer relationship management on site,’ says Johan Ebersohn, RigPro Valencia service manager. ‘They look after de-masting the yacht and removing the cables which are sent back to Valencia for service, and then afterwards the mast is stepped again.

‘Valencia is our main service centre and it’s where we have made the investment in terms of technical resource, specialised skillset and the infrastructure – all our technology for carrying out the service work is located here.’

Ebersohn runs a 20-strong service team in Valencia and this will continue to grow steadily in line with increasing demand.

With 90 per cent of the company’s existing clients and prospective customers operating boats in and around the Mediterranean, expanding their servicing and R&D operation in Valencia was an obvious decision. ‘Being located here means we are perfectly situated to react as quickly as we possibly can to our client’s requests,’ Ebersohn says. ‘We have a lot of clients in Italy, which is nearby, and a lot of work comes in from Palma de Mallorca, which is an hour away from here. We can collect a 40-foot container containing a superyacht rig at five o’clock in the evening and by 0800 the next day it is here, ready to be worked on.

‘Servicing complex bundled carbon rigging cables is an exhaustive and painstaking process,’ Ebersohn says. ‘After carrying out a detailed visual inspection of the cable for signs of possible damage or other issues, the braided protective cover is completely removed and each individual carbon rod is inspected. The end fittings are also looked at, as well as there being proof tests for straight cables.

Below: the new Future Fibres service centre in Valencia boasts a floor area of 60,000 square feet. In addition to maintaining the rigging of a large proportion of the world’s grand prix racers and superyachts, the new hi-tech facility will play an important role in Future Fibres’ research and development programme. The rigging company’s expansion is good news for clients, who can expect a rapid fulfillment of almost any project at any time. 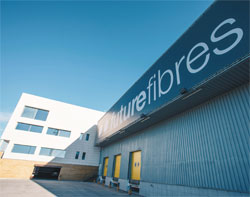 ‘We literally go into the core of the cable to look for any fractures or signs of any other potential problems,’ he explains. ‘If we detect problems we propose remedial work to be carried out and sometimes we find damage on our multi-strand cables that cannot be repaired and an individual rod is replaced.’

The fully-serviced cables are then re-covered to their original specifications, with their end fittings repainted and attached, to be shipped back to the yacht. Every service client receives a detailed photographic report confirming that the rigging has a clean bill of health until its next service date – which in the superyacht world is typically in five years’ time.

‘It’s a very manual procedure and that is something we have to do thoroughly because the product we are working with is unique in its construction method’, Ebersohn says.

‘Future Fibres’ Valencia service facility typically has between 30 to 40 projects on the go each month,’ he explains. ‘But in the company’s busy period from September to April, that can go up to 50 per month.’

Demand from superyacht clients was a key driver for expansion. ‘Often there will be three or four superyacht projects happening at the same time,’ Ebersohn says. ‘And it can get so busy at these times that the service department has to run double shifts – one from six in the morning to two o’clock in the afternoon, and a second one from two until 10 in the evening. Having more space now allows us to service more clients.

‘Now we can pretty much take on any project at any given time – whether it is a proactive piece of work that is planned a year in advance, or something that needs to happen this week.

‘We are confidently taking on many more projects, with a huge focus currently on our rigging supply to the America’s Cup, this year’s ongoing TP52 season, and also a full order book of superyacht rigging commissions, including various projects with AEROsix.

‘While this is great for the company’s future growth, from the client’s point of view, Future Fibres’ larger capacity facility has resulted in a 40 per cent reduction in turnaround time on service work.

‘Importantly, for our clients that means less down time for their yachts during service periods so they can spend more time on the water enjoying them,’ says Ebersohn.