(Still) the greatest game in town 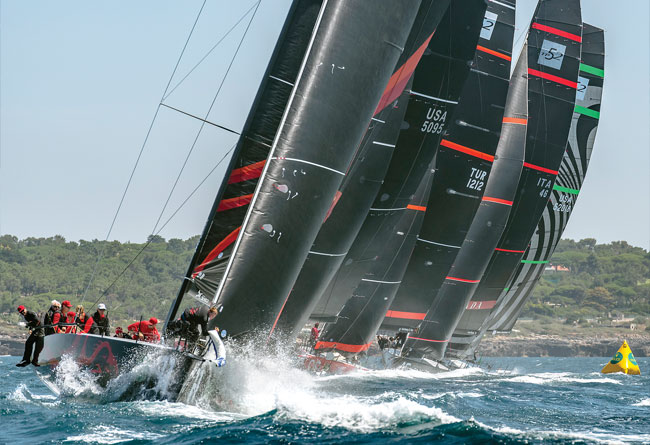 Hello, Mr Bond... a new boat from the east and a ‘new’ crew put to the test. ANDI ROBERTSON

The challenge for the 2019 52 Super Series title promises to be the most open since the circuit started in Barcelona in May 2012. Quantum Racing, so long the grand prix circuit’s benchmark team, are making their biggest ever set of changes to their crew line-up. Vladimir Lyubomirov’s Russian-flagged Bronenosec return armed with the only new-build boat this season, and a winter of fine-tuning and optimisation to seven of the nine boats that were new for 2018 (Luna Rossa is for sale and Onda has recently changed hands) will only ensure that racing is tighter than ever.

It may seem inconceivable to consider the TP52 class racing as a fleet in Europe without the presence of either Terry Hutchinson or Vasco Vascotto, but the five regattas that will comprise the 2019 season will represent a golden opportunity for new or different talent to shine. For sure, there will be no reduction in the level or the intensity of the racing.

Quantum Racing are making no fewer than seven changes to the sailing team that won three of last year’s five events and took the 2018 title by an unusually comfortable margin of 37 points (by comparison places second to fourth were covered by just 6pt). Owner-whisperer extraordinaire Cameron Appleton has been recruited by Quantum as tactician on the strength of his remarkable record of success in the RC44, Melges 40, Melges 32 and Melges 20 fleets in recent years and is considered to be a strong, smart leader. In parallel with his move to the green and black TP52 Appleton has also moved to Quantum Sails from his previous ‘day job’ at North.

After successive years with Gladiator in 2017 and the Plattner family’s two-boat Phoenix programme in 2018, 2007 America’s Cup winner Ed Baird returns as skipper-helm on Quantum Racing, working alongside another past Quantum champion Juan Vila as navigator who is back after Volvo Ocean Race duty with Mapfre.

New in the trimming team is Federico Michetti, who steps up a level from a year of Melges racing but who has sailed extensively with Appleton. Likewise, Andrew Escourt – another Gladiator alumnus – comes in on runners and grinder; he competes alongside Appleton on the RC44 Team Aqua.

Main picture: Well, you’d want a spreader mark used in a fleet made up of a dozen or so €3+million carbon yachts of almost identical speed sailed by the most competitive sailors on the planet? Did we get to the bit yet about lack of impact resistance? This is the Super Series TP52 fleet coming away from mark 1 in Cascais in last year’s world championship with the breeze nudging 25kt and a fleet about to plane away downwind like a bunch of 505s (quite apt as 505 fanatic Hasso Plattner was steering the Phoenix TP52

‘This will be a dramatically different crew from last year but we are not at all scared by the changes,’ says Ed Reynolds, Quantum Racing’s longtime team director. ‘What stands out most with Cameron, and for guys like Federico Michetti, is that while we know they have the talent and the record behind them, this is an opportunity that we are already seeing them grasp with both hands. They will also bring a little more youth to the Super Series itself.’

Big changes have been made to the Provezza afterguard for 2019. Though regular podium contenders in 2017, and popular winners in Puerto Portals, last year did not match up to expectations with their new Vrolijk boat. Tony Rey and Peter Holmberg, tactician and helm, have left. John Cutler moves from the Provezza coach boat to the helm and the hugely experienced Hamish Pepper steps in as tactician. Meanwhile, on Gladiator Tony Langley is bringing in two-time Dragon world champion Andy Beadsworth to steer while the extrovert – and very successful – British engineer steps off the wheel (likely to be swapped for a tiller) to sail in the role of tactician.

Most of the TP52 fleet are convening in Valencia in early March for a week of testing and informal shakedown racing. Only here will the net effect of the many changes to boats, crew and sail inventories become evident. At least one third of the fleet are known to have made keel and rudder modifications for this season, some minor, some more substantial.

An all-new keel bulb has been developed by Botín Partners for the latest Bronenosec and several teams have opted to update with the new shape. Many teams are also appearing in 2019 with new rudders, a traditional area for winter refinement in this milli - metre-tight class. The last two Vrolijk designs – Platoon and Provezza – also have new keels. Provezza have also shifted their rudder position in their search for a little more downwind speed.

The Vrolijk designs in particular have been seeking the ‘rip’ mode which was a strength of the Botín boats last year – the ability to drop the bow slightly upwind in 10kt or more to break a cover.

New sail ideas will also be on trial in Valencia. One popular area for development is the search for further improvement in A1.5 and A2 spinnaker design for the critical 14-17kt range, along with more flexibility in shapes to allow smoother transitions between soaking and sailing bow-up, depending on the tactical situation.

Developments of fore and aft sails are mainly incremental with a current focus on tweaking shape and construction to suit a season that is likely to see a higher average wind strength compared with 2018 – which opened with two tricky light-air venues in Croatia.

The new Bronenosec being built by Ximo Lopez and his team at Longitud Cero has the same successful hull and deck design as the 2018 Quantum Racing, Azzurra et al but with an even lighter but stiffer structure to allow greater forestay loads to be carried without causing unacceptable global deflections (or risking a failure). This ability to reduce headstay deflection to the absolute minimum was one of the benefits that the Longitud Cero-built Quantum Racing had in their winning armoury last season.

But Quantum are not standing still. According to Ed Reynolds, the title holder’s boat is having small structural upgrades to try to preserve their advantage. ‘When we built our first TP52 in 2005 the limit headstay load was 5.5 tonnes,’ says Quantum boat captain Brendan Darrer. ‘For the new Bronenosec I hear they are looking at 9 tonnes... Most of the Botíns last season – including ourselves – were working to 8 tonnes.

‘Every generation since the start of the original Transpac 52 class has seen a small increase in max load, but there is always a trade-off in weight and fittings… However, with so much emphasis on being first to the top mark, headstay tension now pretty much trumps everything else in this fleet!’

The new Bronenosec itself will not be launched until late April, debuting at Palma Vela in early May, and so will have just two weeks to be ready for the first 2019 Super Series round, the Menorca 52 Super Series Sailing Week that starts 21 May.

Bronenosec’s hard-bitten enthusiastic owner-driver Vladimir Lyubomirov – who sails more than 100 days a year as he also campaigns in the RC44 class – is an enthusiast who embraces the technical challenges as well as the ‘alchemy’ of running a full-scale, well-resourced professional sports team. Win or lose, Lyubomirov is someone who prefers to measure himself against the best, experienced owners and professional helmsmen alike. It is fair to say that after a year out, watching from the sidelines, this popular Russian skipper simply could not stay away…

Finally, for latecomers, after Luna Rossa, winners of two regattas in 2018, moved on to their America’s Cup programme full time during the winter, their fast 2018 Persico-built Botín design remains available as an extremely competitive turnkey opportunity for 2019.

While a handful of teams and boats rotate around each winter the strength and depth of the Super Series remains the same, with 12 boats starting this year’s early events and a similar number expected at the Rolex TP52 World Championship in August in Puerto Portals. The TP52 class is still the best show in town for committed grand prix owners and remains unchallenged as the premier inshore fleet attracting the finest professional sailors in the world.