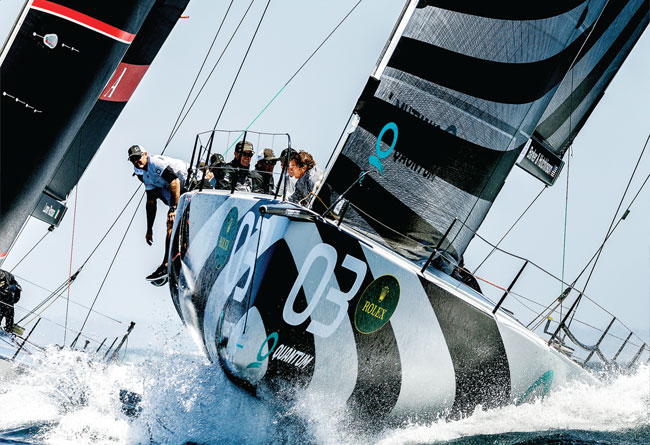 No doubt about it, this year’s Rolex TP52 World Championship in Cascais was a real test of men and machine, certainly the final two days in 25kt+ conditions. All nine races were broadcast live; a mix of images from cameras onboard the TP52s, drones and RIBs brought the action live to computers all over the world and was widely watched with peak views of near 5,000 and total views of near 400,000.

In itself this is small fry compared with other sports but as the images are also picked up for broadcast by well-known channels like CNN MainSail, Euro News, the World Sailing Show and the Nautical Channel a potentially massive audience saw and will see one or more reports on the event. Coupled with that all 52 Super Series outings on Facebook, Twitter and the 52 Super Series website are measured and this ‘audit’ tells us that these have been displayed or viewed 2.8 million times in July 2018 alone. That cannot be just family watching their beloved…

In the end the winning display of sailing skill was produced by Quantum Racing and its battle-hardened team directed by Terry Hutchinson. Dean Barker on the helm is not a bad asset in these conditions, as was the boat and sails staying in one piece throughout all nine high-octane races.

Where these two pro-driver teams were showing great composure clearly Luna Rossa are still battling imperfection, mainly caused by launching their boat late, as well as not being the collective yet that it takes to match a team like Quantum.

Tony Rey, Peter Holmberg and all onboard Provezza had a tough old week – not much went their way and quite frankly most of it is self-inflicted. Too many small equipment failures do not help but the team have not yet been even close to the team they were and which we loved so much last year. Also, Platoon made life very difficult for themselves but I bet that for the 2017 TP52 World Champion this is a one-off slip of concentration. A big slip, however, costing them joint 2nd overall to drop to 5th. But the frustration when things go wrong is easily matched by the joy of those who get it right.

Men at work… Dean Barker and Terry Hutchinson in Cascais (below) on the way to the 2018 TP52 world title. There is a lot of America’s Cup ‘feel’ about this year’s TP52 circuit with Prada and Hutchinson’s American Magic team flexing their muscles against each other (main picture) plus a plethora of other ‘resting’ Cup sailors scattered around the rest of the TP52 fleet. Grant Dalton famously once said of his then two Cup drivers: ‘if I needed a helmsman to steer for my life I would want Dean Barker, but if I needed a helmsman to race for my life I’d want Ben Ainslie (this was before Pete Burling arrived on the Kiwi Cup scene…). How the ‘older’ school skills of Barker and Spithill match up against Burling et al in flying monohulls – as opposed to the flying cats of Bermuda – in Auckland in 2021 will be fascinating to watch. 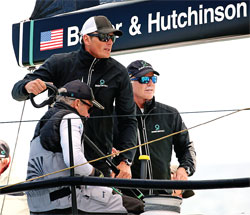 Azzurra I guess are relieved to claw back on the overall podium after two disappointing events. Certainly Alegre and Sled look back at a great championship. Both boats owner driven, Alegre by Andy Soriano and Sled  by Takashi Okura, fighting till the final race in Cascais to be in bronze position as well as for the owner-driver trophy.

In the end it was Andy Soriano who drew the long straw with a margin of 1pt over Tak Okura. But for Team Sled this was the third solid performance of the series and so after three events they are firmly in 2nd overall with 115pt. Behind Quantum (96) and in front of Azzurra (125).

Some might disagree but to me 52 Super Series is foremost the most prestigious sailing opportunity for owner-drivers to match their skills with high-level pro-drivers, not just at the end of the joystick but also when it comes to planning and managing and motivating the team. The amount of time spent off the water analysing race, weather and boat data gets close to the time spent on the water and is certainly part of the fun as well as essential to pave the way to success. To do a proper job in conditions as experienced in Cascais and leave all but Dean Barker behind you must be immensely rewarding.

With two events to go nothing is decided yet for the overall trophies. Two medium-breeze events coming up on the well-known battle grounds of Palma Bay and Valencia for 20 more windward-leeward races to bring the final verdict… there is no discard in Super Series.

Sled on average ‘only’ has to finish each race ahead of Quantum to take the title. Azzurra and Luna Rossa need to be just over 1.5 places ahead per race and Platoon and Alegre are certainly still in contention for 3rd, if not 2nd overall.

In Portals we expect 10 boats and in Valencia 11 for a grand finale. The more boats the more points to play for.

For 2019 I expect most boats to undergo modifications in the appendage department. With regattas planned in Mahon (May), Puerto Sherry (June), Cascais (July), Portals (TP52 Worlds, August) and Porto Cervo (September), for sure there will be on average over 40 races, more breeze and more variety in sailing conditions than this year. Something to analyse, plan and optimise for.

Compared to 2018, with nine new boat launchings to get through, I expect to see the majority of the teams on the water early in 2019 to test and train as well as to race the Palma Vela regatta, before hopping over to Menorca for our first event.

Team Luna Rossa will not be with us in 2019, aiming for greater goals, but their boat will not leave us and sailing her will be a familiar owner-driver team from the not so distant past. Of course we hope to see a few more additions, building new from existing moulds or even designing new and pushing hull development further up the never-ending road.

I solidly hope that also in the future we can get to your homes with full event coverage, as we had for this year’s worlds. It is a matter of money – we sometimes might seem from another planet to those watching us but I can assure you that on our planet too there are budgets and tough decisions. The neighbour’s sea always looks greener… Not trying to change the subject, just to end this page. Thank you for your time and keep checking in on us!!
Rob Weiland, TP52 and Maxi72 class manager