Lab or ocean… or both 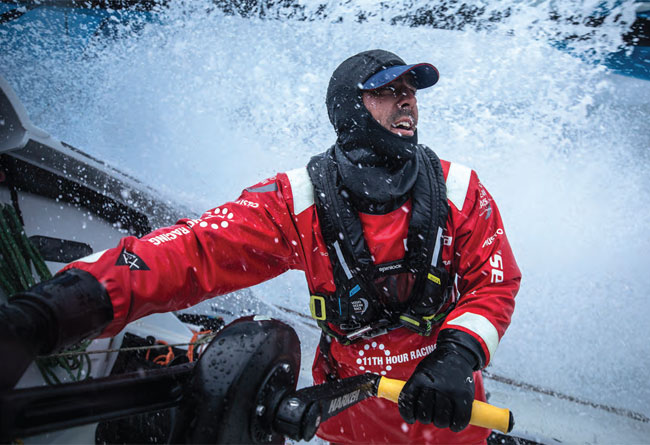 It’s too easy to spend all your time in the lab when developing technical clothing but, as Musto likes to remind its customers, at some point you do also need to get wet. And when Musto says wet, it means very, very wet

The most physically demanding Volvo Ocean Race of recent times has just finished and there are some young (and older) sailors with a new appreciation of just how unyielding the seas can be. The incredible drone footage of the Volvo Ocean 65s piling along through the Southern Ocean and across the Atlantic at recordbreaking speeds has really brought home just how unrelentingly brutal and wet these boats are. Too wet, some would argue, especially when you compare the Volvo Ocean 65 with the sheltered comfort of a cockpit on a modern Imoca 60.

In the absence of much shelter from the one-design Volvo Ocean 65, the next best thing is to make sure you’re suitably equipped for the firehosing that you’re about to receive as you venture out on deck for your watch. Three of the seven teams in this lastest edition of the Volvo Ocean Race opted for Musto technical clothing, which has been worn by more sailors in the 45-year history of this famous race than that of any other brand.

In 1994, Musto was originally established as one of the most reliable and peer-recommended brands in offshore sailing, yet it was the formation of a partnership with Gore in 1991 that really led to a significant development in the performance of modern offshore garments such as HPX, which was launched in 1994. It should be said that Gore-Tex fabric is by no means unique to Musto. In fact, it’s used by many of the world's most trusted outdoor apparel brands as their pinnacle technology for waterproof, windproof and breathable protection.

However, it’s the work that Musto has done with Gore-Tex that makes the partnership unique. Gore’s product specialist leader, Alan Douglas, comments: ‘When GORE developed Gore-Tex Ocean Technology in 1994, Musto was instrumental in the testing and validating that this technology was fit for use in extreme, extended ocean racing. We’re proud that ever since that early R&D work nearly 25 years ago, Gore-Tex fabric continues to be the product of choice for professional ocean sailing.’

Main picture: Mark Towill mans the handles onboard Vestas 11th Hour Racing as the team rolls into the Southern Ocean during leg three from Cape Town to Melbourne. ‘We had an average boatspeed of 25 knots for the first 14 to 15 days we were down there,’ he says. ‘I don’t know how Gore-Tex works but I know it keeps me dry and that’s all I need to know’

The great challenge for the sailors, and their clothing of choice, is the huge range of conditions that they will encounter in the course of one leg. Bear in mind that in this recent edition of the Volvo Ocean Race the fleet crossed the Equator four times, putting the sailors through enormous climatic changes as they traversed wildly-different latitudes in the space of just a few weeks. This is why Gore’s technology has been such a vital ingredient for the world’s leading offshore brands like Musto. Lorraine Moffat, application engineer in the performance outerwear division for Gore, summarises the technical challenge: ‘Gore-Tex technology balances durable waterproofness with high levels of breathability to ensure optimal comfort in cold and wet conditions, where the sailors have varying levels of physical activity.’ In other words, the same garments have to stop you overheating when you’re working hard, and keep you warm and dry when the body is at rest.

More recently, other brands have developed rival waterproof and breathable products and submitted them for laboratory testing. These involve placing waterproof textiles in an accelerated wear device that simulates repeated impact and abrasion in wet conditions. After predetermined intervals of accelerated wear, each textile is pressure-tested to determine the waterproofness. 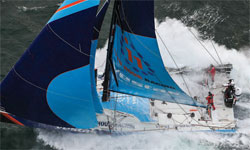 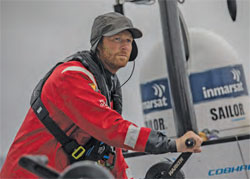 Although it all sounds good, there’s nothing like real-world testing, getting out there and actually using it in all the harshness and unpredictability of the world’s oceans, argues Musto’s marketing manager Nick Houchin. ‘Of course Musto and any other reputable brand will carry out extensive lab testing,’ explains Houchin, who has first-hand experience of what a sailor needs when he’s had many days at sea travelling at high speed. ‘I was lucky enough, as a wide-eyed 24- year-old, to be part of the five-man crew that did the Oman Sail non-stop circumnavigation starting and finishing in Muscat onboard a 75ft trimaran at the beginning of 2009.’ With 76 days of non-stop sailing under his belt, Houchin appreciates why Volvo sailors choose to rely on their own experiences at sea rather than data forensically gleaned in laboratory conditions.

Along with long-time friend and sailing partner Charlie Enright, Mark Towill was instrumental in putting together the Vestas 11th Hour Racing campaign. Having competed in the previous Volvo Ocean Race aboard Team Alvimedica, Towill had no doubt who he would be calling upon again for kitting out the crew this time around. ‘It's quite simple really. It's the toughest sailing event in the world, and you want to be using the best gear out in the market, and Musto's got the best gear. This race has been a lot windier than the last Volvo, and both Southern Ocean legs were quite windy; the leg from Cape Town to Melbourne, we had an average boatspeed of over 25 knots for the 14 or 15 days that we were out there. So it was really windy, big waves and not a lot of sleep.


Musto trials and tests its new product innovations with the assistance of some of the world’s best offshore sailors. Musto focuses on the importance of delivering performance in all areas, not focusing on just one, but delivering a premium, proven product that covers:

The GORE Micro Grid Backer, laminated to the Gore-Tex membrane, has been especially chosen due to its superior performance in the areas of breathability and comfort. In the three-layer system, there is always space between the layers to allow the warm air to circulate and, as the outer shell fits much flatter and smoother to the body, it is less likely to snag and easier to pull on and off

‘You’re in your clothes for a long, long time. Gore-Tex and Musto have been working together for a long time and that was one of the big reasons we chose to go with Musto. I am certainly not a technical person, so I can't tell you exactly how Gore-Tex works, but I do know that it keeps me dry and that's really all need to know. I understand that as it is used in constructing garments, it needs to be in the middle so that moisture can breathe through the garment, and it's basically the first thing we look at when we are trying to pick the gear that we’re going to wear out there. You need to know that you are going to be kept dry and Musto Gore-Tex is really the only product that we really trust.’

Strangely for one of the most experienced professional sailors in the industry, this has been Pete Cumming’s first foray into the Volvo Ocean Race. He came in late too, only joining Sun Hung Kai Scallywag at the stopover in Brazil. ‘It was great to join a team that had changed to Musto HPX (after starting the race with another brand of technical clothing) for their offshore gear. The big thing for me is that because it is a known quantity, I can be confident that I'll be able to put the kit on and I know it'll work. So for me to see the HPX hanging on peg on the container was a reassuring moment.

‘One of the big challenges at sea is you are trying to make sure you don't have any open sores or wounds because after you’ve been at sea for 18 days, over time you will get problems. When you get a bit of water ingress that can make those problems worse. It’s not unusual to get sores around your neck, where a little bit of water going down the neck gets into your base layer, the salt crystalises and it gets rough and when you are not taking your top off for weeks on end, that salt crystal drying out just rubs your neck and it's abrasive. I’m happy to say though, that on Sun Hung Kai Scallywag, everyone was in good form and the Musto kit preserved us well.’