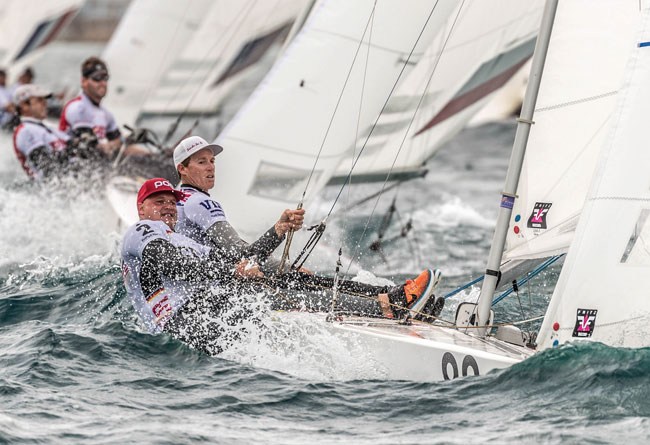 In a very few years the Star Sailors League is well on its way to being the pre-eminent forum for identifying who is the ‘best’ sailor of them all...

Annually The Star Sailors League seeks to determine who is the most talented sailor in the world. Is it an Olympic legend like Robert Scheidt or Torben Grael? Or a contemporary Olympian like Ben Saxton or Šime Fantela? Is it an America’s Cup legend like Paul Cayard? A Volvo Ocean Race/Route du Rhum winner like Franck Cammas? Or the Moth world champion?

The question has been answered in December each year since 2013 at the Star Sailors League Finals. In 2017 it was turn of British Beijing 2008 Olympic Laser gold medallist and reigning Moth world champion Paul Goodison to come out on top, sailing with German former Olympic Star crew Frithjof ‘Frida’ Kleen.

Of course the major hurdle in determining the world’s best sailor is that sailing is one of the most diverse of all sports, requiring a wide array of fundamentally differing skills, whether it’s the Vendée Globe, the America’s Cup or the Laser class at the Olympic Games. For example, it is unlikely Goodison- Kleen would have won last year if the Star Sailors League Finals had been held in 60ft trimarans. Our money would have been on Franck Cammas or Loïck Peyron.

So in creating a playing field not too slanted towards any specialists’ choice of boat is vital. A fully crewed boat would place too much emphasis on the crew rather than an individual sailor. Equally a singlehander would overly favour the sailors experienced in these kinds of boats. Thus a two-handed boat was felt ideal to test the skills of the helm while creating a level playing field, and a keelboat preferable to a dinghy since it was more representative of the bulk of our sport.

One of the reasons for deciding upon the Star boat as the chosen vessel of the Star Sailors League was due to its refined crew weight optimisation system, catering for helms of different weights. To prevent the inevitable drive towards ever smaller helms and larger crews the Star class has a sliding scale of permitted crew weights: a 64kg 470 helm can sail with a man mountain crew weighing 124kg; a 100kg helm can sail with a 100kg crew; a 140kg man mountain helm can have a tiny 73.3kg crew. You will notice that the heavier the helm, the higher the combined crew weight but the lighter the weight of the hiking crew.

In December’s finals it meant lighter sailors like Franck Cammas and Ben Saxton could team up with the heaviest crew – Mark Strube and Steve Mitchell respectively – and be competitive with the likes of Xavier Rohart, who was heavier than his crew Pierre-Alexis Ponsot. 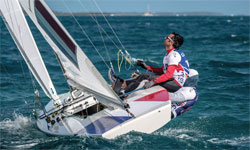 With each edition of the SLL the range of talent and background widens as a carefully developed plan to identify a true ‘Sailing Champion of the World’ evolves. Past Star World Champion Paul Cayard is seen (below) competing in Nassau with Phil Trinter, while ocean racing ‘god’ Franck Cammas (above) has been neatly paired up with the hugely experienced Star frontman Mark Strube

Paul Cayard explains why the former Olympic keelboat is the ideal choice of boat for the Star Sailors League: ‘It is uniquely qualified for this purpose: a Laser sailor at 78kg can compete on an even footing with a Finn or Star sailor at 100kg due to the total crew weight limit. The Star is a very technical boat but still sails like a dinghy. With no rule 42 limits on rocking and pumping of the sails it provides a strenuous workout a 100 per cent of the time.’

One of the lightest at the Star Sailors League recently was Croatia’s Šime Fantela. He competed in the finals in 2016, fresh from winning 470 Olympic gold in Rio. At that point he was a spindly 68kg and was racing with former Star Olympic crew Antonio Arapovic. As Fantela recalls, ‘He was around 105kg but we needed him to be 130!’

But in the Star boat the crew does substantially more than having a large derriere and hiking. Newbie Star sailors must rely on their crews to make up for their knowledge deficit.

Goodison describes the value of his crew, Frithjof Kleen: ‘Star sailors for sure have a big advantage. They know the boat a lot better and are very hard to beat. I am very fortunate that I have a very good crew who has been to the Games and who knows the boat very well. Frida has a good feel for the numbers, which makes a big difference. Good helms do a lot from the back, but beginners like me have to rely on the crew: if I feel a bit helmed up he decides how much we drop the rake back. You give him input and then he makes the decisions about the rig.’

With the hiking and technical aspects of the former Olympic keelboat in the hands of the crew, Goodison says helming the Star is very much like other boats to which he’s more used. ‘Downwind it is very much like sailing a Laser was in the old days, just the rocking and steering. I am simply not quite as strong as some of the big guys like Xavier Rohart, who is 110kg and can pump harder than a 79kg little guy like me, who doesn’t have the training.’

In fact, Goodison’s victory in Nassau was the first occasion the finals were won by someone other than one of the class’s many Olympic legends. Torben Grael explained why: ‘Star sailors do have some advantage but it would be very different if the class was still Olympic, because then the level would be much higher. But as people are sailing at a different level now it is not so difficult to get up to speed and race well.’

Ben Saxton was new to the Star, having come from representing Britain at Rio 2016 in the Nacra 16 in which he is current world champion. He was sailing with experienced Star crew Steve Mitchell. Of the challenges sailing the Star the 27-year-old flying Nacra sailor explains: ‘Boat handling was hardest. The most surprising thing was how to get the mainsail in at the leeward mark, because there was so much mainsheet, and how to gybe – again manoeuvring the main because it was so loaded. Upwind the boat was fantastic, because it was so tweaky. It gave you so much feedback that after a day or so we were almost up to pace. We were excited to be up with absolute heroes of the sport.’

Yes, there are a number of more modern two-man keelboats. Some even have a spinnaker. But even though the Star is no longer Olympic it remains a prolific international class with a formidable fan base that includes a lot of the world’s yacht racing elite. Experienced crews can eliminate all-up weight differences plus any disparity in technical understanding of the set-up, the ultimate tweakable rig, the unique sailing techniques and handling quirks of a boat with such a dramatic chine – leaving the helm free to have all the right qualities tested.

At the Bacardi Cup this spring Iain Percy stepped back into the Star for the first time since London 2012 and for the first time since the death of his Star crew and best friend Andrew Simpson. He is still a great fan of the boat – luckily, as he owns three… ‘I think the Star epitomises everything that is good in sailing. The fact that the Star Sailors League is in the Star is important because it is such a levelling boat.

‘It tests you in so many different ways. It hits all of the aspects of the sport that I find interesting. It is a hard boat to sail – you have to be fit and strong and work hard. The technique of steering is huge and the tactics of the racing are so close because everyone can be fast. It is such a complex boat it engrosses your brain and really pulls you in to the extent that sometimes the new guy can come along and win first time – as we saw with Paul and Frithjof in the finals. It has really caught the imagination of the top sailors. It is the one boat that can bring “the stars of our sport” together, which is important. The Star Sailors League has been a breath of fresh air in sailing.’

Getting Paul Goodison up to speed
– Frithjof Kleen
As a crew if you sail with a VIP you have to make sure that the boat is always set up very well and he just has to helm and trim the main. He has the feel and can communicate if there is too much load or not enough load and then you can power it up or depower it. If you sail with your normal helm as a crew you are more laidback with the trimming and tuning and normally that is the helmsman’s job. Here it is the other way around. On Lake Garda we prepared with the manoeuvres so we were sure they were OK. Then it was just coming here and getting the boat set up.

Big shock to the system… Nacra 17 to ‘ancient’ Star boat?
– Ben Saxton
The Star was completely different from my Nacra 17… pretty obvious really! But I loved it and I thrive on the challenge of sailing something new because I had never set foot on a Star until I was in the Bahamas. After the last race, when we were sailing in Steve [Mitchell] was saying, ‘This is your one-week anniversary in a Star.’ That made me smile because it felt like we had come a long way. I tried to approach it as learning fast. I definitely had a good coach and crew in Steve. It was just amazing. I approached it with the belief that we could do well but the awareness that we could be lacking in certain areas.