(Please) don’t mess me around 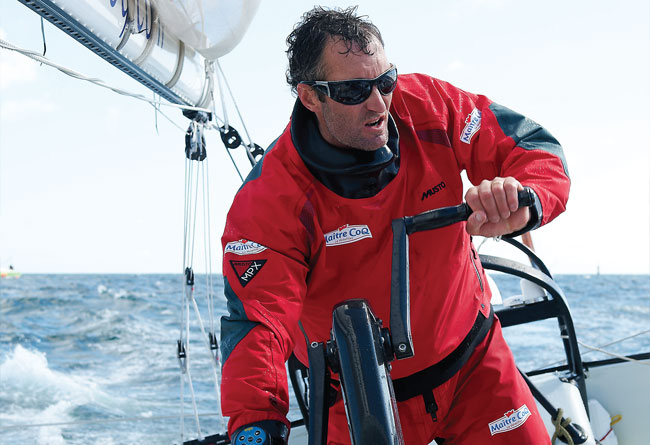 ‘When you’ve absolutely, positively got to stay dry and warm, accept no substitutes. Musto HPX is the very best there is.’ So might that straight-shooting film star Samuel L Jackson say if he were to play an offshore sailor in a movie. And he’d be right, except Musto’s MPX range does a pretty good job too. MPX is one substitute that even Vendée Globe and Volvo Ocean Race veteran Sam Davies accepts, and in some cases prefers. ‘HPX is bulletproof. But when you’re singlehanded sailing in particular, there’s a lot of up and down the stairs,’ says Davies, whose CV includes three circumnavigations and 24 transatlantic crossings. ‘MPX is more flexible, and still does an incredible job of keeping you warm and dry.’

Musto have worked closely with Gore-Tex for more than 20 years to develop the best possible offshore sailing kit. It has been a gradual, evolutionary process based on close relationships with top sailors such as Volvo Ocean Race skippers Sam Davies and Ian Walker, who are always very clear about what works in tough conditions, and where they believe improvements can be incorporated. While HPX is the flagship line in the Musto range, the more affordable MPX benefits from many HPX develop - ments a few years down the line.

The past 10 years have seen big advances with a collection that is every bit as waterproof and durable as previous generations, but with less bulk. The problem is, says Musto’s lead designer for sailing Shane Rhone, perceptions take a while longer to catch up with the new reality: ‘We responded to a demand for lighter garments that still deliver the highest levels of waterproofness and breathability. And we did that, and won some industry awards for innovation.’

So what was the problem? ‘Some of our distributors told us that when customers tried on the gear it felt so light it didn’t seem as if it was going to be as waterproof or as strong or durable – even though all our tests showed that actually it is more durable than ever before.’

Professional sailors who use the gear week in week out have got used to the fact that lighter garments can deliver all you want from the kit, but it might take longer for weekend recreational sailors to change their views.

Because Cumming has to wear whatever the team gear is for any given project in which he’s competing, he gets to wear a whole variety of gear. ‘There are some clothes out there that fit nicely. They’re all slim fitting, which is fine when you are walking down the street; it looks nice, all the curves in the right places, tight on your arms. Then when you go sailing the first time you bend over it rides up and rucks up. Or you can’t move and stretch to get something, then it gets to the point you just want to take it off and throw it away, because it’s pretty useless for its job on the water.’ 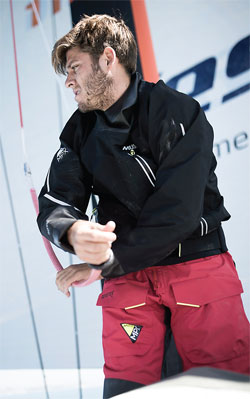 It’s a personal thing… Vestas bowman Tom Johnson (above) prefers the all-MPX combo rather than the MPX/HPX ‘blend’ of Beyou (main picture). For 2016 Vendée Globe winner Armel Le Cléac’h (MPX smock, below) the only thing that matters is finding a clothing solution that keeps as much of the ocean out as possible when you’re reaching at a steady 45kt on the Ultim foiler Banque Populaire IX (issue 458). While Beyou is filling in time racing on Dongfeng as his new Imoca Charal is being built, Le Cléac’h is busy crisscrossing the north Atlantic 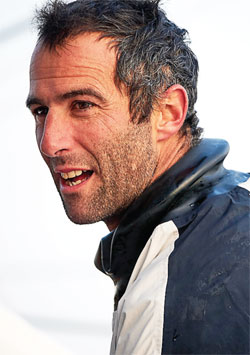 ‘Just things like if you’ve got snug-fitting rubber boots they will probably fit well on your feet, but you can’t kick them off easily; and when you are knackered the worst thing in the world is trying to get your boots off. Quite often you want to keep your boots on when you go below so you don’t get wet feet when you are inside the boat, so it’s making sure the leg openings are big enough to slide over the top of the boots.’

Ultimately Rhone and his designers will always pay more attention to what the sailors like Cumming want above all else. But he also wanted to take on the battle of the showroom where Musto are up against some kit where durability is forsaken in favour of appearance. ‘We wanted to address the fit for the new generation of MPX Offshore to create something more streamlined and less bulky. Our aim was to do all this without compromising our 3-Layer System,’ says Rhone. ‘So we have worked hard on the shaping around the shoulders and the arms while body-mapping seams and keeping their number to a minimum. Every seam adds weight and a potential point of weakness, so we’re very pleased with what we’ve achieved.’

Rhone echoes this: ‘When we develop kit that’s exactly what we do, we go back to the drawing board, reassess the needs and what’s not working. If we stick with cookie-cutter designs just because that’s how everyone else does it, we are failing as a brand, and I would be failing as a designer.’

Like Sam Davies, Cumming tends to favour HPX bottoms for taking all the knocks and scrapes of scrabbling around on deck, and an MPX top to provide that extra mobility for the shoulders and arms. ‘If your clothing is too stiff and heavy,’ says Davies, ‘it’s amazing how much extra energy you can expend in manoeuvres and when you’re grinding. The MPX still provides all of the waterproofness and durability in some pretty horrible conditions.’ Her additional tip is always to wear a base layer of Merino wool, even in warm conditions, because the wool is so good at wicking away the moisture from the body.

As to that perception that the latest edition of MPX might be too flimsy for purpose, Davies comments: ‘If Musto say it’s going to be good enough for the job I don’t have that question in my mind. I’ve worn Musto for so long I just trust it.’