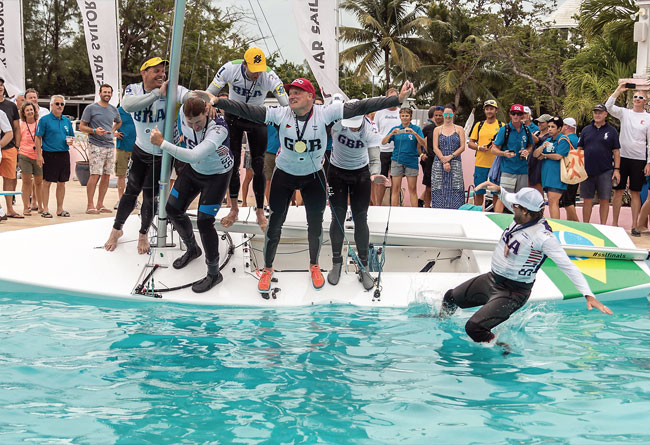 Who is the best sailor in the world? This is something that can be determined subjectively, as happens annually in the Rolex World Sailor of the Year awards. But would it ever be possible to calculate this mathematically? Obviously there are inherent problems in a sport as diverse as sailing.

How can you compare the achievements of an Olympic gold medallist with the helm or one of the crew who won the America’s Cup, Volvo Ocean Race, Vendée Globe, Moth Worlds, 52 Super Series, Melges 32 Worlds or the Solitaire du Figaro? This is not just like trying to compare apples and pears, but apples with watermelons, grapefruit or gooseberries.

Making the most concerted and sophisticated effort to date towards this goal is the Star Sailors League. The pinnacle event in their often misunderstood circuit that aims to determine not the best Star sailor, but the best star of sailing, is the Star Sailors League Finals. For the past five years this event has been held in December in Nassau. Here there are indeed many veterans of the Star Class; however, they also happen to be among the best sailors in the world.

Among last December’s line-up were three Volvo Ocean Racewinning skippers: Paul Cayard and Torben Grael, both Star veterans, and Franck Cammas, who is not. In addition, there were five Olympic gold medallists and between the 25 skippers and 25 crew competing there were a total of 47 world championship titles in Olympic classes alone (the high score going to Robert Scheidt with 12 world titles to his name).

Main picture: The latest Star Sailors League Finals in Nassau in November drew an extraordinary field covering the cream of the world’s best sailors from a range of disciplines stretching from round the world shorthanded record breakers to double foiler Moth World Champion – and eventual Sailors League Finals winner – Paul Goodison. The event lacked for nothing in immaculate organisation, along with continual competitor as well as spectator interest both when afloat and ashore… or sometimes both together

The Star Sailors League has been conceived with the aim of first determining, but also recognising and boosting the profile of the world’s best sailors. In addition to the finals, and the proposed four annual Grand Slam events, which in due course will feed into this, the backbone of the Star Sailors League is its Ranking.

The Ranking goes back to the very core concept of the Star Sailors League, which was set up based on the model of the Association of Tennis Professionals (ATP) Tour.

In the early 1970s tennis was in a state of chaos. National federations throughout the world were all-powerful, deciding which of their players competed in which event. The events too were in disarray, some allowing only pros, others only amateurs.

It was tedious so in 1971-72 they all got together for a discussion in Flushing Meadow. There they said, ‘Now we are together we will create the ATP, but to do that we need a ranking. We are all allowed to participate, it is open, but the ranking will decide who goes to Roland-Garros or to Wimbledon.’

That power now belonged to the players, thanks to their new ‘union’, was fully demonstrated when the pro tennis players boycotted Wimbledon in 1973 – a watershed moment in the history of professional tennis.

The Star Sailors League Ranking helps establish which sailors should be invited to their events. But, in addition, a meaningful ranking that is fair, reflective and easy to understand has multiple other benefits – helping to establish genuinely who are the best sailors, in turn helping to further the careers of professional sailors. It is also good news fodder for journalists, in a tried and tested format long established by other sports.

The Ranking established by the Star Sailors League obviously includes its own events but, importantly, other events, both major or otherwise, outside the League. At present it is still in its infancy, featuring principally results from the Star class, but this season results and points scored from Snipe, Finn and Soling events will be added to the Ranking and other classes are being invited to submit results from their events to be part of the Ranking too.

Even at this early stage the Ranking already has 2,500 sailors registered in its ‘system’. Given SSL’s aim of including all dinghies and small keelboat classes, and to do it globally, this monumental task starts to take on Human Genome Project proportions involving 10 Olympic classes, 143 World Sailing classes and 1,000+ non-World Sailing classes.

But while it may be early days in accumulating the data, thanks to borrowing from equivalent systems used in other sports, the Star Sailors League Ranking is already highly advanced in terms of its maths. At present it divides events into seven levels of category: for example, the winner of an U23 Finn World Championship would score 65 per cent of 2,500 points (ie 1,625 points).

Rather than allocating points only to the top 10 or top 25 finishers at each event, the Star Sailors League Ranking allocates points to everyone, right down to the crew in last place. Therefore, in addition to the above points allocations, the number of Ranking points a sailor scores at an event also has to be based on the number of each event’s participants.

It doesn’t end there either. The allocation of Ranking points also favours the best exponentially. So those who have performed best – specifically the top five, the top 10 and top 15 – all score substantially more than those who finished below this, for whom the Ranking points level out.

Fortunately, the Star Sailors League Ranking software is intelligent enough to calculate all this.

The Ranking system established by SSL (below), which started out grading Star results only, has now been extended to other classes in a bid to collate data to rank sailors across the board. Right: Paul Cayard, the 1998 Star World Champion who has sailed in the class more or less continuously since the late 1970s, has long been a fan of simplifying the sport for outsiders and has been an enthusiastic supporter of the League from the start 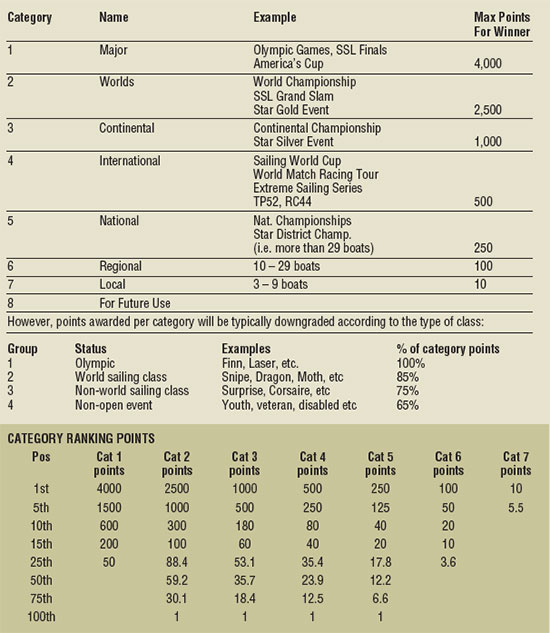 Significantly, a further refinement of the Ranking is that it does not continually accumulate points, which would favour sailors who competed in the most events. Instead, each sailor’s total score on the Star Sailors League Ranking is the sum of their six top-scoring events (in terms of ranking points). This does favour those who compete in more events, just not as directly.

The Ranking is rolling, so it doesn’t restart at the beginning of the year, for example, and is updated weekly. Event scores on the Ranking last for two years and drop to 50 per cent of their initial value in year two.

There are separate rankings for skippers and crew and there are even rules in place if skippers/crews change midway through an event.

Given not just the complexity of this, but also the sheer number of sailors who will ultimately end up in this database once more classes are added, it is understandable that the Star Sailors League is keen to bring onboard a company like SAP to assist in the data acquisition and number crunching.

From there it would be a small step to add yacht racing. The Ranking has started with small boats, the Star Sailors League argue, principally because this is the area of the sport practised by the highest number of participants and yet these sailors typically receive the least amount of attention because they lack the substantial marketing budgets of high-profile America’s Cup or Volvo Ocean Race campaigns.

A fair, accurate and meaningful ranking would definitely serve to make sailing more understandable to the public. It is argued that sailing’s diversity is also its downfall. By having more than 100 world championships annually, the sport lacks focus. The Star Sailors League Ranking aims to rectify this as well as being highly beneficial to the athletes themselves, creating a reliable benchmark by which to compare themselves with their peers, as well as their own personal performance year on year, in turn encouraging them to improve.

If there is an entity likely to succeed in making all this happen it is the Star Sailors League.