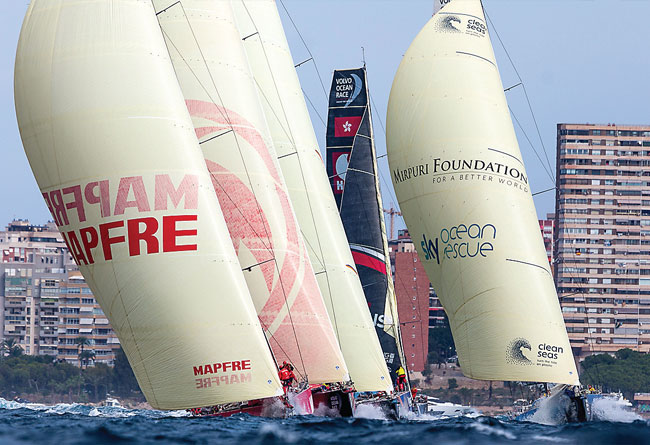 Building on its success with 3Di across grand prix, offshore and superyacht fleets, North Sails has launched a new variant tailored specifically for downwind applications. For the Volvo Ocean Race 2011-12 sail limits on the outrageous VO70s were tightened down following the previous event from 24 to 17 sails for the whole race. North’s immediate focus was to try to figure out if any sails could be removed from the previous inventory without negatively affecting performance over the length of the course. 3Di was a new technology back then, and the bet was taken by both North Sails and some of the teams that it would perform better, and for more hours than string sails, therefore allowing fewer sails to be carried onboard.

Main picture: Away at last…
Mapfre leads this year’s seven-boat Volvo Ocean Race fleet across the startline in Alicante. An increasingly popular application of 3Di Force can be seen here in the one design A3 in this year’s VO65 sail inventory. Shaped like an asymmetric spinnaker, the latest VO65 A3 is in fact built like an upwind headsail and furls like a genoa. It is currently the lightest application of North 3Di Force technology. For such a powerful masthead sail in use on a 65-foot raceboat the sails that are seen here weigh in at just 80kg…

Gautier Sergent, lead sail designer, had felt that in heavy-air downwind crews tended to back off to avoid breaking the boat – and the sailors. So if there was a sail that could be removed from the replacement cycle through less wear and tear, it might be the heavy-air downwind fractional Code 0 – as long as weight did not have to be added to make it bulletproof. Hence it was decided to develop a new fractional Code 0 that could last the whole race, while being light, fast and stable enough to reach at higher angles than the previous sail; the 3Di Force concept was born. This sail type not only went around the world on Groupama without any problems, it ended up becoming quite famous… as the team approached Lorient on the race’s epic penultimate leg.

With the wind blowing 48-50kt, it was time to gybe for the finish. The Groupama crew decided to gybe with everything up, focusing their attention on the mainsail to ensure they did not break all their battens… or drop the mast. So the fractional Code 0 would have to survive this manoeuvre while being attended to last, left to flog in the howling conditions before being sheeted back in. The crew pulled it off, the sail survived. And they went on to win the leg and the race.

Similar on the outside… inside it’s a whole different story
The 3Di layout spreads filament pre-peg tapes in a multiplicity of orientations which enables a downwind sail to be engineered with high precision, and without the weight of the film required for a Mylar-based string sail. 3Di manufacture is also a vertically integrated process, North Sails controlling everything down to the tape manufacture. This allows the company to tailor materials for applications and opens up an infinite number of fibre combinations in terms of type, dpi and adhesive content/type.

This is what allows Force to be completely different from 3Di Raw. 3Di Force was designed from the outset for downwind applications, so loadings are quite different from the upwind case and more biased towards the luff than the leech. The AWS is typically much lower downwind and the sails much larger than upwind sails, so the weight becomes a greater factor in ensuring the sail flies correctly.

The loading is also more dynamic because of the broader angles and faster AWA changes as the boat accelerates/slows. This requires a high strength-to-weight ratio: the ability for a sail to sustain high loads for a given weight.

The sails are deeper than upwind sails as well, so the weight-tomodulus ratio (the ability of a sail to resist stretch for a given weight) can be slightly moderated. In fibre terms this typically means significantly more Dyneema than would be used in an upwind sail.

Combining those two factors – a luff-loaded structure and high Dyneema content – is a great solution for a light but durable downwind sail, while retaining the flying stability of 3Di. 3Di Force employs North’s proprietary 3D moulding technology with its precise control over shape, combined with the high-resolution

Why did it take North so long to release 3Di Force to the general market? Mainly because its application was limited due to the minimum weight of a 3Di sail at the time. Later, in 2013, North invented 3Di Raw, which reduced the minimum achievable weight without compromising the sail structure. Today 3Di Force has become the benchmark for downwind sails on fast boats. It is light, strong, very precisely shaped and more stable than other technologies. Sailors commonly highlight improvements in acceleration detected with sails built in 3Di Force; a big reason for this responsive performance is that the unmatched stability of these sails means better use of gusts, translating the extra power into speed. It also shares the attribute of every 3Di sail and increases the sweet spot/effective wind range of the sail, thereby reducing the number of sails needed.

From Imoca 60s to Ultimes, boats are doing away with panelled downwind sails completely. The 3Di Force fractional Code 0 is also a great addition to the armoury when reaching with AWA ranging from as close as 45° upwards…