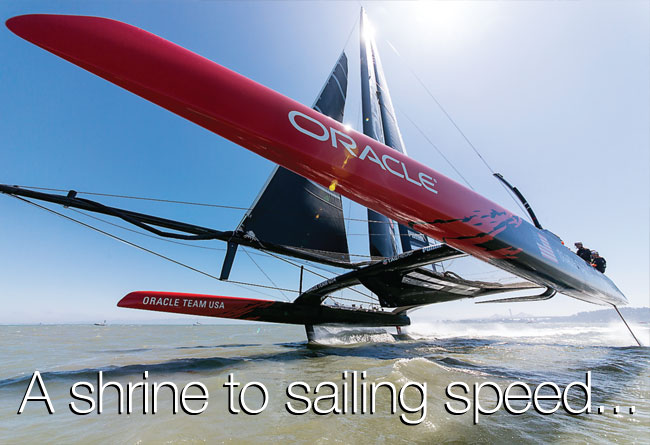 Team Oracle have agreed to donate their 34th America’s Cup-winning 72ft catamaran USA-17 to The Mariners’ Museum and Park in Newport News, Virginia. After months of careful planning, the massive carbon fibre craft is now on display in the main exhibition hall. Raised up to tower over visitors, this new central feature provides a visually powerful symbol of how far sailing took technology-driven innovation in pursuit of one of the oldest trophies in the sporting world. And that was nearly four years ago!

Not surprisingly, many readers of Seahorse will not have heard of, nor visited, The Mariners’ Museum and Park, yet it is one of the largest maritime museums in the world, with nearly 10,000m2 of exhibition galleries and 32,000 objects in its collection. The Mariners’ Museum Library and Archives are home to over 78,000 books, 800,000 photographs, films and negatives, and over one million pieces of archival material, making it the largest maritime library in the western hemisphere.

Oracle’s 2013 America’s Cup defender USA-17 is not the easiest of exhibits to fit in a museum but the Mariners’ Museum in the legendary naval port of Newport News is not your average exhibition space. That said, USA-17 is not being displayed with her giant wing aloft and in situ… that really would have been too big an ask for any inside space – outside perhaps of the similarly legendary rocket assembly building at Cape Canaveral! But maybe when that building is finally retired it too can be moved to the Mariners’ Museum to accommodate the flood of similarly ‘tall’ wing rig race boats that we can expect to see launched during the next few years. Just thinking ahead, folks… 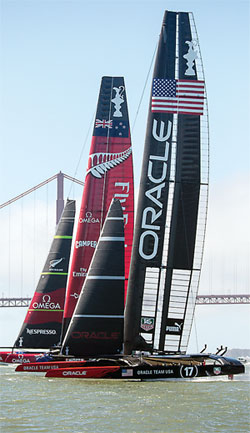 Situated in the beautiful tidewater country of the lower Chesapeake Bay in Newport News, Virginia, its location is not in one of the usual centres of performance sailing in the US. Yet the latest addition to their collection may now inspire a new wave of visitors to put the museum and park on their itinerary. Perhaps more importantly, the new display will also help educate and inspire thousands of non-sailing visitors on how high technology has influenced a sport that does not get much public exposure in the US.

Even if the long historical lore of the America’s Cup is not well known to non-sailing visitors, this new exhibit will go a long way towards changing that, given the abundance of patriotic symbols, the compelling comeback story of the 34th edition, and the enormous size and impression made by the yacht. While the giant wing and its elements are not part of the exhibition, due to size constraints, and many of the onboard systems were stripped out for use in the preparation of this edition of the race, the exhibition will explain the hydrodynamic and aerodynamic forces harnessed in the design of the hull, appendage, wing and control systems to propel AC72 class cats at then unprecedented speeds… and heights above San Francisco Bay.

Once opened to the public on 27 May, the Speed and Innovation in the America’s Cup exhibition will deliver this message through a well-described collection of scale models, photos, videos, educational displays and other interactive means to demonstrate how this enormous craft could lift free of the water and still be controllable and manoeuvrable at speeds of 50kt+.

‘This is the largest addition we have ever made to our collection, and it’s tremendously exciting to have this enormous craft become a focal point in the museum,’ said Lyles Forbes, vice-president of collections and chief curator.

‘Our mission is to connect people to the world’s waters, where our shared maritime heritage connects us all to each other, a message that is all the more important to convey in these fractious times. Being at the forefront of performance sailing, the America’s Cup fits perfectly into this narrative, and we’re extremely pleased to have the opportunity to take this message to our visitors and all enthusiasts.’

Among a rich, varied collection that chronicles all aspects of life on or close to the sea, USA-17 is not the museum’s only exhibit to highlight the cutting edge of performance sailing technology: a collection featuring a pre-foiling dinghy from 1933 (sic) routinely attracts a dedicated audience, who have been pursuing innovation and speed at a much more modest scale.

And for aficionados of the art and science of sailing foilers there is the museum’s well-known chronicling of the foiling experiments funded by the US Navy that culminated in the famous Meteor foiler in the mid-1950s (issue 447) on display.

In all, this new and impressive display of America’s Cup technology at The Mariners’ Museum and Park will surely now shift the centre of gravity of the genre just a little bit further south… from Newport, Rhode Island to Newport News, Virginia.

Click here for more information on The Mariners’ Museum and Park »