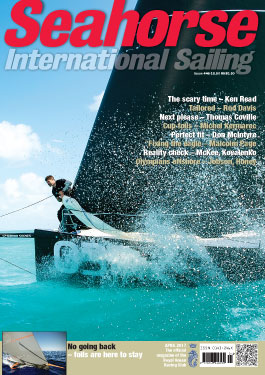 A complex subject – Part I
The connected issues of coaching, RIBs and independence finally get the airing they deserve. JONATHAN MCKEE, VICTOR KOVALENKO and ROB KOTHE

View from the top
An interview Hendrik Brandis, ClubSwan 50 Earlybird

(Noteworthy) trickledown
While as a sport sailing is not sinking beneath the waves under the weight of technological or indeed other broader benefits being spun off from the most specialised America’s Cup that has ever taken place, there is one company whose enthusiasm first for delivering innovative – and reliable – AC technology and then developing it for mainstream consumption remains undimmed

Zero tolerance
Already famous for the high precision of both their tooling and the boats they deliver, Persico Marine have been busy meeting two diverse but similar challenges. Having confounded the naysayers by rebuilding the destroyed VO65 Vestas to good-as-new condition in a very short space of time, the Italian yard has most recently been tackling the demands of building super-critical ACC hull parts for the Land Rover BAR America’s Cup team, their even more critical foils… and all while at the same time completing a brand new VO65 for Akzo Nobel’s Volvo Ocean Race entry

ORC column – A brave new Worlds
The event horizon is changing. Plus things that go splash in the night… DOBBS DAVIS

Design – Visible elements of modernity
The Figaro3 brings with it a completely new approach to the concept of the foil-assisted monohull. JOCELYN BLERIOT talks with designer VINCENT LAURIOT-PREVOST and with builder GIANGUIDO GIROTTI

RORC – Caribbean speeding
And the Phaedo is no longer having things all her own way. EDDIE WARDEN-OWEN