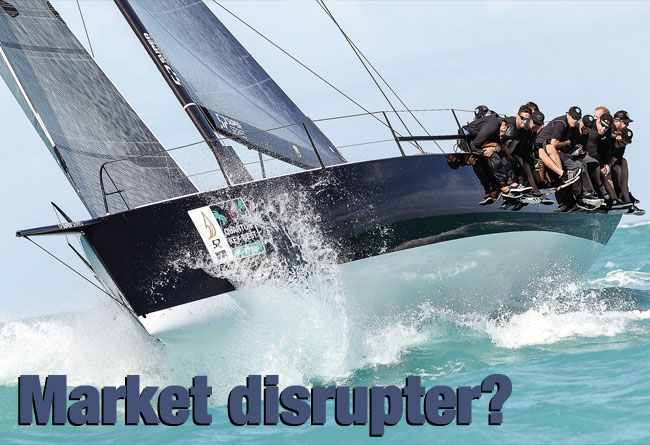 Five days of racing in perfect Key West conditions made it clear that in 2017 we are in for a tough battle for all three spots on the podium. After 10 races it was Quantum Racing who in light conditions sailed near-faultlessly through the final two days (2,1,1) to come back from being well off the podium and take their first win from a pack of six boats that were all still in contention for second on the final run of the final race. The less consistent teams made up positions 8 to 11 but all showed potential. Sled with a 2nd and 3rd, Gladiator with a 1st, Alegre with a 3rd and 4th and we all applauded Paprec for their first and certainly well-deserved race win since joining the 52 Super Series.

With a bit of breeze, say from 9kt, this year as yet there is no visible performance spread between the boats. Where last year one could still see differences upwind now these are gone. If anything you sometimes see boats show good downwind speed. One of these is Rán, over the years always strong downwind, so I tend to credit helm and crew for that. Boats going faster or slower downwind than previously can often be related to changes made to the keel fin. These changes are nearly always primarily made to achieve better characteristics upwind and then unavoidably show up downwind. Of course sail design plays a role too but this is hard to quantify for the outside observer.

In Key West all eyes were on Interlodge, the new Botín Partners-designed boat. No doubt she is fast and it looks like she might be too fast to ignore in the sense that it might prove hard to optimise the 2015 boats to get to her potential once she is sorted out.

This is crucial. If true it will trigger building new later this year rather than further optimisation. To build new for the 2018 season one has to start designing no later than July, possibly August. So three more events to assess the true strength of Interlodge.

Part of her performance progress will be equipment, mainly the rig. But what is in the design that can possibly be hard to incorporate in the existing boats? Sure, her rig is a little further aft in the boat, around 7 or 8cm. But with J fixed in the TP52 box rule, as is IG, P, BAS, ISP, and even a minimum on E, there isn’t much more you can do than move the lot. With it, of course, the keel will move, at least the fin will. Stern treatment never seems at its optimum – in combination with hull volume distribution and hull rocker I guess that is a substantial part of the puzzle. 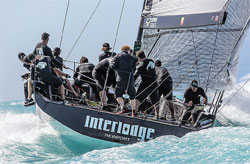 Above and below: Volvo race winner Ian Walker steered the new Botín design Interlodge to 7th overall in Key West – but won two races and finished up just 2pt off 2nd… The Botín office is benefiting from some much improved in-house aero tools, something that is much more evident on their new Maxi Cannonball (Issue 444). In Florida Interlodge duly proved to have a very small but already identifiable upwind edge with no obvious cost downwind. Right after Key West Interlodge was sold and now becomes Gladiator 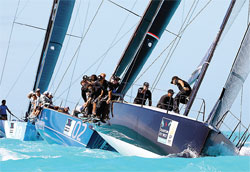 The 12th generation, their 2015 boats, compared to the Vrolijk boats, are at their strongest in light and lower medium upwind conditions. The aim will have been to improve upwind in more breeze without giving away in the lighter stuff, whether up or down. It looks as if this has led to a rethinking of hull volume distribution and appendage sizing and positioning. More clearly visible are some quite radical efforts to further improve the deck aerodynamics. Ever since Emirates Team New Zealand’s Botín TP52 of 2009 this designer’s trademark bulbous deck has been further refined in search of both hull stiffness and clean airflow into the sails.

Slowly we see that optimising for extremely close fleet racing in a way forces you to ‘over-specialise’ the hulls towards the conditions they will mostly race in, so medium breezes, let’s say 9-16kt of wind. This invites a focus on less rocker than one would aim for when designing a more all-round boat or a more offshore-oriented boat.

Both in the very light and in strong breeze a little more rocker will help. To have less drag or to lift the bow. Is moving the rig aft motivated by this? Just thinking while typing…

The modern TP52 has become somewhat more of a wave-piercer than its predecessors. Will it therefore be possible to design a better 52-sized IRC boat if not controlled by the box rule? In theory of course, yes, but in practice I feel too much choice might kill you. Imagine not being constrained by E, P, J and IG. How many variables can you play with, each with its consequences in sail and rig design in an endless spiral of experimentation.

Not being restricted by the box rule will allow you to bring more sail area higher up, where we find more breeze. As predicted by a handful of sail designers, increasing the head of the mainsail (Mainsail Top Width) has had a turbo effect on the TP52s far beyond what can be explained by just the area increase. Not just in the light to medium stuff but at any wind strength.

IRC boats tend to be modest in increasing top width as it gets rated pretty heavily if related to sail area only, but more and more designers realise that while IRC is doing a good job here quite likely the big head is simply still king.

Lowering the boom adds sail area but you have to wonder about its efficiency versus rating. Not just a headache for the number crunchers but surely one if your head gets in the way of the boom sweeping across.

Will adding even more mainsail top width still make it a better boat? I guess it will. How much? Do not be too shy, I reckon. Of course expert advice shall be sought. Then again I already know who is going to give me the biggest number and who will be modest. Knowing your advisors can come close to real knowledge.

So 2017 for the decision makers is not just about focusing on the racing. Once ashore time will be spent on the new boat decision. This creates a different vibe – if you wish it adds a vibe. In itself it is amazing how one boat can turn the tide so quickly. The results of Interlodge in Key West do not show her potential. Just those racing in the 52 Super Series Key West event must have spotted something.

Add to the mix that unfortunately her owner, Austin Fragomen, got injured just before Interlodge was completed and as recovery will take some time decided to sell rather than to mothball the boat. And that it did not take much time for her to be picked up and become the new Gladiator.

May she bring fun and good racing to her new owner. All eyes will be upon her as if she is the Christmas star. How bright her light will be we will know in six months’ time…
Rob Weiland, TP52 and Maxi72 class manager