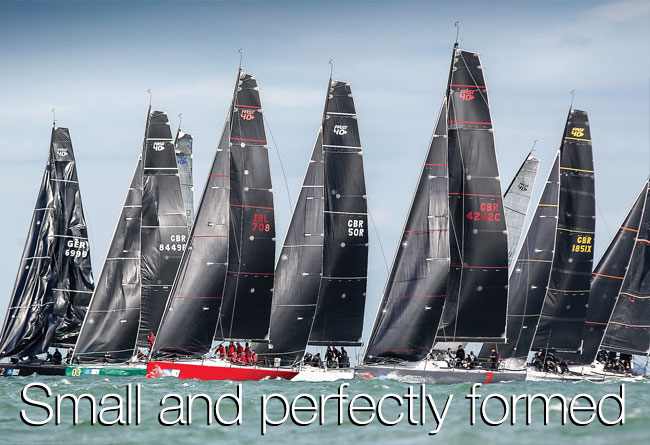 Many of the most elegant developments in composite racing equipment historically emerge from the fastest small boat classes. A relatively young UK group of carbon specialists are currently showing how it’s done…

As the development of modern dinghies and yachts continues to progress so sailing speeds increase and fleets become tighter. Gains are harder to find but arguably more important. As well as reducing hull weights, increasing righting moments and improving foils, another big chunk of performance gain has been achieved through rigs and sails. An area that has been ignored, until recently, has been the sail batten. This is probably due to the small gains available vs larger speed gains available elsewhere, but every small gain is now critical.

Main picture: The mainsails used on Fast40s all now feature large square tops with a substantial roach. The already intense competition in this fleet demands that little mercy is shown in terms of sail fatigue when the contest dictates. It took just two years for this fast-evolving fleet to be approaching levels of refinement rarely seen today outside the TP52 and Maxi 72 classes

Moth rigs have evolved a lot over the past 5 years as upwind speeds increase while the need for power downwind is always there. Given the limited sail area on a Moth, 8.25m2, there is a big trade-off between upwind and offwind performance. High upwind speeds produce high AWS numbers, resulting in a very overpowered boat that requires depowering quickly. But turn the corner and maximum horsepower is needed to go low and fast.

Membrane sails are now produced with almost zero broadseam (panel shaping) and only luff round. We then rely on the battens to do most of the work of pushing the sail shape and camber into the desired position. The biggest gains we have made over the past year have been through carefully working with each batten individually, adjusting stiffness and taper position, to achieve the flying shape we want.

Ultimately a shape compromise has to be made downwind vs upwind. Sails have all been driven towards upwind shapes, though on a stiff rig the high luff round allows them to gain depth once controls are eased.

Tapers in Moth battens have been pushed forward to allow the batten to hold straight in the exit which in turn holds the sail straight, keeping the leech as flat as possible. As we move up the sail the battens generally get softer and the taper moves aft – this is all to help the sail round up when controls are loosened downwind.

Customised Composites have led the way with this development, working with sailmakers and sailors to provide a reliable, light product to the specification that we need to deliver all-round speed.

We have also seen ‘trickle-up’ in 2016 with our Fast40+ Invictus using a set of carbon battens from the company. The top three battens of a Fast40 main get plenty of impact and odd loadings with the runners, especially in the pre-start. The battens have proved reliable and incredibly light compared to carbon battens of the same stiffness from other sources.
Rob Greenhalgh

Customised Composites
The team at Customised Composites have been working with the best racing teams around the world to develop a range of carbon sail hardware that is not only durable, but also tailored to specific class and sail design requirements. The idea of a batten is a slight paradox – few other products require a predetermined, controlled stiffness, while being as flexible as possible in order to ‘pop’ or tack under load. 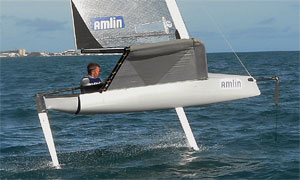 Above: Originally created for and then tested to destruction in the Moth class (above), these tiny 10mm carbon battens not only support the leech of the sail in the normal way but also have the additional task (below) of forcing shape into the sail itself using the luff cam system that was first developed for windsurfing. Note too the canting rudder gantry on Rob Greenhalgh’s boat (above). Sail depths in the class are increasing and with that so does the challenge of building a batten that is stiff enough to be fast but flexible enough to be tacked quite easily 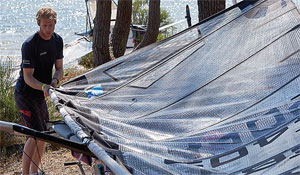 It is a commonly held view that carbon battens, and other sail hardware, are easily broken and generally chosen for aesthetics; this was indeed true in some early products. But, with improvements in materials and manufacturing, it is no longer the case – in classes such as the Moth it is now simply not possible to achieve today’s optimal sail shape without the use of specialised carbon battens.

Our work with Moth battens has led to many wider developments. We now produce a range of battens that feature very aggressive tapers over a short distance along the batten. This allowed us to control and develop the stiffness of specific parts of the battens, permitting draught position and the amount of shape in any part of the sail to be accurately controlled. With these battens we can effectively position the shape of sail however the sailor wishes, tailoring it for different wind strengths and sailing conditions.

Most sail designers will specify batten stiffness using an EI formula, where E is the Young’s Modulus of the material used and I represents the moment of inertia of the shape being examined. Current Moth sails require an EI of 10-15 to support the leech of the sail, from a 10mm wide batten. This cannot be achieved using glass battens without making a batten that is thicker than it is wide, so causing the batten to try to rotate within the pocket; such glass battens are also significantly heavier, not ideal in a boat that is trying to fly.

Due to the fixed foils all the modern Moths are launched in a capsized state, which as the boat enters the surf can, if not controlled correctly, be very destructive on the sail hardware. Some manufacturers continue to produce carbon battens using outdated resin systems, which in turn produce a batten with a relatively low E value and a structure that does not offer a particularly good bend radius.

We have experimented with a number of resin systems and manufacturing techniques before settling on our current solution, which allows the front end of our carbon battens to be bent through almost 180° without failure. We manufacture our battens from HTS pre-preg carbon-fibre unidirectional fabrics, achieving the desired engineering properties and physical dimensions through careful control of the shape and thickness of each individual ply, rather than machining down to the desired thicknesses post-cure. This method allows us to retain continuous fibres on the outside of either side of the batten, helping to prevent splintering and splitting through continued flexing and maximising durability compared with a typical machined product.

Our laminates are cured at around 150° under 5 bar of pressure to ensure a consistent void-free final product. This overall improvement in laminate quality has led to huge improvements in the bending characteristics. This is measured as a bend radius – the smaller the radius the batten can bend around without failing the better. We found in testing that we can improve the bend radius by around 20% through improvements in manufacturing techniques. The past two seasons in the Solent have witnessed the explosion of the Fast 40+ fleet – light, stripped-out racing boats all of which sport long (3m draught) keels with large bulbs and lightweight rigs. These exciting boats are most easily described as a smaller TP52, though they can deliver relatively higher performance.

The formula has produced a growing number of 40-42ft racing boats that are very fast upwind and can plane downwind at 25kt or more.

With the development of this type of yacht has come the requirement for higher aspect ratio rig design with large roached jibs and mainsails. This has generated an additional challenge for the sail hardware as the interaction with running rigging becomes far more dynamic.

All of the development work we have been carrying out in the dinghy classes has been translated directly into the Fast 40+ fleet and the battens we first developed for Invictus, who won the final round of the season using our latest battens. These were developed to match the EI and the bend characteristics of the current glass battens while reducing the weight of the sail. Today’s Fast 40+ mainsail designs require four full-length top battens to support the large roach and deliver the desired shape. The three lower battens are very simple, but the top long battens have taken experimentation, trying different taper ratios and stiffnesses to identify the optimum solution.

Invictus is now using a full set of our carbon battens and we have been able to save 2kg from the top four battens alone; on a 10m lever that is a significant amount of free extra righting moment. To get the full benefit of a modern sail you require a similarly modern batten to support it. Are we not now at the point where carbon battens and other hardware such as headboards and clew plates should be standard fitment on any serious raceboat?