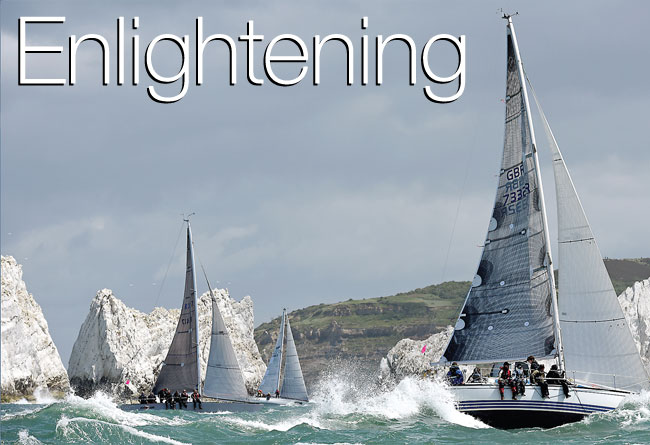 A moving day out. RICHARD ASPLAND

The 2016 JP Morgan Round the Island Race had a few landmark narratives running through a windy and grey Saturday in July.

JP Morgan Asset Management were in the final year of sponsoring the race. Phaedo3 smashed the multihull race record taking 22 minutes off Sir Ben Ainslie’s previous best. Prince Harry joined the crew of the Fast40+ Invictus and only narrowly missed out on the coveted Gold Roman Bowl. And, on a personal note, it was my own first ever sailing race.

I was lucky enough to join the crew of Omerta, a Jeanneau Sun Odyssey 45, and one of the five boats that the Ellen MacArthur Cancer Trust entered into the race. The Ellen MacArthur Trust takes young people aged between eight and 24 sailing to help them regain their confidence as they recover from cancer. And my first ever yacht race took on a particular poignancy as I have been lucky enough to have had cancer and survived.

So, first of all, the sailing: 1,533 boats started the race and thankfully we were one of the 985 that finished in a time just over 10 hours. With gusts of 40kt or more and the tidal overfalls at the back of the Isle of Wight, it got pretty rough… and this is where most of the casualties succumbed. Some fleets were even cancelled at this late stage.

My previous exposure to sailboat racing has primarily been to the Olympic and Paralympic classes. I have seen plenty of footage of larger races like the Round the Island and Sydney Hobart and it always intrigued me how the volume of boats don’t simply just run into each other; now, being one of those boats, it didn’t feel as claustrophobic as I thought it would. There was order to the untrained eye’s chaos.

With a great skipper, South African Cath Vise, the focus was on safety and an enjoyable day rather than beating Phaedo3 to a new record. Considering her cargo of relative sailing novices and cancer survivors, Vise was a great choice for the job. Even when the waters were rough you always felt safe.

That was the sailing experience. The next thing to talk about was the charity and the other ‘c word’ that people often shy away from. Cancer. I have never been a person to try to hide something that has obviously had a massive impact on my life. But how do you talk to someone about cancer when they haven’t had it? It’s the same with anything, you can only have a real two-way conversation with someone if they have been through a similar experience. This was the real takeaway on a personal level. I have always answered questions about my cancer, I actually encourage people to ask, but having someone to talk so frankly to is something different. There is no awkwardness there at all. It’s just two people trading war stories.

Before the age of 15 I had been a very active child. At 15 and diagnosed with cancer that all rather stalled. However, I was adamant that even through eight months of chemotherapy I would try to do as much activity as I could manage. I honestly believe that being active helped me through the treatment with little ill-effect. But why am I telling you this? Because the Round the Island Race and sailing onboard one of the Trust’s boats just confirmed my own thinking and the point of the charity itself.

Seeing young people out in the fresh air, being active and gaining that confidence back is very uplifting. Sailing is now my job and is my present and future. Cancer is in my past and part of my history.

I came in to this job to try to show the human side of sailing and of the personalities of the sport who are littered across the world. This race has just confirmed to me that sailing is more than just racing and a result on a piece of paper. It’s a way of life that goes far beyond a trophy or medal. Sailing offers a great camaraderie and community.

I didn’t win anything from the Round the Island Race, but that wasn’t the point of it for me or for hundreds of the other boats. Before I did the race I didn’t get ‘it’. What’s the point of racing if you don’t win or get anything? I get ‘it’ now, but I still can’t explain ‘it’ to anyone who was in the position I was in beforehand. You want to know what ‘it’ is, my only advice is go out and discover for yourself. Because that’s the only way you will find out.
Richard Aspland, press officer World Sailing