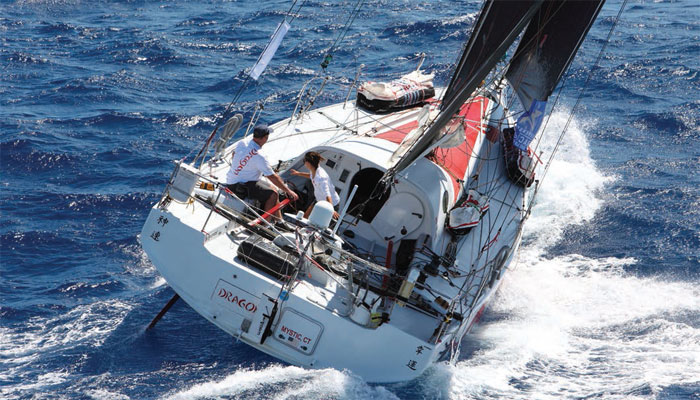 More than one in 10 sailors racing this year’s Caribbean 600 were women. It may not sound a lot, but a trend that is absolutely crucial to the future of the sport is finally accelerating fast again and in the right direction...

Many teams and events have full sailing calendars for the first time in two years, and it is great to feel the enthusiasm with which the sailing world has returned. Illustrating this, the 2022 RORC events to date have both broken records; the eighth Transatlantic Race with a record 30 entries, and the Caribbean 600 with 74 entries and 738 sailors, of these 85 were women.

At only 11.5 per cent of the total crew in the Caribbean 600, this may not seem like a number to celebrate, but it counts as another step in the right direction. A good number of these women are graduates of the Magenta Project’s (TMP) Mentoring Programme.

Now in its fourth year and more successful than ever, the programme pairs ambitious up-and-coming sailors with seasoned professionals who help guide their way to success in the industry. Read more at: www.themagentaproject.org/mentoring

Some of these women shared their Caribbean 600 experiences in a series of post-regatta catch-ups; the usual mix of relief to have made it, frustration at retirements and breakages, keenness to do better next time, and pride in ticking off one of the big ones. Despite the parallels between them, all had very different experiences as women within their teams; one sailed on her full-time double-handed command, one in her first race on a Class40, one on the bow for the umpteenth time, and another in her first RORC race.

Main picture: Magenta Project mentee Cole Brauer on Class40 Dragon. The 11 per cent of sailors in the RORC Caribbean 600 who were women was actually slightly down from 12 per cent in 2019; but initiatives such as the TMP Mentoring Programme are working hard to place more women in these core events and the signs are now very encouraging for the future

It is all too common to feel out of the loop in the sailing world, missing out on crewing opportunities and knowing the scarcity of functional platforms on which to advertise them. ‘It’s all about who you know,’ they say, and sure enough these female positions were mostly filled through mutual friends and repeat or permanent crew, though the dock walk route paid off for some who happened to be in the area. Underrated and underused platforms such as RORC Crew Match and Tendrr.co possess huge potential to fill this void, growing to meet demand and be used to purpose.

Once onboard, there’s a sense that women must focus on speaking up and being heard, with insecurities or shyness coming off as lack of knowledge and experience. With strengthening networks, female sailors are finding their voices on boats sooner. Many times, they are also naively and wrongly assumed not to be strong enough nor have the potential to be. Cliodhna Connolly (second bow, Swan82 White Rhino), sailing with three other women, was met with no such assumptions: ‘it helped hugely that each of the females were tough and fearless, with a high level of physical strength, agility, and fitness in addition to their sailing skills.’

This shift towards open-mindedness is aided by skippers and owners putting together the teams they want around them and the experience they need, gender aside. When asked about her crew, Cliodhna says ‘several of the crew I have raced with a lot fully respect my level of experience, physical fitness, mental toughness and lack of fear and don’t treat me any differently from anyone else onboard.’ While Saoirse Reynolds (bow, Reichel Pugh 37 Taz) found that most of them respected her, listened to her suggestions and decisions and treated her as a valued member of the crew. There were exceptions to this, though nothing she hadn’t experienced before.

Pamela Lee (Class40) in the double-handed side of things excitedly shared: ‘I get along very well with Andrea (Andrea Fornaro), he treats me as an equal. He is a much more experienced sailor, but he also has very much given me the opportunity to grow and excel.’ On a different Class40, Cole Brauer admits that ‘though I am treated very well, sailing double-handed is always a little tricky with differences of opinions since we are actually both solo sailors sailing together. However, when it comes down to it, our lives are made easier having another human onboard to bounce ideas off of instead of talking to ourselves.’

Not surprising then, despite adversities and retirements, all of these sailors said they would do it again in a heartbeat, and all will continue working with their respective teams for future races.

So, we thank the White Rhinos, the Dragons, the Tazs, and the Andrea Fornaros of the sailing world, putting together teams based on experience, and even taking a chance on inexperienced young women and men equally. If you currently sail with an all male team, maybe you too could give it a try… you might just find that sailing with good female sailors is just as competitive and fun as sailing with good male sailors.

Click here for more information on The Magenta Project »