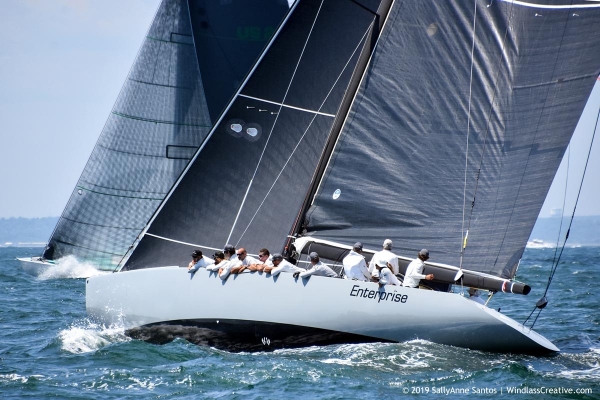 Originally Listed $1,500,000 - NO RESERVE AUCTION, SELLING TO THE HIGHEST BIDDER.

Following a number of years in Europe, initially as a ‘trial horse’ within Italian and French challenges for the America’s Cup and several years as a ‘cruiser/racer’, ENTERPRISE returned to the US in 2007.

In 2016 a client approached the Sparkman & Stephens office searching for an S&S designed 12 Metre built in the US, with the potential to win. ENTERPRISE was the perfect ‘fit,’ particularly as according history or folklore: she missed out on being defender of the Americas Cup in 1980 by the  ‘flip of a coin.’ The project commenced in July of 2017 with the goal to win the 12 Metre World Championship to be held off Newport, RI in 2019.

Following the removal of her ‘cruising interior’, including engine, machinery and plumbing, she was measured in the water as per the 12 Metre Rule. Every item of hardware was then removed and the hull re-faired and finished. A thorough examination of her construction was undertaken followed by a laser scan of the hull, interior and appendages. From those scans 3D models were created to facilitate extensive design studies, which included:

-Performance analysis of rig and sails by North Sails

For the 2019 summer season culminating in the 12 Metre World Championships, ENTERPRISE was under charter to a highly experienced skipper with a topflight crew. Limited time for work-up and tuning provided a challenge, but her results were impressive as her pedigree showed quickly. In her first competition in Newport last summer, ENTERPRISE posted a pair of 1st's in the two final races. In the 2019 World Championship in Newport she finished a solid 2nd overall in the Modern Division. She is proven. For the 2020 sailing season, all ENTERPRISE needs is a wardrobe of sails and a competitive team capable of working her up to speed.

Here is a link to the Nov. 2019 article in Yachting World on the multi-year renovation of ENTERPRISE:
https://www.yachtingworld.com/extraordinary-boats/enterprise-restored-12m-americas-cup-124033