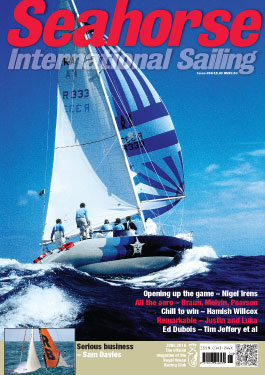 Closer closer
Under 7,000kg for the first time but sailing even higher and faster, ROB WEILAND looks at some of the more subtle TP52 developments for 2016

Coming in from the cold…
The growth in fast composite cruising cats has yet to be matched by a growth in opportunities for well organised but ‘sensible’ racing. NIGEL IRENS

Hidden world
Until America’s Cup 2013 boat aerodynamics were addressed by few designers outside the C-Class. But not any more… explain PETE MELVIN, JB BRAUN and BILL PEARSON

Update
ED DUBOIS created the first modern superyacht and now he is gone. Plus GILES SCOTT and a very bad day at the leeward gate, two Fireball world champions together as BOB FISHER chats with STEVE BENJAMIN, a nod to RON AMEY from navigator PAUL ANTROBUS and sorting your AC ducks out in time with JACK GRIFFIN

World news
VINCENT RIOU will not be taking foils around the world with him, VPLP will design the foiling Figaro 3, as rival designers fume, New Zealand aims to fill in a rather irritating gap… Rio waters hold few fears for MAT BELCHER’s tight 470 team, PETER HOLMBERG does his bit, as DAVE PEDRICK and GARY JOBSON get the laughs. DOBBS DAVIS, IVOR WILKINS, BLUE ROBINSON, PATRICE CARPENTIER, ANDY RICE, CARLOS PICH

Rod Davis
Don’t be afraid to share to get ahead

World Sailing
Surviving after the Olympic circus moves on

ORC column
Looking after the little ones. DOBBS DAVIS