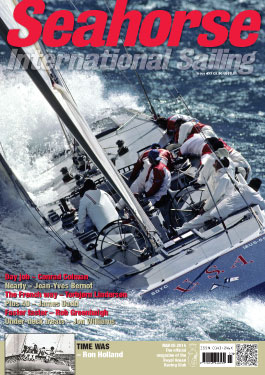 Reflections
Forty years after bursting onto the design scene as one of the ‘golden child’ generation of the 1970s, RON HOLLAND reflects on the journey since... and then considers how things may yet turn out

From Venice with love...
ROB WEILAND looks at the good and the bad of how we are currently running our international racing and introduces some of the best boats in the 2016 pipeline

Put down the transmitter
CONRAD COLMAN is a man on a mission... the 2016 Vendée Globe. In the meantime he’s been keeping the wolf from the door working alongside top routeur JEAN-YVES BERNOT

A gently narrowing space
After a rush of development, design progress in the thriving Class40 is mostly now about the details... unless you are faced with a diverse new suite of performance targets. MERFYN OWEN

The backwards way forward
Front to back or back to front, TORBJØRN LINDERSØN compares the French way of doing business with traditional Anglo Saxon methods

IRC
JAMES DADD thinks we are going the right way, but with the cart in front of the horse...

Sailor of the Month
Largely unsung but brilliantly deserving...