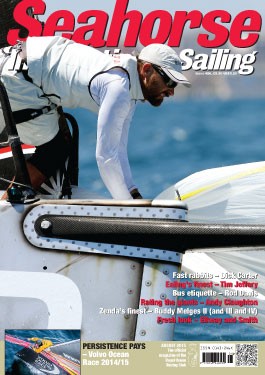 Dream start
Eight brand new custom-built grand prix racers (and one 2014-turbo) went to the line in Valencia. ROB WEILAND has plenty to be proud about

Some family
The Melges sailing dynasty is without parallel. BILL GOGGINS and DAVE DECKER catch up with all three of the most recent generations…

Improving the breed
Little is heard these days of DICK CARTER, one of the most influential offshore designers of the modern era. But life still offers plenty of interest, as CARTER explains to JOHN ROUSMANIERE

Update
A very special Australian (though reclaimed by London for all the good bits), TIM JEFFEREY remembers ALAN BOND and the events leading up to the 1983 Cup Match. Plus the 2017 Cup format just grew again and BOB FISHER is all in favour of San Francisco’s 12 Metre contest

Seahorse build table – Moving (swiftly) on
Foil-innovator IAN WARD continues on the trail of the fast, manageable and affordable foiler

Sailor of the Month
Mighty achievements… plenty of significance