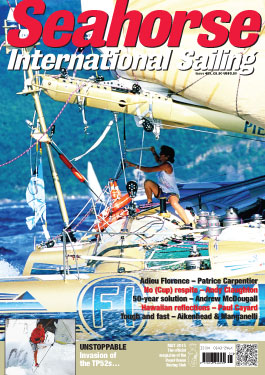 Gaining (serious) momentum
DAMIAN FOXALL, SIDNEY GAVIGNET and ALEX PELLA were a few of the big names who joined EFG Sailing Arabia – The Tour for 2015

How did we get here?
BAR technical director ANDY CLAUGHTON looks at the backdrop to the genesis of the AC62s that will race in Bermuda

Paul Cayard
And finally there is a new Maxi class worthy of the name. Plus old school in the Molokai Channel

ISAF column
And it’s a warm welcome back to these pages, with the first edition of our newest column penned by ISAF President CARLO CROCE

Design – Offshore potential
DOBBS DAVIS takes a close look at the latest, tasty and offshore-capable 33-footer from the combination of JASON KER working alongside McConaghy Boats

Seahorse build table – Game changer?
The new Vrolijk 52 that got chief measurer JAMES DADD ruminating about just how much it is possible to do with the ‘modern racing yacht’

Sailor of the Month
Our aim has never been to try to make this easy...