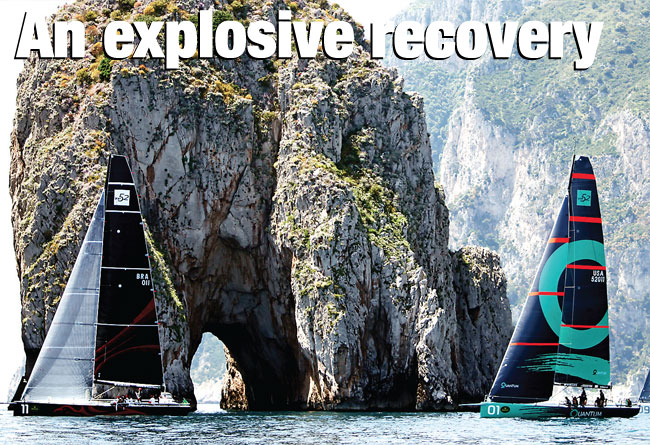 The TP52s could be back into the mid-teens next year with at least six new boats as ROB WEILAND discovers...

Rolex Capri Sailing Week was for the first time integrated with the Barclays 52 Super Series and the outcome was a success from any angle you looked at it. The owners and sailors who had never raced at Capri before were unanimous that this small island in the beautiful setting of the Bay of Naples fully lived up to their expectations. Rolex and the Yacht Club Capri are impeccable hosts.

The world’s largest luxury watchmaker and what must be one of the world’s smallest yacht clubs made for an endearing combination. The island and village of Capri were stunningly beautiful, the weather, as feared, light. But guided by the expertise and charm of chief race officer ‘Luigi’ Peter Reggio we got six proper windward-leeward races and a fair result. The coastal race got off to a good start but was left stranded by lack of breeze among the sheer beauty of the rocky Faraglioni pinnacles at Capri’s southeastern corner. When the race was abandoned Gladiator and Vesper had a solid lead over the seven boats trying to catch them. Tough decision for the two leaders, but also for Luigi.

Nine TP52s are a good start to the 2014 Barclays 52 Super Series, Capri is a good start, Azzurra winning is good and a welldeserved finish for the team that never gives up but that did not seem capable of matching Quantum Racing in Key West and Miami.

Jim Swartz, driving his 2008 and much-optimised Vesper to second overall and best owner-driver, had a strong week, guided by a calm but determined Gavin Brady. This result was based on good starts and boatspeed that matched the newer boats. Quantum Racing scraped through to third but only just, in the end leading Niklas Zennström’s Rán Racing by just 1pt.

Eduardo de Souza Ramos helmed his brand new Phoenix to a dream start. A first in its first Super Series race. From there on they were always in the mix to finish 5th. Tony Langley’s Gladiator with a certain Slingsby calling the shots in 6th, Provezza 1pt more in 7th and Paprec and B2 in 8th and 9th. Much can be said, the results certainly do not tell how close it often was.

Next up is the Audi TP52 Worlds in Porto Cervo. It will be nailbiting again. This time we have an unusual mix of three coastal races with only two days of windward-leeward racing. The rocky scenery of the Costa Smeralda will be exploited to weave the fleet through the islands in a pattern that for sure will lead to a few frustrations but also to a worthy winner. Again nine boats: Vesper is on her way to the US east coast and is replaced by the Italian TP52 Hurakan, last year’s ORCi World Champion (ex- Powerplax/Oracle).

In Capri we were not just racing and enjoying life. Decisions to build and buy for the 2015 season were made there and then. The owners of Azzurra, Quantum and Rán pushing the button on new boats might not be a surprise, but to learn that two other teams are to join them, one already building, to make it five new boats already on the go this early in the year, is more than good news.

On top of that the owner of Paprec Recyclage, Jean-Luc Petithuguenin, shook hands with Niklas Zennström to close the deal on the existing Rán to change hands after the final event in Ibiza. Jean-Luc and the Paprec team committed to the 52 Super Series 2015 with a new boat – superb!

With one US team already having indicated they will join the full 2015 series as well, I am optimistic and up my prognosis for the coming year. Traditionally the decision on where and what to race is made between August and November; if you include Phoenix, with six new boats and two 2011/12 boats committing to the 2015 Super Series, it is already possible that we’ll see as many as 10 new boats and starts with between 12-15 boats in 2015!

Where can you go to watch this and pinch my arm? The calendar will be released during the 2014 Copa del Rey, so first week of August. With so many new boats we feel we shall stay in the western Med and possibly extend to the Atlantic coast of Portugal and not start crossing oceans again til the end of 2015. So expect us in places like Capri, Porto Cervo and Palma. Increasingly popular also is our big brother, the Mini Maxi. With that fleet reaching critical mass to have proper fleet racing with boats all on the 72ft limit, as well as Mini Maxi owners racing TP52s (or vice versa) and certainly the nucleus of many of the crews racing in both fleets, it is of growing importance that we streamline the 52 Super Series scheduling with that of the Mini Maxis. This will mean that from 2015 choices have to be made when it comes to joining existing events. We cannot both race at the same time at Copa del Rey or Rolex Capri much longer. I am sure that together we can work out a schedule that brings us to the places where we like to race and to keep enjoying the friendships that we have built over the years.

Finally some words to the many people who ask how it is possible that the TP52s got back on their feet... look no further than the many TP52 owners who have through the years supported the class and with often surprising confidence supported the many changes that were required to upgrade the TP52 Rule to produce the new boat, of which Phoenix is the first taste. Her name so well chosen, for other reasons but nevertheless. Three of our boat owners, Alberto [Roemmers], Doug [DeVos] and Niklas [Zennström], initiated and underpin the current 52 Super Series. They have initiated so many enterprises in their successful careers, but this one has my heart and admiration. I am sure many sailors agree with me for once. Onwards, no time to rest…