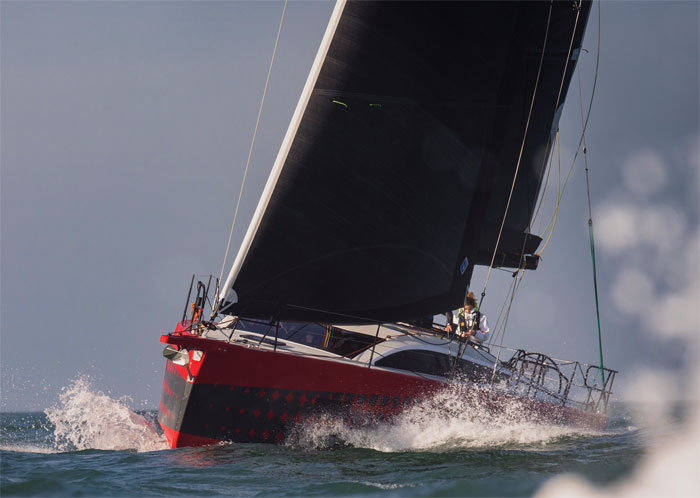 Fast and light, a mix of the finest traditional and environmentally-kindest modern materials, no wonder that 2022 Route du Rhum winning designer Marc Lombard is so proud of his successful association with RM Yachts

Walking around a boat show or a big marina, it’s easy to conclude that all modern cruising yachts are basically the same. Then you’ll see something like an RM yacht and realise that it’s not true at all. Distinctly different from most of their peers in both concept and construction, RMs have earned a reputation over 35 years for being practical and durable, seaworthy and fast. 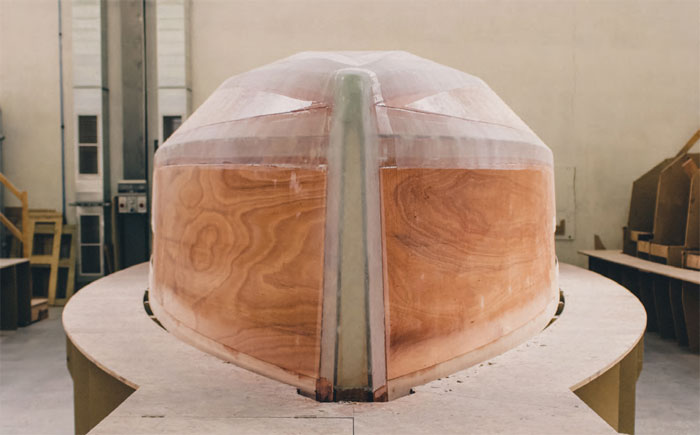 RM hulls are built without any moulds. The multichine shape is inherently stiff and it adds a useful bit of extra form stability

Most of today’s cruising boats have hull features loosely derived from ocean racing. It’s now the norm to have broad aft quarters with hard chines for extra form stability, twin rudders, a shallow bilge and a high-volume bow. Mast steps are moving aft in the hull. What sets RM apart from most other builders, as the shipyard’s commercial director César Dohy explains, is a very strong emphasis on ensuring their boats’ displacement remains light enough to take advantage of these design features. Despite being a blue water cruiser the RM 1070 for example has the same displacement, ballast ratio and sail area : displacement ratio as a typical offshore racer-cruiser of the same length.

Below: Far from a typical cruiser. RM yachts don’t just look different, they are different in many ways

One of the key factors in achieving lighter displacement is that RMs are built in epoxy-plywood with foam sandwich decks. Contrary to what you might expect, epoxy-ply has a very high strength-toweight ratio. Some of the weight saving is used to strengthen the boats’ internal structure, which includes a steel frame that bears nearly all rig and keel loads. The multi-chine shape of an RM hull is inherently stiff and like a racing boat the internal structure is laminated to the hull, rather than set in place with mastic like a typical GRP cruiser. The first RMs from the late 1980s are still sailing with no structural issues, which says a lot about their longevity. The current boats are even more durable.

The ease of repairing plywood is a big advantage for blue water cruising. ‘Most of the world’s fishing boats are wooden so the repair techniques are well-known everywhere,’ Dohy says. ‘Or you can do it yourself with plywood and glue. For temporary repairs you don’t even need epoxy. You can use Sikaflex, which is useful because even when it’s wet it can stick.’ 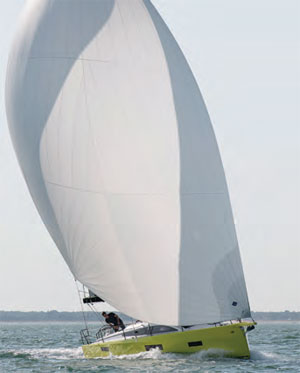 Above: RM yachts have a huge amount of sailpower, especially downwind

How come other yacht manufacturers aren’t using epoxy-plywood? Many small-scale builders are, Dohy explains, ‘but it’s not good for high-volume industrial production because you have no moulds. Making 10 boats or 200 will be the same cost per boat; it’s quite close to a one-off building technique.’

A key strength of the RM brand is that all of its hull shapes, sailplans and deck plans have been developed and incrementally refined over three and a half decades by the same design team, which just happens to be one of the best in the business. Marc Lombard’s achievements in current ocean racing innovation speak for themselves. And it was Lombard, right at the outset, who suggested epoxy-ply as the optimal building material for RM yachts and designed them accordingly.

True to their focus on offshore voyaging, RM yachts are optimised for downwind performance. ‘We have very precise numbers on wind angles through the Grand Large Yachting group,’ Dohy says. ‘Some Outremer cats went around the world and recorded all of their wind angles. They were sailing upwind not even 10 per cent of the time, because when cruising you have the time to wait. The plan is not sail upwind across the North Atlantic.’ 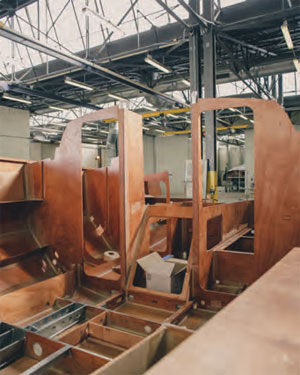 Above and below: Like a good raceboat RM yachts feature strong, stiff internal structures. A steel frame takes keel and rig loads while the plywood frames are epoxy-encapsulated 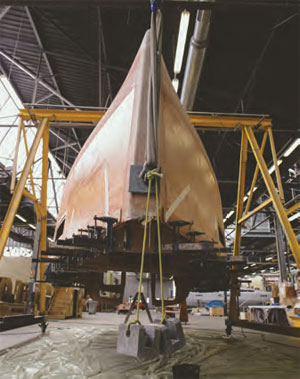 The Lombard design office has put a lot of R&D into a new generation of twin keels, designed specifically for RM yachts. Twin (or bilge) keels have been out of favour in yacht design since the 1980s when they were notorious for poor windward performance. Lombard’s short-chord, highaspect twins are a huge improvement on the traditional type with a lot more righting moment and much better hydrodynamic efficiency. RM also offers fin and lifting keel options, but Lombard’s twin keels have narrowed the gap in performance.

‘They are still slower than the single keel versions but the difference is marginal, like 0.2kts when sailing upwind,’ Dohy explains. ‘When reaching or sailing VMG downwind you see no difference in boatspeed. The twin keels’ surface area is almost the same as a single fin keel, the ballast weight is the same and the stability curve is similar. There is a little bit less righting moment but you will not feel it. Comparing STIX numbers, it’s a difference of one or two out of 35, so almost negligible.’

The great advantage of twin keels, of course, is that you can dry out upright in tidal harbours and anchorages. It’s one reason why RMs are popular in Brittany where many of the smaller and nicer havens are off-limits to fin-keel yachts. ‘It’s part of the specification and part of the brand,’ Dohy says. ‘The centre of gravity is around the keels, which take nearly all of the load. For stability you also have a reinforced rudder that acts as a leg, with a grounding plate at the tip so it can’t dig into the mud.’ For blue water cruising the ability to dry out, and to stand on the hard without needing a cradle, can greatly simplify repairs and maintenance in remote areas. By contrast, many GRP cruisers simply aren’t built strongly enough to stand on their keels without additional support.

Whatever keel type is chosen, when going upwind RM yachts are designed to sail fast and free. ‘Our advice is not to sail at 40°, that’s much too high,’ Dohy says. ‘Obviously there is a difference between the keel options. With the lifting keel you have a 3m draught which is huge so you can sail a bit higher but that is not the point. Like offshore racing boats we’re trying to sail quite low – at 55 to 60° – but fast. It’s a French thing, we call it offshore upwind.’ This makes sense because when sailing close-hauled in short chop or large waves, even a boat that can point high on the wind will generally make better VMG by pointing lower and sailing faster. 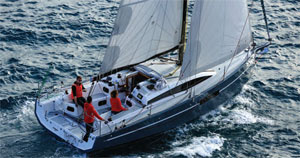 Above: The cockpit layout is unusual with primary winches next to the companionway – not on the coamings

Another key difference from most other cruisers is the cockpit layout and deck plan. ‘It’s all race inspired,’ Dohy says. ‘We don’t have genoa tracks any more. And there are no primary winches mounted on the coamings because I think it’s quite dangerous – it puts you in an insecure position on the leeward side.’

Dohy’s own offshore experience in events like the Fastnet or the Transat Jacques Vabres and 15 years designing sails for the grand prix sailmaker Incidence Sails have begun to inform the cockpit design of the RM range. ‘I’ve been racing for years and I can tell you that it’s actually much easier to manoeuvre an Imoca 60 than a large family cruiser,’ he says. ‘That’s incredible to me. So we’ve tried with RM Yachts to have this facility, to be able to manoeuvre the boat singlehanded with as little load as possible. That’s why we have only four winches around the companionway, where you can sail the boat efficiently in the shelter of the sprayhood. That’s also race inspired. On an Imoca 60 these days you don’t need to wear your foul weather gear most of the time because you have so much shelter in the cockpit; our boats are similar with the sprayhood up. And we fit very powerful autopilots with remote control so you can steer with the pilot at all times.’ One thing in common with a normal cruising layout is that the cockpit seating area is safely free of ropes and winches.

The current RM range has five models from 8.9m to 13.3m (29ft to 44ft) LOA, all of which have huge interior living space for their size. They could easily produce much larger yachts and may do so in future ‘but we are not keen on following the general trend of making bigger and bigger boats,’ Dohy says. ‘We do like our small boats. And even a nine-metre RM is not a small boat. Families cruise around the Atlantic and the Med in our RM 970, which has everything you need to go offshore.’