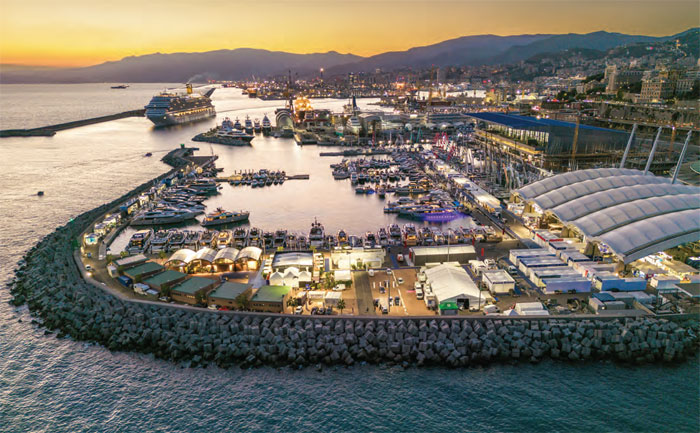 In 2020 a group of brave organisers were determined that it would be business as usual in one of the industry’s most difficult years to date. Today, the Genoa International Boat Show is reaping the rewards

In the top tier of international boat shows, one show in particular is thriving and growing steadily in terms of its reach, scope and influence. The Genoa International Boat Show, staged every September right in the heart of the ancient maritime city, is effectively five different shows in one, it boasts more than 200,000 square metres of exhibition space in total and showcases about a thousand different brands, with large separate areas devoted specifically to sailing boats, superyachts, motorboats, next-generation marine technology and nautical tourism (which includes sailing schools, clubs and class associations). There’s plenty of interest on offer for any sort of boating enthusiast, with a grand total of a thousand boats on display in 2022, a number that will increase next year thanks to the creation of 200 new berths to satisfy a growing demand that saw exhibitor spaces sold out for the 2022 edition as early as June.

The only European boat show that managed to avoid being cancelled in 2020, thanks to its organisers’ ability to put on a Covid-safe event, Genoa always sells out of exhibitor space months in advance of its gates opening to the public. Last year it also came quite close to selling out of visitor tickets and reaching its maximum threshold of 115,000 people, with almost 104,000 attendees – up about 11 per cent on 2021.

‘We were delighted with the 2022 edition of the Genoa International Boat Show, both in terms of attendance and in terms of the quality of the clients who came to visit our boats,’ says Veronica Bottasini from the Cantiere del Pardo shipyard. ‘This year we changed location, moving to the most central section, which allowed us to bring together our three brands, Grand Soleil, Pardo Yachts and Van Dutch, all around a single stand. It was a dream come true and we were thrilled with the location, especially in view of the Waterfront project that we will finally see come to fruition next year.’

Main picture: with the high concrete wall that used to bisect the marina now demolished, Genoa Boat Show has a much more open feel and the flow of visitors strolling around the pontoons has been greatly improved

These days the Genoa Boat Show is a lot more than a showcase for the ‘Made In Italy’ brand, although it does that very effectively indeed with almost every Italian boatbuilder, shipyard and equipment manufacturer represented and the show itself run directly by the Italian Marine Industry Association – essentially by the exhibitors themselves. If you’re a fan of the quintessentially Italian style of sleek, high-performance monohull sailing yachts then this is most definitely the show for you.

But Genoa now also draws a large proportion of the major sailing, yachting and boating brands – multihulls included – from all across Europe and beyond. Indeed it has become one of the key shows where large numbers of new models make their début. Last year alone, for example, exhibitors came from 35 countries and 168 new boats were launched at Genoa. As a result the show attracts a lot of media attention with last year’s tally including 11 hours of TV coverage, 42 hours of live streaming and a social media reach of more than a million people.

Genoa is also heavily invested in promoting sustainable innovation and its pioneers, dedicating exhibition space and events each year to promote start-ups selected from the Italian Start-up initiative, thanks to the organisers’ partnership with the Italian Trade Agency. The show also holds the Design Innovation Award, a ceremony that awards the most innovative designs among those showcased by the show’s exhibitors, selected by an independent jury made up of national and international experts, to highlight designers’ and manufacturers' ability to conceive and implement ground-breaking design choices, research and sustainable innovation.

A fundamental redevelopment of the show’s location is currently under way, with one major change already delivered in 2022. This was the removal of the high central wall that used to divide the on-water part of the show into two separate halves. With the wall gone, the flow of visitors strolling around the pontoons and docks was vastly improved and the view from the onshore parts of the show was transformed into an unobstructed, panoramic seascape.

…The 2022 show went very well and we are increasingly happy with the outcome,’ says Roy Capasso of Nautor’s Swan. ‘We offered both sail and motor this year and with the demolition of the central wall, we were able to give our line-up a greater sense of continuity. The construction may have been an inconvenience but it represents great potential for the near future.’

Below: the Blue Pavilion provides shade and shelter for some of the yacht berths as well as a major hub for indoor exhibitors. Next year it will become virtually an island with a new 200- berth yacht basin on its landward side. 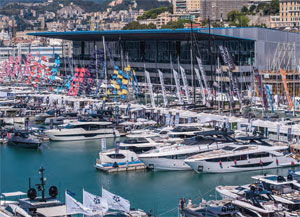 The big news for next year’s show is that the city’s ambitious €300 million plan to renovate and redevelop the entire eastern waterfront in a scheme designed by the maestro architect Renzo Piano is now coming to fruition, the impressive scale of which could already be felt in 2022. With only a year or so left until completion, the renewed Genoa International Boat Show will soon have all the cards to become one of the top shows in the world.

The 63rd edition of the Genoa International Boat Show, due to be held from 16 to 21 September 2023, will see the whole showground transformed. The enormous multi-storey Blue Pavilion, the main indoor hub of the event, is effectively becoming an island with a new yacht basin created on what used to be its landward side, facing the city centre, offering a further 200 berths for exhibitors’ boats during the show.

Beyond the boundaries of the current showground, the Eastern Waterfront scheme continues. It is set to further enlarge the boat show from 2024 onwards with the addition of a second large indoor exhibition space, the circular Pavilion South. The scheme also includes new business and residential buildings, sporting facilities, a large new expanse of parkland and areas of bars and restaurants.

One of Genoa’s great strengths is that unlike most other large boat shows, nearly all of the boats can easily get in and out of their berths at all times, through the well sheltered outer harbour and then, weather and sea state permitting, straight out into the open water of the Mediterranean in a matter of minutes. Serious buyers can therefore be taken out for a sea trial during the show rather than having to book one several weeks later in a different location that could be thousands of miles away.

This facility alone gives a substantial boost to the number of boats actually sold at the show and adds a huge amount of value for visitors and exhibitors alike. For boat buyers, it’s a unique opportunity to arrange sea trials aboard their entire shortlist of boats in the course of a single visit, experiencing each boat in the same wind and sea conditions on the same day and thus being able to compare them objectively. Which yacht has the best helm feedback and which one has the most comfortable motion at sea? Which cockpit layout works best for your family crew or racing team? It’s a very efficient way to make an informed decision.

Another unique aspect of the Genoa Boat Show is the vast amount of sheltered outside space. While other shows are held hostage by the whims of the weather, be it scorching sunshine or heavy rain, Genoa has a huge tensile canopy over a large part of its outdoor exhibition area and the Blue Pavilion’s roof extends over some of the floating pontoons, providing shade and shelter. ‘There were lots of visitors this year even on the day when we had bad weather,’ says Piero Napolitano of Jeanneau Yachts. ‘Visitors were eager to get on the boats and explore. We also achieved a decent number of sales. At the moment we can say we are indeed quite satisfied.’

Below: Genoa’s strongest suit is the wide availability of sea trials during the show. In just a few minutes you’re out of the harbour and straight into the deep blue sea

The show’s proximity to the historic city centre (which is on the UNESCO World Heritage List) also boosts its appeal and Genoa as a whole pulls out all the stops during the boat show to ensure that visitors thoroughly enjoy the experience, with big free-to-view spectacles staged in various locations in the city. 'I have to tell you I was super impressed by the light, music and firework display in the main square,’ said one visitor after the 2022 boat show. ‘There must have been thousands of us there with cameras raised trying to capture some sense of it.’

The unique programme of events in the city centre during the show, aimed at promoting the millennial history of maritime culture in Genoa, makes for a grander experience, allowing visitors and exhibitors to enjoy a city that is already a historic tourist attraction in and of itself.

‘Building on the experience of sixty-two editions, the Genoa International Boat Show can count on a unique heritage, capable of uniting history, knowledge, knowhow, design, technology, innovation, sustainability and business,’ says Saverio Cecchi, president of the Italian Marine Industry Association. ‘The true value of this event was acknowledged once again this year by both exhibitors and audience. The 63rd edition of the Genoa International Boat Show will be held from 16 to 21 September 2023.’