If it’s good enough for the Cup... 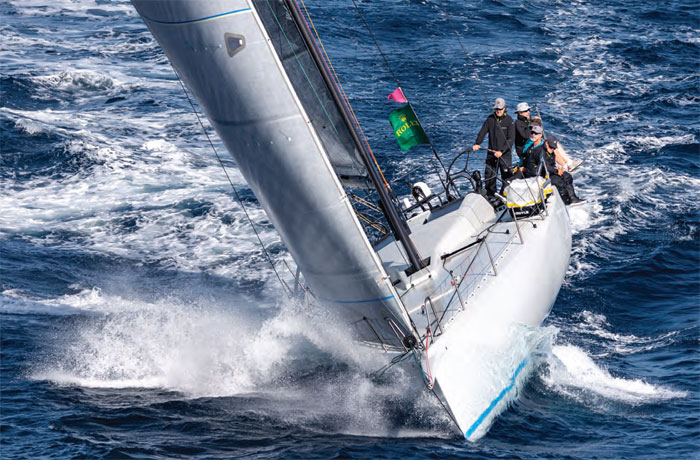 No different to the service they offer their most demanding grand prix clients, Offshore Spars now offers all racing customers the opportunity to precisely match mast bend characteristics to sail design... as standard

After almost 50 years building masts for everything from cruisers to America’s Cup winners, Offshore Spars and its new owners are combining decades of experience with the latest innovations from the aerospace and automotive industries. The result is “bespoke” rigs, masts that perfectly match each boat’s righting moment and sails.

‘Back in the early days with aluminium, you’d just pick a mast section that matched your specs,’ chief technology officer (CTO) Trent Justice explains. ‘Now we're customising the entire carbon laminate so that at a particular wind load, the bend matches the mainsail’s luff curve.’

The best example of this innovative process is the new mast Offshore Spars built for Black Pearl, a Botín 56. ‘They lost their rig in the RORC Transatlantic Race so they approached us,’ Justice says. ‘It was quite a tight timeline, which always makes a bit of extra challenge. But we delivered in the timeframe we set out, without sacrificing our threeand- a half-month design period.’

Main picture: after the Botín 56 Black Pearl lost her mast during the RORC Transatlantic Race, Offshore Spars built a replacement on a tight timeline. The new mast is more durable than the original but also 11kg lighter with a lower centre of gravity

Sailpack software models how a boat will sail through different wind ranges with different sail configurations. One huge benefit, currently unique to Sailpack, is that it can calculate the stretch on multiple cables through multiple wind ranges whilst changing sails. Offshore Spars can provide a sailing tune instead of just the dock tune, which takes the guesswork out of setting up the rig for a particular day's racing.

Perfecting a mast’s specification details requires collaboration, a massive change from what Justice calls the traditional approach: ‘First the customer finds a boatbuilder and a designer, then they choose their mast builder and lastly they figure out the sailmaker,’ he explains. ‘But the interaction between us and the sailmaker is really important, because we need to understand how they want the sail to perform. For Black Pearl, the design process kicked off straight away, with countless calls to get a spec together.’ Like a growing number of industry players, Offshore Spars uses Sailpack to coordinate mast design with Carbo-Link and Doyle Sails.

Once they’ve agreed on the maximum load and a factor of safety, the most important characteristic is stiffness. ‘That determines how the mainsail’s luff curve will change through the wind range.’ Justice says the Black Pearl team is truly professional and terrific to work with, but there was a special challenge for this project. ‘They were keen to save weight but, more importantly, they did not want to lose another rig! So, a strong, robust rig was the primary focus.’

After consultations with their project partners, Offshore produced a rig that is more durable but still lighter than the original. ‘We reduced the overall weight by 11kg (4 per cent) and lowered the COG by 300mm,’ Justice explains. ‘And we removed one of the deflectors, which helped with their ORC rating.’

They came up with these specs thanks to input from Pure Engineering. ‘Pure Engineering works with Team New Zealand, Botín and numerous other designers worldwide,’ Justice says. ‘At Offshore Spars we use them for finite element analysis (FEA). Pure Engineering’s computer power is a massive investment and there's no mast company in the world that could justify it. So, for us to have access to that is huge. They modelled our carbon laminate, then refined it to get it as light as possible – still with safety factors of course but adding carbon only where it's required.’

The significant modifications that Pure Engineering suggested were discussed in detail with the boat’s owner, the team and their rigging supplier, Carbo-Link. ‘Thanks to all the improvements in structured luff sail technology, we were able to reduce loads but keep the same sag per cent of the forestay,’ says Justice. ‘This mast is custom, bespoke to fit Black Pearl,’ he adds, before admitting that they’ve had to learn the hard way not to push weight boundaries too far. ‘We could have gone lighter still, but we stayed on the conservative, safe side of the weight-saving curve for Black Pearl.’

Once the design specs were finalised, the next challenge was procuring the highest quality carbon fibre. ‘Ultra-high modulus carbon is a little rare these days,’ Justice points out, adding that Offshore only uses Mitsubishi composites because they are the best on the market. ‘They make the fibre, and then one of their sister companies impregnates it with resin for us. So it’s a complete Mitsubishi product. There are a lot of cheap alternatives now. As an owner, that would be the first question I'd ask any potential mast builder: what composite materials are you using?’

Construction of the Black Pearl rig began in July. In late August, the finished spar was shipped from the Offshore factory in Michigan to the Mediterranean. ‘Offshore Spars already had the tools to make a good laminate,’ Justice says, ‘so the build process was very similar to what the company has been doing for 30 years. What was needed was an update to the design process.’

Below: the design process for the new ultra-high modulus carbon mast involved intensive modelling in Sailpack software and FEA input from Pure Engineering. 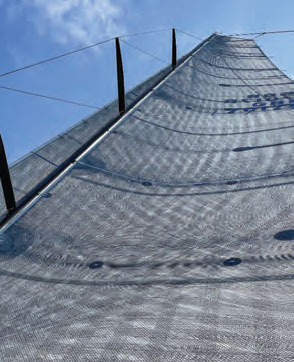 The new collaborative approach to designing custom masts was immediately embraced by Eric Graczyk, the new owner of Offshore Spars, when he took over in January 2022. Graczyk brought with him two decades of experience in the aerospace and automotive industries, which he’s now applying to help modernise and improve the manufacturing facility. ‘We're documenting our process so that new folks can get up to speed quickly as we grow,’ he says. ‘We're also investing heavily in new tooling, which will result in fewer errors and a better-finished product. Some of our workers have been here for a really long time; by adding crossfunctional training we can make better use of our entire team across multiple departments and skill sets.’

Graczyk has already increased the build team’s quality standards. ‘We’re adding checkpoints to each project to ensure nothing is missed. We’re also creating clean rooms that meet high ISO standards and installing better air-handling equipment in our fabrication department to cut down on debris that can work its way into the product. We’re constantly looking to improve how we’re currently doing things, with better tooling and software. And yes, we’re hiring!’ he adds with a chuckle. ‘I’m a Michigan native, so I’m really excited to use my expertise to help a local business grow and improve.’

‘We are not a private equity conglomerate, we are a family-run company,’ vice president Ellen Bloom says. ‘If someone calls us, they get a human on the phone. And if we can't talk right then, we'll call you back. Eric prides himself on being very available to our vendors and our clients and whoever needs to get in contact with us. And he’s the glue between the fathers and sons working for us locally and the engineers and other experts around the world; all are very, very committed to our team. They’re the people who actually get our great products out the door, and they are craftsmen. We don’t talk about them nearly enough.’

Below: they narrowly missed the podium in the Rolex Middle Sea Race, after finding a parking lot towards the end of the race and had to settle for 4th place in the ORC 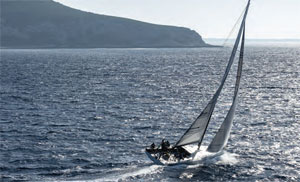 Offshore Spars’ America’s Cup credentials include a win in 1992, when they built the sections for America3. They also built both of the American Magic rigs for the 2021 Cup.

Like all Offshore masts, Black Pearl’s spar was built in a custom male mould as a seamless section, with no joints or glue joins. ‘That has a decent weight saving,’ Justice explains, adding that many of the lessons learned on previous projects were incorporated into the rig that— on its maiden voyage—helped Black Pearl to be placed in the 2022 Rolex Middle Sea Race. ‘When you're designing, you're always looking at the build tools. Now that we're developing custom tooling for each project, we can build the exact shape we need to match a mast perfectly to that boat.’

‘The Offshore team is used to building at a very high level of quality,’ Justice confirms. ‘Now, thanks to Eric’s expertise, we’re improving our quality assurance. But the only thing that’s really changed significantly is the design process. And that’s been really quite amazing, because the spreadsheet Offshore Spars developed over the last 40 years is now validating a brand new, fully integrated software package!’ He smiles. ‘Apparently the old school methods are pretty good still. But the software does improve that last few per cent, which is exactly what we need to take Offshore Spars to the next level.’

‘And Grand Prix sailors are already familiar with the Offshore Spars name,’ Justice adds proudly. ‘At a recent regatta in Europe, I was quite surprised to realise that everybody knew exactly what we're doing. There's a lot of dock talk about Offshore Spars and our bespoke rigs and the fact that we can work with any rigging manufacturer or sailmaker. Quite nice, since it's all positive stuff.’